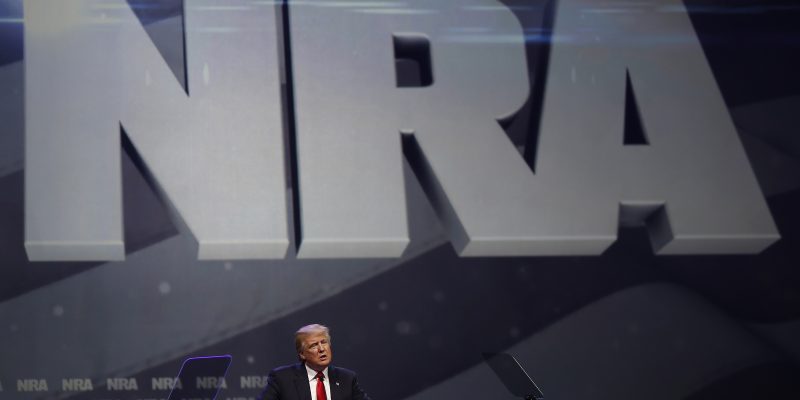 Dallas, Texas – President Trump delivered a passionate speech to a record crowd at the 2018 NRA Convention on Friday.

His speaking style was reminiscent of the tone of his 2016 Presidential Campaign as he aggressively made the case for electing Republicans in November, defending the 2nd Amendment, supporting police & military and securing the border.

The President began by offering his “full endorsement” of Texas Governor Greg Abbott and his former rival, Senator Ted Cruz. The Cruz-friendly crowd roared with applause to which Trump replied “That was rousing… that’s a good sign. I thank you [Ted].”

Trump announced the new poll which has his approval ratings above 50% before moving on to the most important thing to his continued success, Republican control of Congress: “We cannot get complacent, we have to win the midterms!”

He then highlighted job growth and pointed out the positive effect of job creation in the black community and the support of a household name:

“Since the election, we have created over 3.2 million jobs… African-American unemployment has reached an all-time low… my poll numbers with African-Americans have doubled from 11 to 22 percent. Thank you, Kanye!”

President Trump took aim at critics of the 2nd Amendment as he teased, “If we’re going to outlaw guns, Democrats… then we need to outlaw vans and trucks, the new weapon of crazed terrorists.”

In a moment that warmed the hearts of Texans everywhere, the President of the United States told the story of the Battle of Gonzales from the Texas Revolution:

“Those brave Texans raised the flag as Santa Anna’s men watched from the distance and written on the banner.. Come and Take It!”

Trump closed his speech with a rallying cry to the American spirit:

“We will never give up our freedom. Americans were born free, we will live free and we will die free!”

In this humble writer’s opinion and no matter how the mainstream media spin it, this was the greatest speech by President Trump since the 2016 National Convention. It hit all the right notes which should inspire and mobilize his voter base for Republicans in Congress who desperately need to maintain control in order to continue advancing their agenda.

Interested in more national news? We've got you covered! See More National News
Previous Article Morning Consult’s Polling Isn’t Showing Much Evidence Of This Blue Wave The Media Is Talking About…
Next Article Elect A Democrat Governor, Expand The Public Sector And Pass Massive Tax Increases – What Did You Expect, Louisiana?