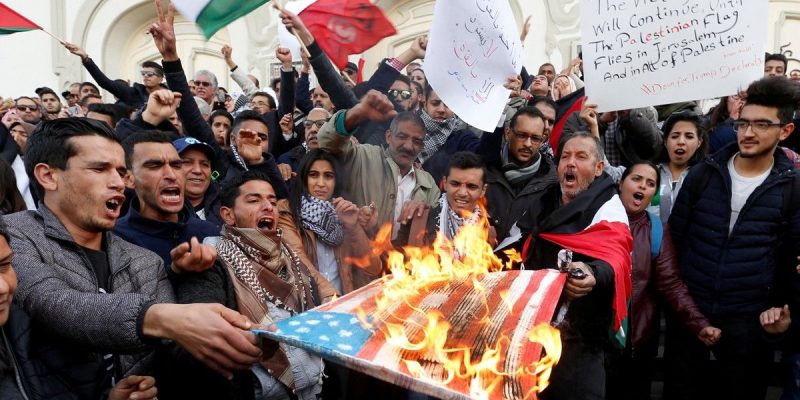 5 or more protesters were reportedly injured by gunfire near the fence dividing Israel and Gaza as protesters swelled into the thousands. All were shot in the legs.

Palestinian sources claim that number to be closer to 22.

The violence comes on the heels of the historic US Embassy opening in Jerusalem and the 70th anniversary of the State of Israel.

Israeli authorities have been bracing themselves for a week of tension and violence due to the volatile nature of both events.

They have deployed thousands of police officers, hundreds of soldiers along the border and destroyed six “terrorist tunnels” via airstrikes over the past six months.

On the eve of the embassy opening, the Air Force dropped leaflets over the Gaza Strip warning Palestinians not to approach the border or engage in violence.

“The Israel Defense Forces is determined to defend Israel’s citizens and sovereignty against Hamas’ attempts at terrorism undercover of violent riots. Don’t get near the fence and don’t take part in Hamas’ show, which endangers you.”

Some reports indicate that the Palestinian Authority is encouraging its citizens to protest the embassy and anniversary of Nakba, or “catastrophe,” their word for the creation of Israel.

At the same time, the terrorist group Hamas is urging followers to clash with “the occupation” and has posted images of the quickest routes to Israeli neighborhoods in hopes of an invasion.

Al-Qaeda leader Ayman al-Zawahri used the issue to call on Muslims to wage jihad against the US in a video released on Sunday.

Hezbollah, an extremist group from nearby Lebanon called the US Embassy move “worthless” and claimed that it would only add to ongoing tensions.

The Palestinians have held onto hopes that East Jerusalem would be the capitol of their future state, a dream that is seeming farther from reach as the United States doubles down on its support of its closest ally with President Donald Trump at the helm.

More about the US Embassy opening can be found here.