Yesterday we had a post about Louisiana Attorney General Jeff Landry and his chairmanship of the recently-renamed Louisiana Committee for a Conservative Majority, and the fact Landry was quoted emphasizing the need to focus on the Louisiana Senate as a body needing adjustment in the 2019 elections. We noted that is, in fact, quite true from a conservative standpoint.

But we wanted to emphasize this, so here’s a graph which combines two main factors – first, the percentage of the vote in the 2016 presidential election garnered by Donald Trump in the Senate districts around the state, and second, the LABI scorecard rating of the senators representing those districts.

We’re using those factors for a couple of reasons which might be obvious but in case they aren’t, the 2016 presidential election is a better measure of the relative conservative strength of the district than the 2016 U.S. Senate election or the 2015 gubernatorial election, because the Edwards-Vitter race was decided more on hookers than on policy and the Kennedy-Campbell race was a lopsided blowout which isn’t really indicative of a true ideological test (though it was that). And we’re using the LABI scorecard ratings as a measure of conservatism rather than, say, those of the Louisiana Family Forum because it’s a lot easier to get a high score from the Family Forum than from LABI; every political worth his or her salt outide of a few urban districts will profess to be pro-God, pro-life and pro-gun, and in fact those leanings have been the substitute for actual conservatism for as long as we’ve been around if not longer. It takes that combined with a commitment to smaller government and lower taxes, which is what the LABI scorecard measures, to truly move Louisiana past its Longite socialist past.

And now, for the disconnect between the professed choice of Louisiana’s voters and the results from its Senators… 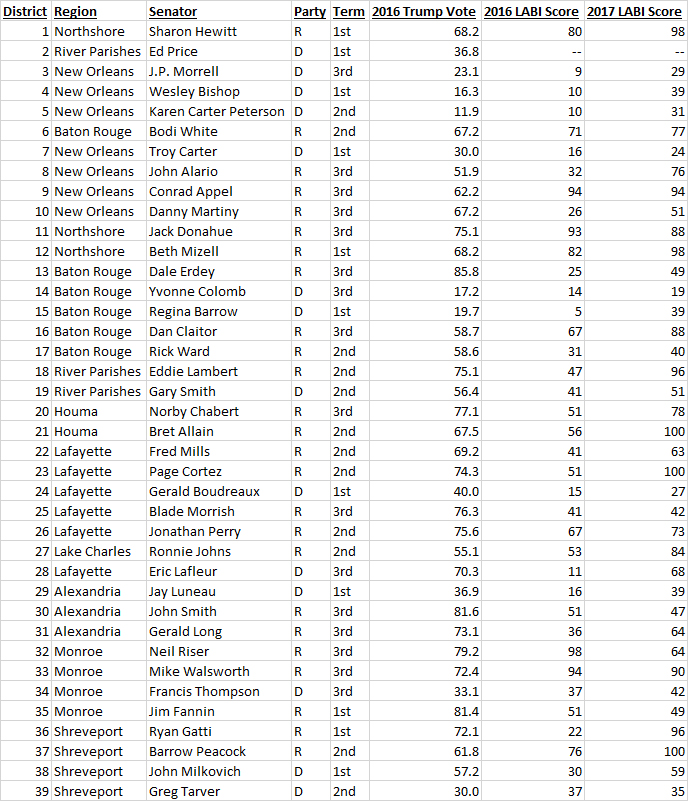 Some of these scores are a bit deceiving, as the 2017 votes represented a sizable jump from prior performance. In the case of Chabert, for example, his LABI score in 2015 was a woeful 34 percent – you can’t count a score like that as acceptable coming from a district which went 77 percent for Trump the next year, regardless of whether Chabert then had a good year after the election. And the fact Gatti scored a 96 percent from LABI in 2017 after posting a 22 score the previous year shouldn’t fool anyone – not when that district went 72 percent for Trump.

Also obvious are some of the pickup opportunities should LCCM be successful in recruiting quality candidates. Lafleur, who is term-limited, is a bit of an odd duck as a Democrat in a district which went 70 percent for Trump. Ditto for Milkovich, a Democrat in a 57 percent Trump district. Gary Smith has withstood Republican challenges before, but he’s in a 56 percent Trump district.

The optimistic view of the Louisiana Senate and the coming 2019 election cycle is that it’s a target-rich environment for LCCM and LABI’s newly-re-energized political action committees; LABI recently hired former Magellan Strategies pollster and political guru John Diez to spearhead its PAC efforts, and Diez is building a machine of his own. Another view would be that the Senate, despite having about a dozen or so conservative warriors who deserve a lot of credit for hanging in there, is an abject joke as regards its representation of the voters.

There’s an old joke that politicians and diapers should both be changed often, and for the same reason. We’ll find out in 2020 whether the smell wafting from the Capitol is redolent of the need for more change, or if the voters managed to finally get it right next year.