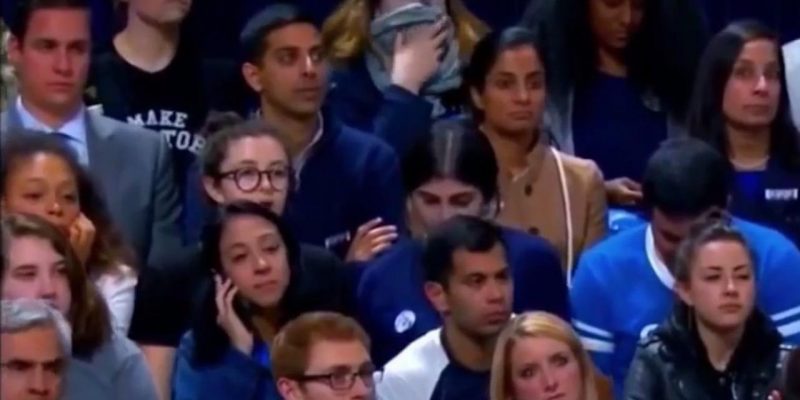 According to a new Reuters/Ipsos national opinion poll, the Democratic Party is losing support among millennials. Of the more than 16,000 registered voters between the ages 18 to 34 who were surveyed online, support dropped for Democrats by 9 percentage points over the past two years.

The poll found that young voters are increasingly arguing that the Republican Party is “a better steward of the economy.”

Although nearly two of three young voters polled said they do not like Republican President Donald Trump, their distaste for him does not necessarily extend to all Republicans or translate directly into votes for Democratic congressional candidates. That presents a potential problem for Democrats who have come to count on millennials as a core constituency – and will need all the loyalty they can get to achieve a net gain of 23 seats to capture control of the U.S. House of Representatives in November.

One big shift, Reuters notes, is that two years ago young white voters favored Democrats over Republicans running for Congress by a margin of 47 to 33 percent; this year that margin changed to young white voters supporting each party by 39 percent. But it’s not only whites who are shifting parties.

Terry Hood, a 34-year-old black man from Baton Rouge told Reuters that he’d consider voting for a Republican after having voted for Hillary Clinton in the last election. He works at a Dollar General store and says that the Republican Party “is making it easier to find jobs and he applauds the recent Republican-led tax cut,” Reuters reports.

“It sounds strange to me to say this about the Republicans, but they’re helping with even the small things. They’re taking less taxes out of my paycheck. I notice that.”

Not all surveyed would vote Republican, the poll found. Some said they were undecided and would support a third-party candidate or not vote at all. 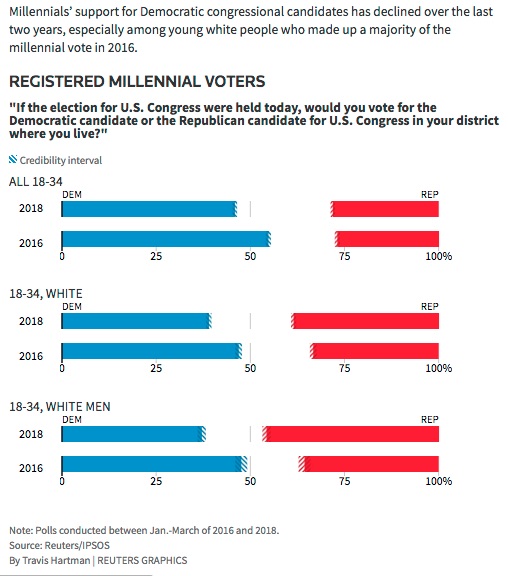 Millennials are nearly evenly split on which party has a better plan for the economy; 34 percent say the Democrats do; 32 percent, the Republicans. But that’s a 12 point drop from two years ago.

Earlier this year, the DNC launched its “IWillVote” initiative primarily targeting millennials to register them to vote. It is also running political ads on social media and in mobile text messages, and plans to pick up students on college campuses on election day to bring them to the polls to vote. The Republican National Committee is targeting young voters through a pilot program being launched at six college campuses

For a graphic on Democrats losing millennial voters, click: tmsnrt.rs/2I1YafW.