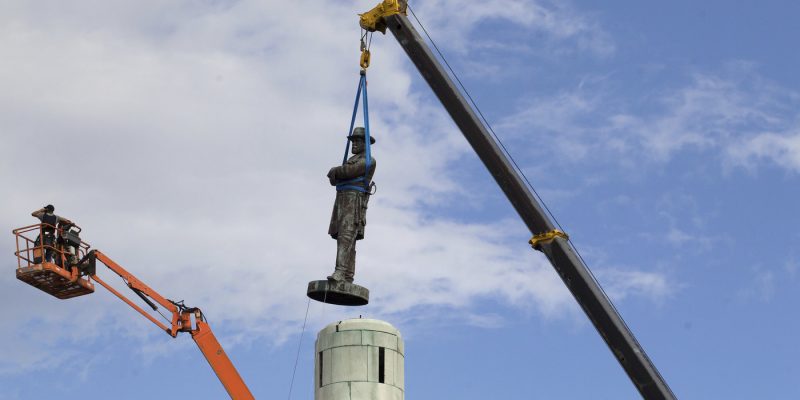 The wacko left won’t leave the remaining monuments to Confederate soldiers alone. Once again, the monument to Charles Didier Dreux, was vandalized by monument opponents.

A statue commemorating Charles Didier Dreux, who was the first Confederate field officer killed in the Civil War, had been vandalized Tuesday (May 1) in New Orleans.

The monument, a bust of Dreux on a pedestal at North Jefferson Davis Parkway and Canal Street, had a white cloth covering the figure’s head with red X’s over the eyes. Expletives were written on the pedestal in red paint.

The monument has been vandalized before: In January, someone spray-painted “bigot” around the pedestal and left a burning tire at its base. In June 2017, the nose of the statue was chiseled off.

The Take ‘Em Down NOLA crowd will not stop until they have either removed or destroyed every Confederate monument in the city. It doesn’t matter if those monuments are on private or public property.

Then again, Take ‘Em Down NOLA and their allies have no plans to stop at just Confederate monuments. They plan on demolishing all monuments “to white supremacy” in New Orleans. What that really is code for is removing white historical figures from the city.

The battle to save our history in New Orleans is not over. They may have removed Lee Circle and the other big monuments, but there are still other smaller ones that need to be defended.

Interested in more news from Louisiana? We've got you covered! See More Louisiana News
Previous Article VIDEO: Did You See Louisiana’s Department Of Health Admit Medicaid Fraud Might Cost Us As Much As $500 Million?
Next Article LaToya Cantrell’s CFO Pick Makes Us Wonder If New Orleans Is In The Best Of Hands