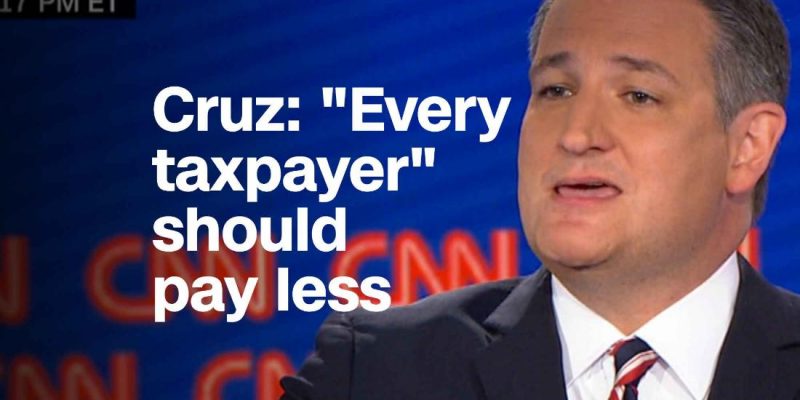 On Tax Day, Senator Ted Cruz, R-Texas, introduced S. 2687, which would make permanent individual tax cuts specified in the Tax Cuts and Jobs Act. (S. 2687 is nearly identical to S.2281, “A bill to amend the Internal Revenue Code of 1986 to make permanent the individual tax rates in effect for taxable years 2018 through 2025,” which Sen. Cruz introduced in January.)

The new law signed by President Trump in December 2017 is expected to provide individuals and families with a tax reduction of approximately $1.17 trillion between 2018 and 2025. Unless these tax cuts are made permanent they will sunset in 2026.

“We’ve been able to deliver on a number of our most important promises to the voters. None is more important than the victory of tax reform,” Sen. Ted Cruz said at a press conference held by Americans for Tax Reform, a nonprofit that opposes all tax increases.

As a result of the tax reform President Donald Trump signed into law, a family of four earning the median income of $73,000, for example, will receive this year a tax cut of more than $2,000. A single parent with one child earning $41,000 per year will receive a $1,304 tax cut, a reduction of 73 percent. The bill Sen. Cruz proposed would ensure that 90 percent of American wage earners would continue to have tax relief after 2025.

The law also doubled the death tax exemption to $11 million. If allowed to sunset it would revert to $5.49 million, resulting in more taxpayers paying higher taxes after a family member dies.

Tax cuts in the new bill also affect businesses like LLCs, partnerships, and S-corporations, which received a 20 percent tax deduction in the new law. This deduction would expire in 2025 if not made permanent.

Sen. Cruz argues that making tax reductions permanent should be a bipartisan issue. He pointed to support expressed by Democratic Senator Bernie Sanders in December 2017 when CNN’s Jake Tapper asked him about tax relief. Sanders replied, “Yes, yes, it’s a wonderful thing. But the problem is, it isn’t permanent.”

Sen. Cruz remarked that when he heard this, he tweeted, “I agree, @BernieSanders — let’s make the middle-class tax cuts permanent. Join me, we’ll co-sponsor legislation (I’ve already got it drafted) that does exactly that, and we’ll get it passed in January!”

Sen. Cruz asked Sanders to join him to make the middle-class tax cuts permanent. He announced publicly, “Join me, we’ll co-sponsor legislation.” Sen. Cruz said that Sanders has not responded to his request.

“President Trump and Congress passed a bold, pro-growth tax reform bill late last year,” Grover Norquist, president of Americans for Tax Reform, wrote in an April 12 letter to the U.S. Secretary of the Treasury, Steven Mnuchin. But, he added, the next step should involve the U.S. Treasury Department “delivering a significant tax cut by using its regulatory authority to add an inflation adjustment to the calculation of capital gains taxes.”

Both S.2687 and S.2281 have been read twice and have been referred to the Senate Committee on Finance.