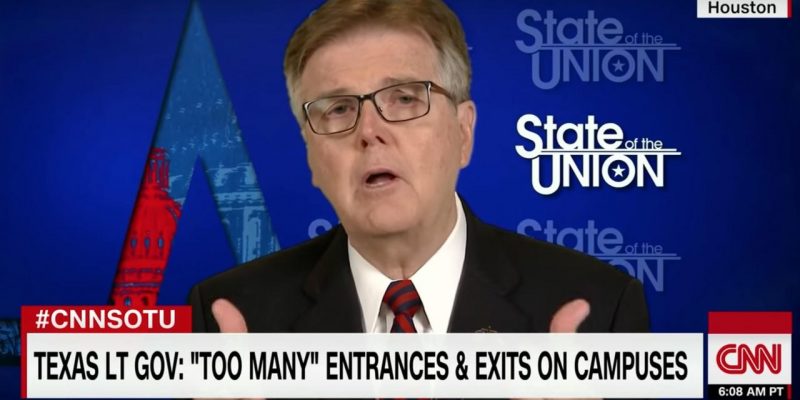 In an interview with CNN, the well-known conservative made the case for arming teachers saying, “We need armed teachers, trained how to handle active shooters.” He continued, “We need to get down to one or two entrances into our schools.”

Patrick visited injured students Friday with Governor Abbott and Senator Cruz where students and parents told them that their teachers needed to be armed. Patrick used the example of a former Marine teacher who could only lock the door in defense of students. He said, “some feel had he been able to carry a gun, he may have been able to stop that shooter.”

In an ABC interview, the Lt. Governor referenced the Second Amendment saying, “Our teachers are part of that well-run militia.” He added, “It’s guns that also stop crimes.”

The former State Senator argued that the plague of school shooters isn’t just about guns, “it’s about us”.

“We have devalued life, whether it’s through abortion, whether it’s the breakup of families, through violent movies, and particularly violent video games which now outsell movies and music,” he said.

Texas maintains a school marshal program which allows teachers to be armed but leaves the final say with the school board and superintendent. Governor Abbott and Senator Cruz have long been advocates of such policies.

Armed Educators (and trusted people who work within a school) love our students and will protect them. Very smart people. Must be firearms adept & have annual training. Should get yearly bonus. Shootings will not happen again – a big & very inexpensive deterrent. Up to States.

Interested in more news from Texas? We've got you covered! See More Texas News
Previous Article Louisiana Law Changes: Abortion, Hazing and Marijuana
Next Article The SCANDAL no one in the media is talking about: Blatant DNC Election Fraud [video]