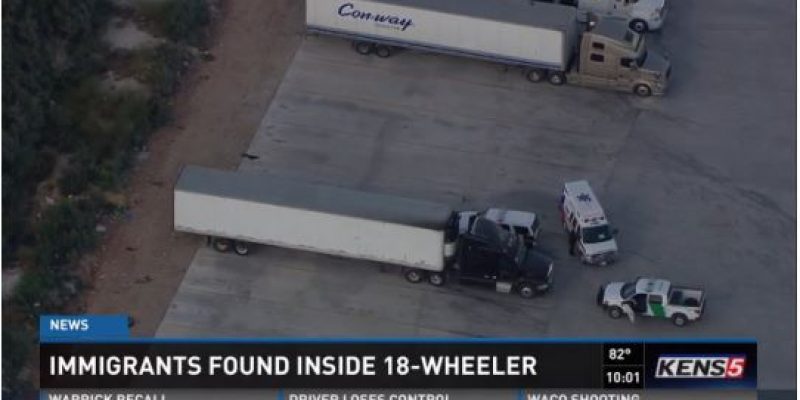 Police found 86 illegals inside of an 18-wheel tractor trailer packed inside behind crates of avocados. They were being driven north into Texas roughly 50 miles from the Mexican border when they were stopped by members of the Texas Department of Public Safety on Expressway 77 near Raymondville, Texas. The 86 people included four unaccompanied children and their ages ranged from 3-years-old to 59.

Once pulled over, some inside tried to punch a hole in the roof to escape, Willacy County Sheriff Larry Spence told the The Monitor newspaper. He also remarked that this stop was one of the largest human trafficking cases he’s witnessed in more than 30 years.

Willacy County EMS Frank Torres confirm over 50 undocumented immigrants found inside of a tractor trailer on Northbound Highway 77 near Raymondville. No report of injuries at the moment. @kgbt pic.twitter.com/wrDoLqtf5m

Police followed the 18-wheeler from the border town of Donna, a few miles north of the Rio Grande, after receiving reports that it might be carrying illegals, Frank Torres, Willacy County EMS manager told the Washington Times. He said the illegals were “packed like sardines” inside the refrigerated trailer.

Many of the illegals were treated for dehydration. Even though the trailer was refrigerated, two adults suffered heat exhaustion and dehydration and were taken to the hospital; one child was reported to be in distress.

The two suspected smugglers were arrested and the case was turned over to Homeland Security. U.S. Customs and Border protection said in a statement that the illegal aliens were from Honduras, Guatemala, El Salvador, Mexico and Nicaragua.

This is yet another reason why the border wall needs to be built and illegals be kept from entering through such dangerous circumstances. What kind of parent sends a three-year-old unaccompanied in a truck like this? These are actions of reckless people who give no thought to putting their own lives let alone a child’s life at risk.