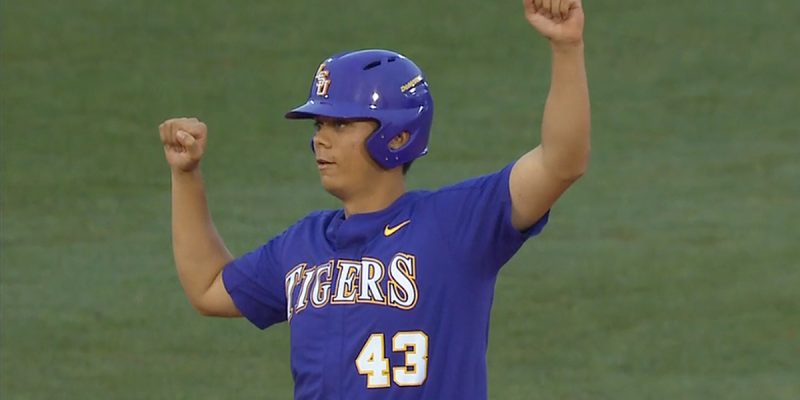 It’s time to be honest here – this has not been a good season for LSU baseball.

The Tigers were only 33-23 in the regular season, and those 23 losses by themselves signify the most in club history since head coach Paul Mainieri’s first LSU team went 29-26-1 in 2007. LSU was also 15-15 in SEC play, which is the worst conference record since the 2011 team finished 13-17. The season has been a cacophony of missed opportunities, disappointing performances and injuries – starting when would-be ace pitcher Eric Walker, who was sensational as a freshman last season, went down with an arm injury in the College World Series last year and skipped the season and continued on through 2018 with the loss of shortstop Josh Smith, pitcher Nick Storz, for a time first baseman Bryce Jordan, catcher Hunter Feduccia, pitcher A.J. Labas and second baseman Brandt Broussard.

It’s been a mess. And for the final month of the season the team has been playing with a noose around its neck. Going into the SEC Tournament in Hoover, Alabama this week LSU wasn’t even a sure thing for a spot in the NCAA Tournament – which is a sizable comedown from the past six years, in which LSU was the only program in Division 1 to land a spot among the national top 8 seeds and therefore have homefield advantage throughout regional play.

The Tigers will be on the road for a regional, but thanks to the events of this week in Hoover they’ll be in one. They’ve played themselves off the bubble with wins over Mississippi State and South Carolina, and they’re still alive for a shot at the conference’s tournament title.

And pitcher Todd Peterson, who got the save in the Mississippi State win, insured that he’d be the hero of the SEC Tournament for the team – and maybe even the tournament’s most valuable player.

It wouldn’t really be LSU baseball if Peterson hadn’t hammered that double off the wall, would it?

And here was Peterson’s post-game interview.

So OK – Peterson was obviously a star athlete in high school, so you’d figure he’d hit when he wasn’t pitching, right?

Ehhhhhh, well…in the SEC Network postgame show, Peterson’s father Hans was asked about it and his response was essentially “Yyyyyeah! Sure!”

Meanwhile, the LSU sports information crew frantically searched the internet for a record of Todd Peterson the High School Hitter of Nukes.

Which led to the post-game press conference, upon which the truth finally surfaced and hilarity erupted…

Which makes his smash off the wall in left all the more delicious. LSU now has a signature moment for the 2018 season, and some actual momentum coming into the postseason.

Not to mention a bonafide hero in Peterson, who opened the season as the Sunday starter and was less-than-inspiring – but is now emerging as a star closer on a team which has had problems with its bullpen all year.

Which is not to say some miracle postseason run is coming. This isn’t an LSU team loaded with the kind of talent it has had for the past six years.

But the win over South Carolina did prove one thing, which is that there is still some magic left in the purple and gold. And that, in what’s been a long and frustrating season, is a hopeful sign for both the present and the future.

Interested in more news from Louisiana? We've got you covered! See More Louisiana News
Previous Article Louisiana National Guard Deploys To Texas-Mexico Border
Next Article UPDATED: It Appears There May Be A Deal On The Louisiana Budget…