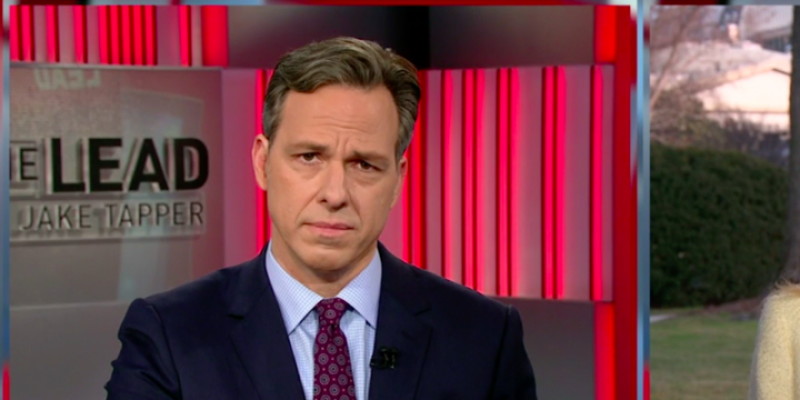 According to an analysis by Brietbart News, CNN’s Jake Tapper has lost nearly one third of his viewers. Comparing total number of viewers and age demo (25-54 year-old) viewers over the same time period Brietbart reported that his viewership has shrunk by 28 and 32 percent, respectively.

What a difference one year makes.

Tapper’s Sunday talk show, “State of the Union,” is also floundering. Take one Sunday in May, for example, Tapper had 798,000 viewers compared to a rerun of Fox News Sunday, which earned 1.061 million.

At MSNBC, Nicole Wallace, a host with no journalism experience, is beating Tapper with an average of 1.245  million total viewers.

CNN isn’t doing so well either. It’s ratings also dropped by 30 percent in one month.

Hmmm. I wonder why.

Breitbart writes, “CNN is as humorless, programmed, and pedantic as a day spent at socialist summer camp.”

This could be one reason. But the real reason might be that people have caught on to the genuinely fake information that they propagate and continue to lie about political issues. The fake Russian dossier is one, for example. But not covering actual news is more problematic– like the ongoing scandal at the FBI connected to Hillary Clinton and Barack Obama.

By incessantly going after Trump, constantly pushing deceptive propaganda, tired moralizing, pushing fake news about Islam and then not being able to deal with criticism when caught stating something completely false, staying silent when his audience booed a rape victim (something he refuses to publicly apologize for), he’s gone over the deep end. But perhaps even worse is his self-promotion of misstating his professional background, and his childish attacks on President Trump and his staffers.

What a pathetic example of someone in the “news” and just another example of why CNN and Jeff Zucker’s machine of lies is crumbling.

The truth always comes out. It only takes time to expose the ongoing lies.