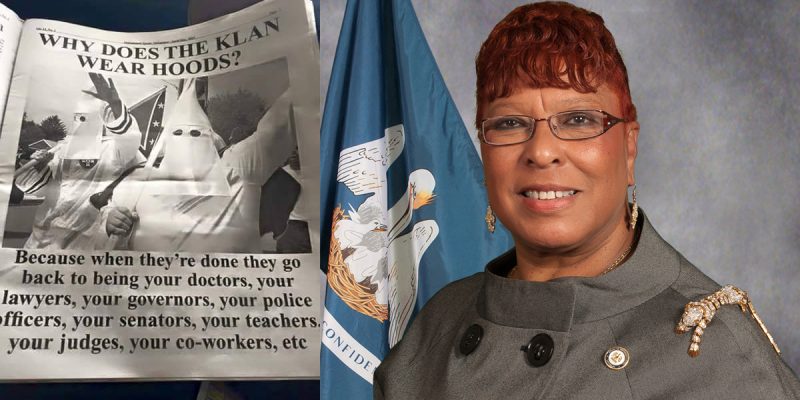 Let’s remember a few things as we analyze this stupid meme.

First, all members of the Ku Klux Klan, when it was even remotely relevant to American society, were Democrats. The Klan was begun as essentially the paramilitary wing of the Democrat Party in the South, as a means of keeping Republicans out of political power. So Smith is obviously talking about Democrats when she brings up the Klan and the people under those hoods.

And no, you don’t get to say “But David Duke.” David Duke’s relevance to Louisiana politics came in the late 1980’s and early 1990’s, when the Louisiana Republican Party had yet to become a fully-fledged political entity. The LAGOP was still in the process of picking off Democrat turncoats in order to find candidates for most races because fully-fledged Republicans couldn’t garner much of a vote statewide on a consistent basis. The 1991 Republican nominee for governor, in the race Duke managed to make a runoff in, was Clyde Holloway. He got five percent. Democrat turncoat incumbent governor Buddy Roemer missed the runoff that year due to one of the worst re-election campaigns in American history; Roemer switched parties to the GOP AFTER Holloway was given the state party’s endorsement. The party never endorsed Duke. And furthermore, Louisiana’s Republican voter registration didn’t hit 20 percent until 2000; in 1991 there were only five Republicans out of 39 in the state senate and just 17 of 105 House members were with the GOP. In other words, the majority of the votes David Duke received when he ran for governor were from Democrats in 1991 – just as the majority of the votes he received when he got pounded by J. Bennett Johnston when he ran for the Senate in 1990 were Democrats as well.

And David Duke switched to Republican from Democrat. When he was the Grand Wizard of the Klan in Louisiana, or whatever stupid title he had in that organization of toothless white trash, he was a Democrat.

So no, David Duke doesn’t disprove that the Klan is a Democrat organization.

And you’ll notice one of the most prominent allegations is that the folks behind those Klan hoods are governors. Well, John Bel Edwards is a governor, and he’s white, and he’s a Democrat – so he would fit the description, no?

Or maybe Smith isn’t talking about Edwards. Maybe she’s just making a wholesale accusation that all the white doctors, lawyers, governors, senators, cops and teachers are secret racists itching to burn crosses and lynch black people. Despite the fact which is pretty obvious to most people, which is that today’s Ku Klux Klan is a bunch of tweakers and ex-cons who can barely hold down minimum wage jobs and live with rusted appliances and dogs on chains in their unmowed front yards.

But you can’t be offended at Smith’s kind of hateful ignorance – dare we call it racist? – or else she’ll castigate you as one of those people behind those hoods. It might be worth asking Smith who exactly she’s talking about, though.

Interested in more national news? We've got you covered! See More National News
Previous Article KAY: A Taxpayer’s Thanks To Sen. Sharon Hewitt
Next Article Another win at the Supreme Court: Christian Pregnancy Centers Can’t Be Forced to Promote Abortion