At least that’s the impression we’ve gotten this week from following a Facebook thread started by U.S. Rep Garret Graves, who represents the Baton Rouge area and has spent a great amount of his time since the region’s devastating flooding in August 2016 on attempting to help flood victims get government assistance.

One of Graves’ chief concerns since the flood has been to address the way the federal government handles duplication of benefits – namely, there’s a rule the feds have on things like flood recovery which bars people from getting government aid twice for the same disaster, and the application of that rule can be both stupid and sloppy. This is something flood victims in the Baton Rouge area have found out to their consternation far too often.

And Graves’ efforts have brought him in conflict with Gov. John Bel Edwards over the flood recovery issue, because – from Graves’ perspective – the governor and his staff have consistently ignored good advice and dragged their feet on necessary items. Worst among these was the failure to timely hire someone to serve as the program manager for the flood recovery effort – this was the contract ultimately awarded to IEM last year, after a failed award blown up because former state senator and convicted bribe-taker Larry Bankston, serving as the executive counsel for the Louisiana State Board of Licensing for contractors ruled that company ineligible because it didn’t have a contractor’s license (despite the fact it had put together a consortium of companies which did have such a license). From Graves’ perspective Edwards’ administration was already several months late in making a hire for a program manager; it only made the problem worse when the contract had to be re-bid only to award it to the same company later.

And given the way flood recovery works, time is of the essence in shoveling aid out of the door. People will do what they have to do in order to get their homes quickly back into working condition – or if that’s not possible, they’ll pick up and find a new home, leaving a ruined and blighted mess for the bank to sort out. If the government can play a positive role in that, fine – if not, they’ll move on. Waiting two years before helping people generally means wasted money and irritated flood victims.

That’s what Edwards is finding out with his Restore Louisiana flood recovery program. The key piece to the program is having flood victims fill out a survey which tells Restore Louisiana what kind of aid they’ll eligible for. But because of the late start, lots of people just took the financial hit and came out of pocket to fix up their property and have no interest in government help.

As for the ones who did bite, well… 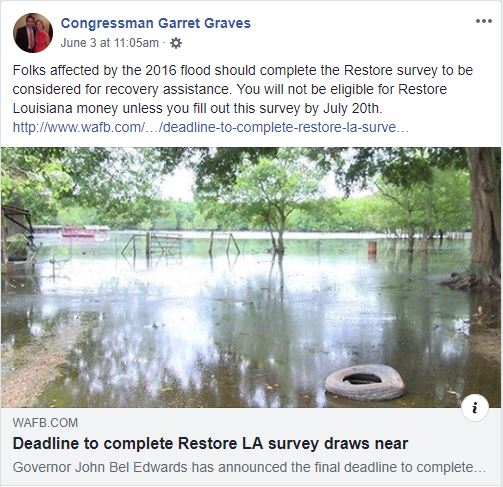 The WAFB story he linked to is here. It contains a discussion of the duplication of benefits issue, and the fact that one of the things lots of flood victims did was to take an SBA loan in order to make repairs. Except an SBA loan – that you have to pay back – constitutes a benefit as far as the feds are concerned, and you run into a duplication-of-benefits issue which bars you from getting any recovery money from Restore Louisiana. Graves is trying to get that changed in Congress; a bill to do so has passed in the House and awaits a vote in the Senate. Edwards has a quote in the WAFB story telling people to fill out the survey anyway…

“I strongly encourage those homeowners impacted by the 2016 floods to take a few moments to complete the survey in order to participate in this program, if they have not already done so. We want to help as many as possible, but we need you to take the first step, especially as the new deadline quickly approaches. We are still awaiting clarification from the federal government on the duplication of benefits issue and should it favor the program, that will mean additional assistance, but we can’t include those who have not completed the initial survey. This is why it’s imperative for those homeowners who have not completed it to do so immediately,” said Edwards. 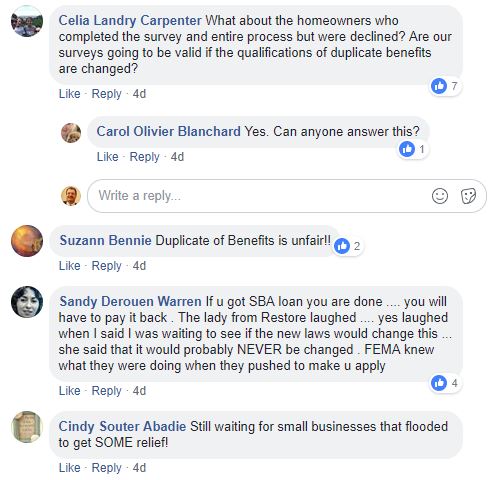 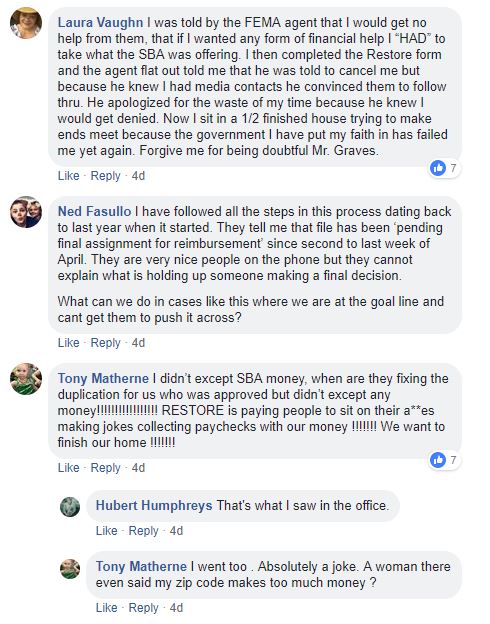 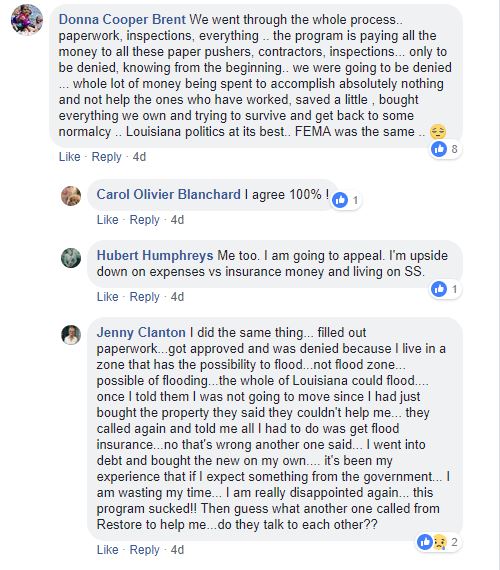 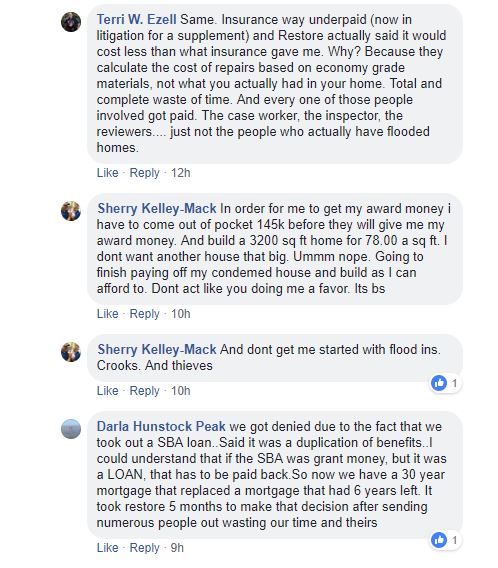 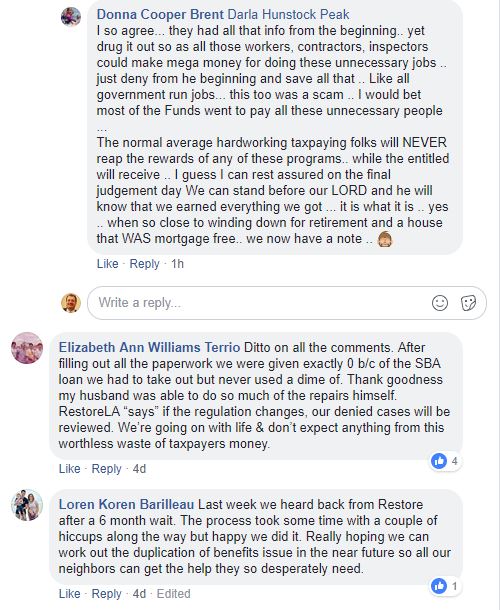 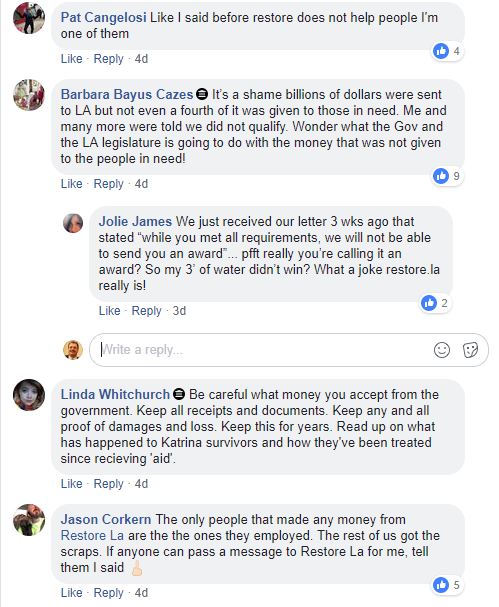 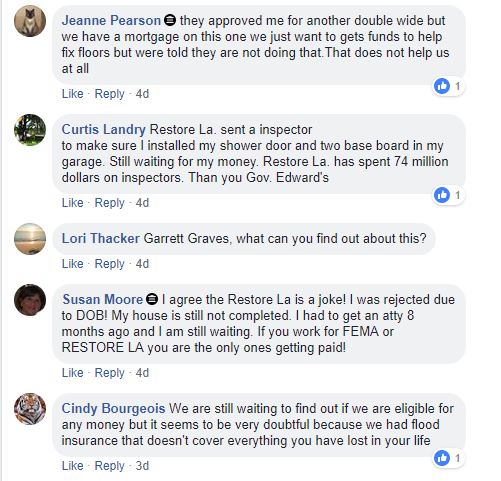 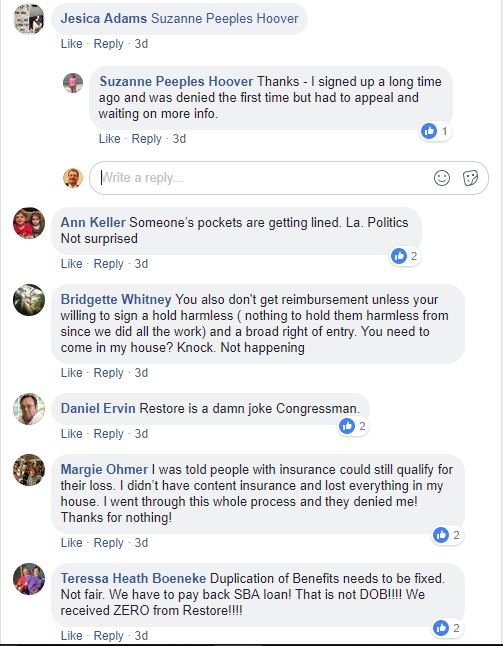 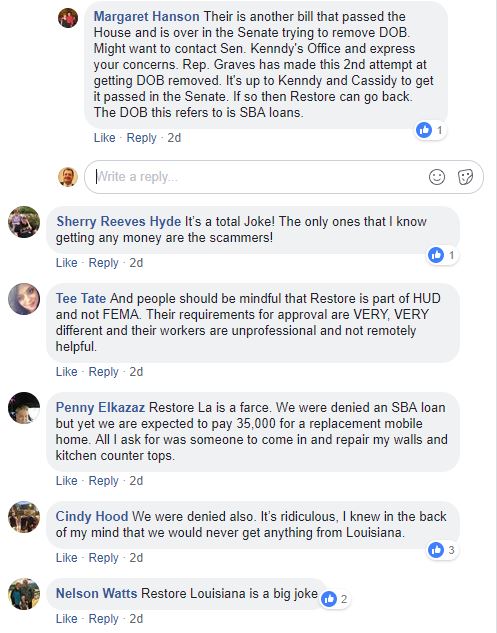 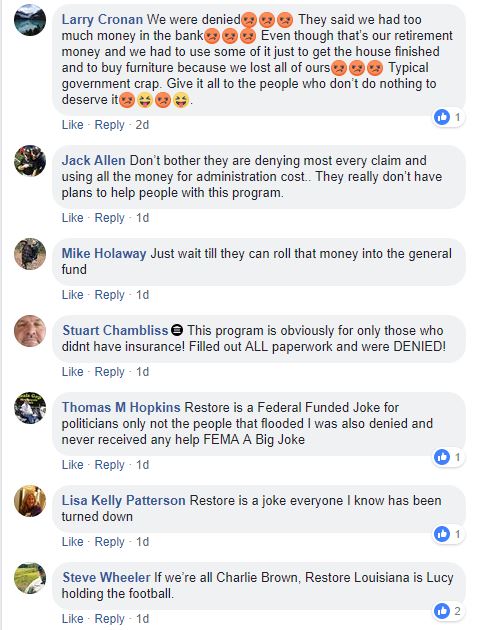 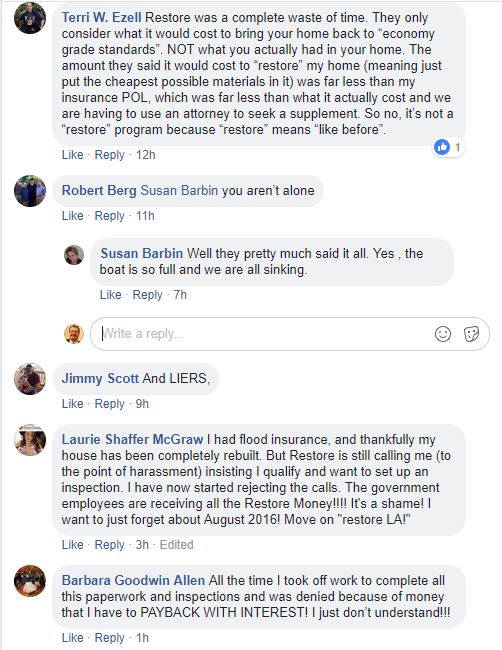 We’ve included every comment in the thread which had anything substantive to say, and as you can see there isn’t a single one which could be considered a positive review.

Sure, lots of these are angry at the federal government. The problem is it’s Edwards’ program which is the gateway to the feds, and it’s Edwards exhorting people to fill out that survey on the promise that it’ll produce positive results for them. Disappoint these people and they will not vote for your re-election; that’s a virtual guarantee.

It’s a mess, and the state’s legacy media has given it relatively short shrift. That has perhaps helped Edwards’ approval rating to date – we can be assured that were Bobby Jindal in charge of such a fiasco he’d never hear the end of it and he’d be publicized as one of the most disliked governors in the nation, etc.

But next year Edwards will be up for re-election, and the efficacy of that flood recovery program is going to be an issue in the campaign. Perhaps public perception might change about Restore Louisiana between now and then, but as of today it’s pretty difficult to see how this is going to be anything other than a golden messaging opportunity for whoever runs against him.

Interested in more news from Louisiana? We've got you covered! See More Louisiana News
Previous Article RAINEY: Louisiana Lost One Of Its Best With Randy Piedrahita’s Passing
Next Article VIDEO: Are Y’all Interested In Watching Gravy Chambers Get Pulled Over And Act Up To The Cops?