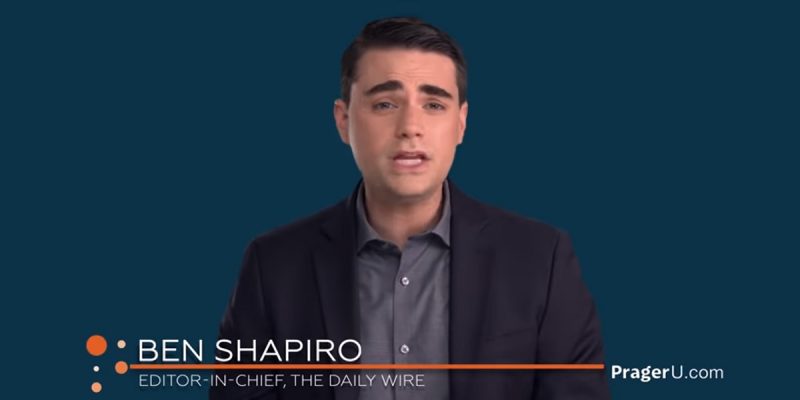 If you’re not up on your leftist orthodoxy circa 2018, this video is offered for the purposes of your education – or re-education, as the case may be. It covers intersectionality, which is the new social-justice craze being spread by the academic Left.

What’s intersectionality? Let’s leave this to Ben Shapiro, who has spent more time speaking on college campuses and fighting the intellectual wars against social justice warriors than perhaps anyone else over the past five years or so…

A few points about the significance of this idiocy. First, this is a way to stitch together a large number of relatively small minority groups. There really are not that many gay people out there, for example – most studies show that’s less than three percent of the population. Transgender people are a far smaller group – that’s less than one tenth of one percent. Muslims are maybe one percent of the population, probably less. Blacks and Hispanics represent between 12 and 14 percent each. Sure, women are a little over 50 percent, but of course they represent far too large and diverse a group of people to corral into a true victim group.

But if you can enforce identity solidarity within these groups by getting the people in them to think of themselves as part of a collective rather than as individuals, and the easiest way to do that is to preach victimhood and offer it to them based not on their personal experiences but on the experiences of the group, then you can mobilize them to do things there would be no rational motivation to do. Getting gay Jewish kids to show up to a pro-Palestinian rally, for example, or getting inner city black kids to protest for an open borders immigration policy that would hurt employment prospects in the black community.

Intersectionality is about manipulation, and it’s about dehumanization. It dehumanizes members of these purported victim’s groups it stitches together, because if you buy into this madness you’re then obligated to participate in its manifestations or else you’re a traitor to your class. And of course it dehumanizes people who aren’t “victims” by discounting their experience and talents as the product of “white privilege” and other such nonsense. We’ve seen throughout history what comes of dehumanization and its resultant manipulation.

But mostly, what this amounts to is a refined sort of communism. To truly understand the social justice warrior crowd, you have to go back 100 years to the early socialist/communist movement, which had swallowed Karl Marx hook, line and sinker – so much so that they believed Marx’s scribblings about the great proletarian revolution’s inevitability that when World War I happened and none of the great prizes of Europe – Great Britain, France, Germany, Italy – fell to the communists, they were crushed.

Even more dispiriting was that poor people in all of those countries rushed to join armies being poured into the meat grinder that was trench warfare.

And because most people had little interest in Marxist economic theory as the basis for living under a tyrannical government, instead of dropping Marxist idiocy they recast it as a cultural movement. That’s where you got the Frankfurt School and cultural Marxism, which exists as a never-ending propagandistic critique of Western society with an eye toward destroying the most successful civilization in the history of mankind.

This intersectionality business, which is the evolution of the cultural Marxist movement on American college campuses, is an attempt to build a majority for tearing down American culture. And your tax and tuition dollars are funding it.

Perhaps that’s something which should stop.