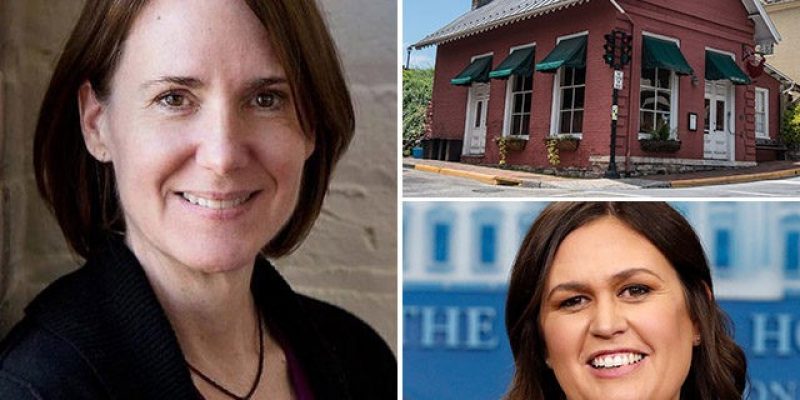 The Virginian Red Hen restaurant that refused to serve White House press secretary Sarah Huckabee Sanders was hit by protesters Tuesday causing police to block off the downtown Lexington street and make one arrest. According to the local congressman, Rep. Bob Goodlatte, the owner is actress Meryl Streep’s cousin, whom he refers to as a liberal New York transplant.

Rep. Goodlatte apologized to Mrs. Sanders on behalf of the town of Lexington:

On behalf of my hometown of Lexington, I want to apologize for the rudeness of one liberal New York transplant (who also happens to be Meryl Streep's cousin). We hope you will come back and enjoy our area's true southern hospitality. https://t.co/CZ5Coc6Uuq

What @PressSec experienced in Lexington last night is very unfortunate and doesn’t reflect accurately upon the kind and caring people of Lexington that I know. There are many great and innovative businesses in #VA06 that I hope you’ll come back to visit. https://t.co/gTEcrhLjYt

After the protesting, the restaurant remained closed. According to a Roanoke Times reporter, a few dozen people were protesting outside of the Red Hen. One man apparently yelled into a megaphone that “nations like America that forget God, they’re gonna end up in hell.”

Scene outside the Red Hen. Street shut down. pic.twitter.com/rRzmivCAqB

Another protester, not with the others, held a U.S. flag. Two others were photographed carrying “Trump: Make America Great Again” flags.

Lexington Police Chief Sam Roman told the Roanoke Times that one man drove by and threw a bucket of chicken manure out the window while shouting “make America great again.” Police arrested him and charged him with disorderly conduct.

“People have the right to exercise free speech, and we’re just here to make sure it doesn’t go beyond that,” Chief Roman told the Times.