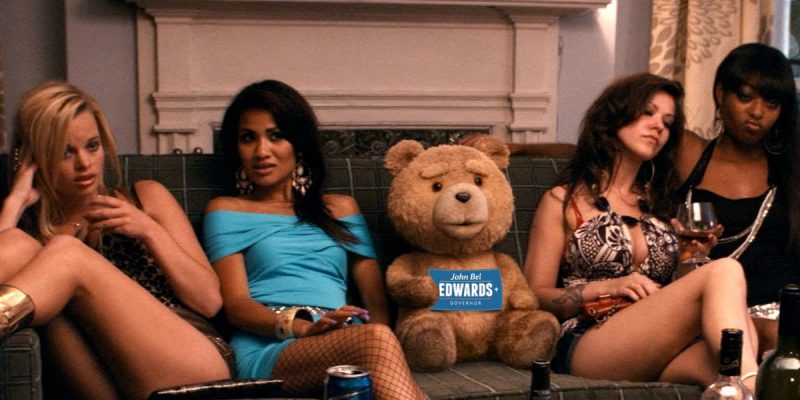 It seems like back in 2015 we had a pretty good consensus that politicians who traffic in whores are unfit to be governor of the state of Louisiana – which was the primary reason David Vitter, who had been a relatively popular U.S. Senator and had won re-election in 2010 by 19 points, was beaten in a landslide by an upstart leftist state representative from nowhere. It had to be the primary reason, because “Hookers!” was pretty much all John Bel Edwards talked about.

Fast forward three years, and while there is no evidence sex-for-hire is on order at the Governor’s Mansion, it seems prostitution is as in vogue as ever at the State Capitol.

It seems that way thanks to a laughable op-ed written by two former Bobby Jindal staffers now singing for their supper in the pages of the Baton Rouge Advocate. We bring you former Jindal Commissioner of Administration Paul Rainwater and Revenue Secretary Tim Barfield, who implore us to support a half-billion dollar tax increase for the good of the people…

Regardless of what you may have heard from some legislators and lobbyists, Louisiana is in the midst of a budget crisis of epic proportions, one which threatens our schools and colleges, our infrastructure, services to the sick and those with disabilities, and food security for struggling families across our state.

A lot of incendiary things have been said about those who recognize that renewing a half-cent sales tax is the only way to keep our state afloat. Supporters of this partial tax renewal have been tagged as tax-and-spend liberals.

We’re here today, having served in the cabinet of former Republican Gov. Bobby Jindal, to applaud the Republicans who have stepped out and are supporting the half-cent sales tax renewal, which is the only way to shore up our budget in this moment. It is a tough choice to make — taxing citizens is never easy — but it is the best solution for our state in this moment.

Neither party has a monopoly on good ideas, or bad ones, for that matter. And we’re proud of the work to streamline government and rein in spending on behalf of the people of our great state. But we’re at a moment in Louisiana’s history where we simply cannot cut our way out of our budget problems.

We won’t bore you with the rest of this bilge, as you’ve no doubt heard it all before. The message here isn’t what’s important – it’s the same crap you’ve heard ad nauseam from Edwards since he’s run up the largest tab of spending of any governor in Louisiana history.

What we will say about this is the most important bit of Rainwater and Barfield’s dire warning comes at the end, in the editor’s note…

Paul Rainwater is a lobbyist with Cornerstone Government Affairs who represents a variety of clients, including the University of Louisiana System and the University Medical Center. He previously served as commissioner of administration and chief of staff for Gov. Bobby Jindal. Tim Barfield is the president of CSRS, a consulting firm that is often involved with government projects. He previously served as revenue secretary, executive counsel and workforce commission secretary in Jindal’s administration.

Got that? This thing starts out dismissing the “lobbyists” who advocate against higher taxes, and then you realize the people writing it are lobbyists on the government teat.

If that isn’t prostitution of the political variety, nothing of the sort exists. 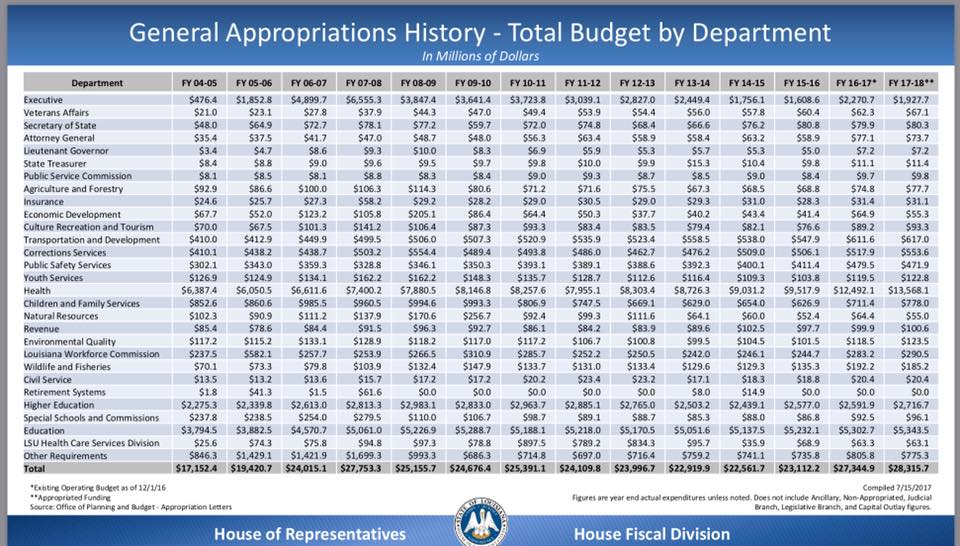 You might need to click on the image to see its full size. But we’ll give you the highlights; namely, that in FY 15-16, the last year of the Jindal administration Rainwater and Barfield served in, Louisiana’s budget was $23.1 billion. Jindal came into office in 2008, with the state flush with Katrina recovery money, and in FY 08-09 Louisiana spent $25.1 billion. Other than in 2010-11, when Jindal had $25.4 billion to spend thanks to the Obama stimulus plan showering federal dollars on states across the country, the Jindal administration whittled away at the size of state government pretty much every year.

And nothing closed. No universities, no prisons. The elderly weren’t turned out of nursing homes, the food stamp program wasn’t disbanded, there was college football every fall.

In this current fiscal year, the state’s budget is $28.3 billion, and we’re being told that for next year $30 billion isn’t enough. Which means Edwards has blown away all of the work Rainwater and Barfield did in attempting to trim Louisiana’s government down to size.

And they’re fine with that, because they can catch a check from their current employers for it.

We don’t begrudge anybody making a living. Rainwater and Barfield are going to do what they’ve got to do. But when it comes to this, demanding that the struggling economy of Louisiana which has shrunk for the past two years struggle even more under the weight of high taxation so that CSRS can keep landing state contracts and Cornerstone’s clients don’t take budget cuts, we’ve got no choice but to call it what it is.

And that is to say we’re awash in hookers at the moment. Isn’t that what the voters were trying to avoid in 2015?