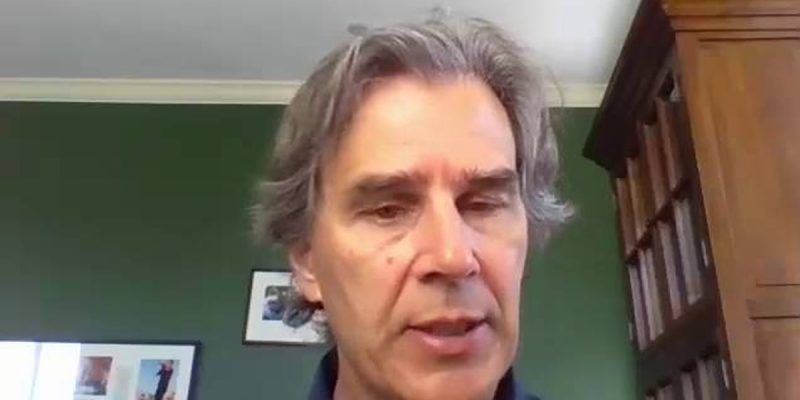 You might have seen a piece over the weekend written by the Advocate’s Tyler Bridges, whose sole purpose for that paper seems to be to enforce the leftist narrative on policy and politics regardless of what genocide of facts must be committed in order to do so, chiding some Democrat members of the legislature over their practice of skipping votes on abortion.

During the past three legislative sessions, seven Democrats missed more than half of the votes on abortion, an issue fraught with political peril for some Democrats in this anti-abortion state.

Two Democrats from New Orleans — state Rep. Neil Abramson and state Rep. Gary Carter Jr. — missed 15 of the 17 votes taken during the 2016, 2017 and 2018 legislative sessions, according to a score cardcompiled by Louisiana Right to Life, the state’s leading  anti-abortion group.

Both men said the press of other legislative business caused them to miss the abortion-related votes.

Benjamin Clapper, the group’s executive director, has a simple explanation for the missed votes.

No Republicans missed at least half of the 17 votes, according to the group’s score card.

If you read the whole thing, the way it reads is as a complaint that Democrats who are pro-choice are cowards for not standing up for their position. And it’s especially a shot at Abramson, whose stances on fiscal issues are far more in line with a Republican philosophy than with that “D” next to his name. Abramson’s district is a good bit more to the left than he is; Donald Trump pulled just 22 percent of the vote there and John Kennedy got just 25 percent in the 2016 elections.

And Bridges has developed a pattern of dumping on Abramson over the last few years.

Abramson chairs the Ways and Means Committee, which meant that in 2017 he was especially busy handling tax legislation. (Tax bills in 2016 and 2018 were handled in special sessions where there were no votes on abortion.) In 2018, Abramson has begun serving as the floor leader for New Orleans Mayor LaToya Cantrell, who took office four weeks ago.

Abramson also missed 13 of 15 abortion votes scored by Louisiana Right to Life during the previous legislative term, from 2012 to 2015, when he chaired the Civil Law and Procedure Committee.

In a 2016 interview, Abramson declined to state his views on abortion. “That’s a broad question,” he said when asked whether he supported women having the right to an abortion.

“I’m not going to get into the details of all of this,” he said when asked whether he opposed abortion save in the cases of limited exceptions, a common Republican position.

For this article, Abramson declined to answer questions about his position on abortion and his voting record on the issue, saying The Advocate has not treated him fairly in the past and has inaccurately characterized his views.

The story also included some form of reaction from the other legislators it mentioned, but went out of its way to give Abramson a pat-down.

But here’s what’s interesting about this. Abramson went on Facebook before the story was even published and said…

I have learned that I am likely to be attacked again tomorrow in the newspaper by a so-called reporter who has consistently misrepresented and misquoted me in the past. As a result of his past actions, I quit interviewing with him and instead provide him only with written statements. He now refuses to include my statement or to tell the public why I will not interview with him specifically — because it apparently doesn’t fit his story or allow the public to know the truth on that — see attached

Attached was this, which Abramson said was Bridges’ message to him…

So Abramson then posted the statement that he gave Bridges…

Since I was elected to office 11 years ago, I have been at the top of the Louisiana House of Representatives in passing bills that have become law. I have advocated for a constitutional convention to address our state’s fiscal woes, and I have been extremely active and successful in other legislative matters, which make my district and our city a better place. In addition, in the last three years, I have been the chair of Ways and Means which has been the most active committee in the legislature, and my duties keep me very busy dealing with the on-going budget issues, capital outlay and planning for the numerous special sessions, whether we are in a fiscal session or not. I was also designated by the new Mayor as the city’s legislative leader which added to my work-load for this year. All of this requires numerous meetings and other activities that frequently take me outside of the House chamber. Because House rules dictate that each legislator be physically present to vote on his/her machine, I am recorded as absent for those votes, regardless of what the subject matter is. I have chosen as a public servant to be extremely active in passing constructive legislation and in working to make our community a better place. That effort requires some sacrifice in terms of being in my chair constantly at all times, and thus being highlighted with a simple recitation of a general voting statistic does not reflect the real impact of my service. My service is more accurately reflected in my legislative successes, which draw upon my realms of particular knowledge and expertise to make a difference for my constituents.

Contrary to your heavily loaded implication, I do not intentionally miss votes relative to any subject matter or in general.

But here’s something else we found interesting – which is the feedback Abramson received to his first Facebook post on the subject which didn’t mention Bridges by name. His colleagues on the Republican side knew exactly who he was talking about and weren’t shy about it at all… 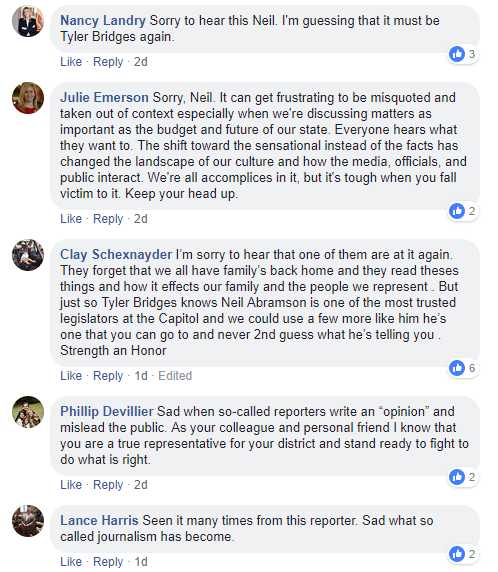 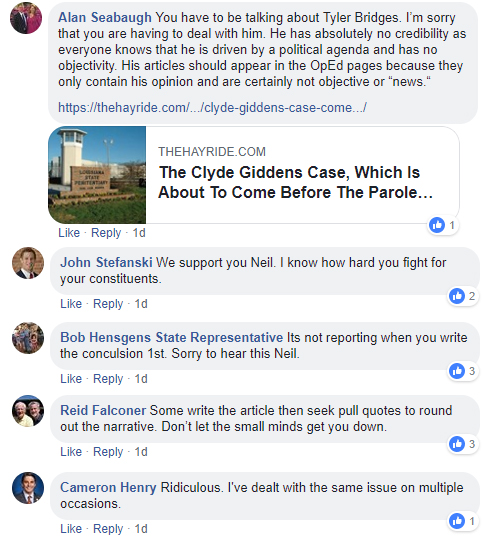 The Hayride link Seabaugh quoted is here, and it covers one of the more amazing journalistic blunders we’ve ever seen – in which Bridges took the word of a deranged murderer who lied about why he was in prison. Clyde Giddens told Bridges he’d spent more than 50 years in prison for killing a man in a bar fight when what he actually did was to murder a woman, cut her body to pieces, burn her house down and feed parts of her to her dogs. Bridges printed Giddens’ lie in a syndicated Washington Post piece he wrote in order to push a criminal justice reform agenda then winding its way through Louisiana’s legislature, but when Giddens came up for parole earlier this year as a result of the reform package the truth about his record came out. And Giddens did not.

To Bridges’ embarrassment, obviously. His Post piece was edited to remove all mention of Giddens, whose sad Fake News story was the lede of the piece. And yet it was Bridges writing the story at the Advocate about Giddens’ rejection by the parole board.

One has to wonder how much longer the Advocate will carry Bridges on its staff. He was hired in 2015 for what appeared to be the purpose of nonstop attacks on then-gubernatorial candidate David Vitter, and did much to further the dominant narrative that the campaign was about Vitter’s 15-year old dalliances with hookers and not policy, and that narrative was effective in turning Vitter from unquestioned favorite to runoff loser and giving Louisiana its currently failed governor.

The Republicans in the state legislature have largely cut Bridges off from any interviews, which is why he’s writing stories about Democrats in the legislature refusing to cast pro-abortion votes on bills the outcome of which is predetermined. And you just saw above how little regard they have for him that they’d go on record at Abramson’s Facebook page to trash him as a poor journalist.

And yet he’s still there, plunking away for 2,000 words on the Advocate’s front page every Sunday. One wonders who thinks this is a good idea for the paper’s credibility and circulation.