We know this because it was tried last night and it didn’t pass. The House only gave 60 of a needed 70 votes to a sales tax hike bill at a 4.5 percent rate.

The bill in question was HB 10, by Rep. Paula Davis, which as written would have raised the state sales tax from 4 cents, as it is scheduled to be on July 1 when the 2016 5 cent rate expires, to 4.4 cents. An amendment added to the bill by Rep. Steve Carter converted that rate to 4.5 cents. Carter got 69 votes for his amendment.

But then when it came time to vote on the 4.5 cent rate as HB 4 was amended to reflect, it fell 10 votes short. 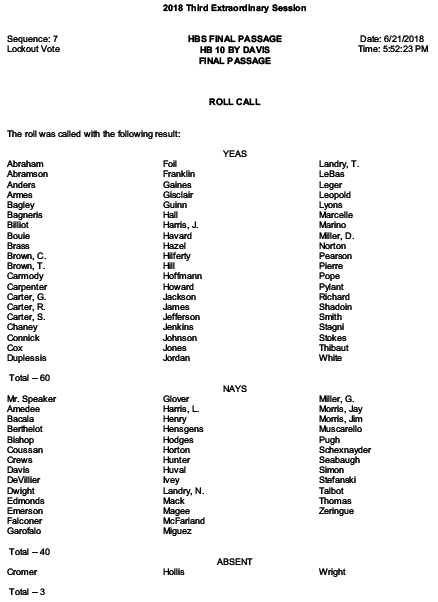 Only two Democrats – Marcus Hunter and Cedric Glover – voted no. The bill was killed through a strong rejection by House conservatives.

This morning when the House reconvenes, Davis’ bill will likely come back up at 4.4 cents. It’s not known whether it will pass.

You would think that at 4.4 cents the bill would attract the support of the Legislative Black Caucus, which has of late been demanding a half-cent increase in the state sales tax. This is an interesting change, as earlier this year the Black Caucus was busily rejecting sales tax increases, period, on account of their perceived regressive nature. Now they’re frustrated because Republicans won’t go for a half-cent increase.

The difference between the fiscal note of Davis’ bill at $424 million and the $507 million a half-cent sales tax increase would generate is just $83 million. Nobody at the Capitol thinks a $29 billion-and-change state government can’t find $83 million in savings.

Speculation has it the reason the Black Caucus is holding out is they’ve decided to carry water for Gov. John Bel Edwards, who is desperate to run a big surplus in the 2018-19 fiscal year. Edwards wants to be in the black by several hundred million dollars for a couple of reasons – first, it will fuel his new narrative that Louisiana is booming under his management, which is only sellable based on state revenues because the other metrics of economic performance will for the foreseeable future show the state lagging behind its southern neighbors.

But second, Edwards needs a surplus because the teacher unions, to whom he’s indebted for his political life, are demanding a pay raise and talking about going on strike to get one. He can’t give them one in an election year by demanding another tax increase. He can only do it in the context of the state having lots of extra money laying around that he can use to pay them off without a further assault on taxpayer wallets.

Forget about the fact that teachers are employees of local school districts which have the power to tax, and for the state to be giving teacher pay raises is a bad idea because it worsens the problem of local governments being overdependent on an inefficient and incompetent state government. This is what the unions who bankrolled Edwards’ campaign when it appeared hopeless are demanding, and that makes them a priority over things like roads or the state’s private economy.

The Black Caucus is said to be demanding that one or more of the Democrat-authored bills raising the sales tax rate to 4.5 percent be discharged from the House Ways & Means Committee, which killed them all earlier this week. That isn’t going to happen. What’s more likely is that Davis’ bill at 4.4 cents will end up passing out of the House and then get “jacked up” in the Senate’s Revenue & Fiscal Affairs Committee to the 4.5 cent rate, then sent back over to the House for another run at forcing it through. There is little reason to think that’s going to work, but it’s likely the only way Edwards can get his half-cent.

Thanks to that Supreme Court decision on internet sales taxes, it’s entirely likely that Louisiana’s government will be in the black regardless of the tax increase bill passing or not passing today, and that’s why adjourning this session and going home is the most responsible thing the legislature can do. But we’ll see what happens when today’s activity begins.