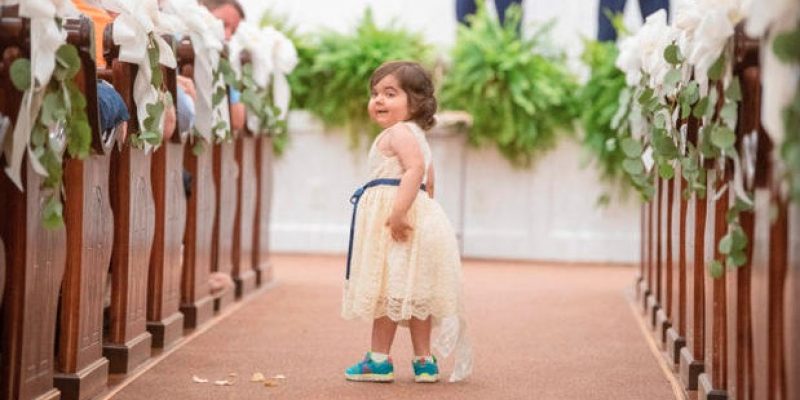 In 2015, Hayden Hatfield, now Hayden Ryals, 26, was in a state of flux, changing her major at Auburn University. She registered as a bone-marrow donor at a time when she said she was “trying to decide what she wanted to do with her life and who she wanted to be.”

About one year later she got a call telling her that she was a match to an anonymous 1-year-old child many miles away.

“I had started to question whether I had a purpose here,” she told the Washington Post. “That phone call gave me a purpose.”

The recipient was one-year old Skye Savren-McCormick, who was given a 10 percent chance of living. Skye was diagnosed with a rare form of cancer called juvenile myelomonacytic leukemia. She had blood and platelet transfusions almost daily, and was in the hospital for 10 months due treatment complications.

She needed a bone marrow transplant to live. And she got it from Hayden through Be the Match, a nonprofit organization that facilitate bone marrow donations. Even though the donation was anonymous, the two were linked after the surgery in 2016.

Now 3-years-old, Skye and Hayden aren’t anonymous to each other. Skye was Hayden’s flower girl in her wedding, at Shiloh Baptist Church in Hartford, Ala.

“She’s a fighter, and she is full of spunk, and she just has the best attitude, and I think everybody could learn something from this 3-year old,” Hayden said.

Prior to the wedding Hayden reached out to Skye’s family, and later, invited to serve as a flower girl in her wedding. Their relationship began through email, then a phone call and texting.

Skye was on oxygen at the time, and it didn’t seem like she’d able to go. But once she was off oxygen, her doctors gave her the go ahead.

Skye Hayden met for the first time at the wedding rehearsal.

“We were in the front, looking around, and she [Ryals] came in and immediately came over to Skye and dropped to her knees,” Skye’s mother told Fox News. “Skye gave her a big hug. The whole night they were sitting together. It was so sweet. It was like they were in love.”

Sky’s family is hoping this story will help encourage others to become bone marrow donors, and explained that it’s very easy to get on the donation registry.

“Anyone could be somebody who saves a life,” Savren-McCormick said. “You don’t have to be a superhero.”

Ryals said she’ll feel a link to Skye for the rest of her life.

“She’s everything to me,” she said. “And this whole journey, I’ve never once seen it as me helping her, because I was honored to do it, and it was a privilege for me to get to do it.”