…and we’re naturally seeing a touchdown dance from Gov. John Bel Edwards seeking to convert that good economic news to political advantage. The question is whether Edwards is entitled to the credit he’s asking for.

But first, the facts…

Louisiana’s gross domestic product grew by 2.3% in the first quarter of 2018, marking the state’s second straight quarter of growth and signaling a potential economic turnaround after a two-year slump.

The state’s first quarter growth eclipsed the national rate of 2%, ranking Louisiana No. 14 among states, according to the U.S. Bureau of Economic Analysis in a report released today. Louisiana previously posted a 2.2% GDP increase in the fourth quarter of 2017, slightly behind the U.S. average of 2.7%.

Any increase is a positive sign for Louisiana, which posted the slowest GDP growth rate in the country last year. The state saw an annual GDP decline of 0.2% in 2017, following a 0.4% decrease the year prior, according to the BEA.

The percent change in GDP—which is the value of all goods and services produced in a defined area—in the first quarter of 2018 ranged from an uptick of 3.6% in Washington to a drop of 0.6% in North Dakota.

Local economist Loren Scott points to two reasons for the recent GDP growth in Louisiana: First, he says, the oil and gas bust is no longer dragging down the economy as it has in recent years. And second, the state is beginning to see dividends from the burgeoning petrochemical industry.

“With the chemical boom going on, plants are now starting to produce,” Scott says. “My anticipation is that GDP will continue to grow. This is good news.”

Gov. John Bel Edwards in a statement said the GDP report is “just one more positive indicator that we are headed in the right direction.” The news follows a July 2 report that Moody’s Investors Service revised the state’s rating outlook from negative to stable—after lawmakers and Gov. John Bel Edwards approved a renewal of 0.45-cent of an expiring one-cent sales tax to offset the impending state budget shortfall.

While listing the state’s recent economic accomplishments, the governor claims to have “lowered taxes on the people of our state” in his statement. Spokesman Richard Carbo says Edwards is referring to the sales tax rate dropping to 4.45% from 5%. But it was Edwards who proposed and state lawmakers who approved upping sales taxes to 5% from 4% in 2016 to avoid the fiscal cliff, meaning the rate remains higher than it was before Edwards took office.

Far be it for us to disparage good economic news. We like private sector success stories, and a 2.3 percent GDP growth can’t happen without them. Last week there was one such story we wanted to highlight and didn’t get the chance to – and here is that chance…

Thanks to tax reform, Complex Chemicals of Tallulah, Louisiana, is hiring more workers, raising wages, and making critical new investments that will help grow their business.

Travis Melton, Complex Chemicals’ Vice President of Sales and Marketing, said that his company’s first order of business after tax reform passed was to give an immediate raise to every single one of their 120 employees. It’s the first time in several years that the company was able to give such substantial, across-the-board pay increases.

Melton also explained that tax reform is helping Complex Chemicals reinvest in its business and accelerate its expansion plans.

“We’ve had an expansion in the works for two years,” Melton said. “Because the corporate tax rates have been reduced, it’s easier for us to move forward with this expansion and another one we have around the corner. Tax reform helps move these investments.”

One of the biggest additions is the installation of a new distillation column, which Melton says will help increase production capabilities and leave the door open for future expansion. Right now, Complex Chemicals’ facilities are operating at maximum capacity.

Melton is optimistic about the future, largely as a result of tax reform.

“For the first time in 20 to 25 years, you have some major players in the U.S. natural gas industry announcing new facilities in the United States,” he said, referring to Complex Chemicals’ suppliers. “They decided to do their expansion here because the tax bill makes it worth it. That means more readily-available byproduct, which we purchase. And more byproduct allows us to increase the amount of product we sell.”

“Tax reform is having a major impact,” Melton added—not just for Complex Chemicals, but for their suppliers and their industry as a whole. “It’s like throwing a rock in the middle of the pond—the ripples hit all sides of the pond.”

So in other words that’s a function of national economic trends brought on by national policy changes.

It should be noted that Texas’ GDP figure for the first quarter was 2.9 percent growth and Florida’s was 2.5 percent. So once again Louisiana is lagging behind our two major Southern competitors. But it’s also fair to note that other states Louisiana competes with fared very poorly by comparison…

As an aside, you would have thought West Virginia might have seen a decent number based on the supposed resurgence in the coal industry, but that didn’t really show up in the first quarter. One thing which could well be driving that lackluster performance is outmigration. Here’s a recent map of those trends… 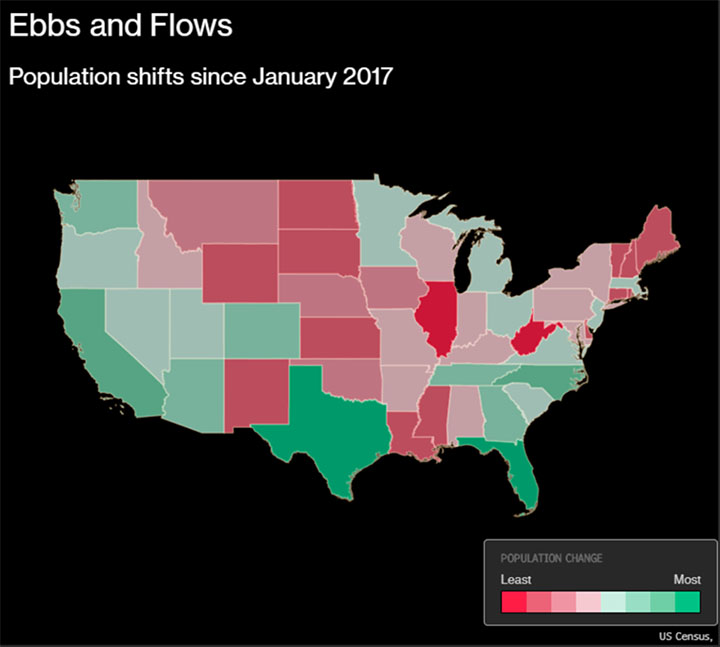 But there is a good jobs number for the state…

Data released today by the Bureau of Labor and Statistics (BLS) shows that the number of seasonally adjusted employed individuals increased by 36,732 to 2,036,316 from June 2017. This is the highest level of employment for the month of June in series history. Over that same time period, the number of seasonally adjusted unemployed individuals decreased by 7,610 to 101,377.

“Louisiana’s economy continues to move in a positive direction, as proven by the consistent over the year improvement these past few months,” said Louisiana Workforce Commission Secretary Ava Dejoie. “We will continue to ensure that every Louisiana resident in search of work, has access to our agency resources and an equal opportunity at a family-sustaining career.”

It should be said that the labor force was higher in June 2015 than it is now, which would indicate that while the state’s economy might be on the mend it’s not better than it was before the current recession started. And given that the construction industry only gained 200 jobs in June, despite being up 3,500 for the year, the concern for both the jobs figure and the GDP figure is that what’s happening is a spike in construction activity based on a bunch of major industrial-expansion deals which were cut years ago and these are benefits of a tail end of expansion which could well begin to dry up soon – and considering that even despite some of those projects happening in 2016 and 2017 Louisiana still contracted in GDP in both those years.

The jobs number in Baton Rouge was a terrific one. Baton Rouge is up 7,300 jobs from June 2017 to June 2018 and an astonishing 3,000 from May of this year. But after that? Lake Charles, which has been the leading economy in the state recently, actually lost 100 jobs from May while still being up 2,500 from a year ago. And New Orleans, which for the year is up 3,400 jobs, was pummeled in June – with 3,000 jobs lost since May of this year. The rest of the state is stagnant.

That’s an indication that Louisiana’s economy is being driven almost completely by the petrochemical industry, mostly in Baton Rouge and Lake Charles, and particularly construction jobs as that industry expands. But we have good reason to believe that expansion is going to be slowing down soon. Here’s a bit of news from the purported Wanhua plant expansion somewhere in Louisiana…

During A July 2018 Hearing Of The House Permanent Select Committee On Intelligence, Rep. Pete King Raised Concerns About The Predatory Investment Practices Of Chinese State-Owned Enterprises, Including A Chemical Company Planning To Build A Facility In Louisiana.

REP. PETER KING: “Thank you, Mr. Chairman. I want to thank you and the witnesses for this hearing. To me this is essentially starting to shine a light on how China is using its unfair investment predatory practices to steal American ideas and innovation and undermine 75 years of an American led international order. I believe though one issue that deserves increased attention is greenfield investment in the United States by Chinese state-owned companies. Which, of course refers to the construction of a manufacturing facility from the ground up. We’re talking about companies that are an extension of the Chinese government and Communist Party. To me, there are significant concerns that Chinese state-owned or financed companies are using greenfield to skirt investment review processes and gain full access to U.S. markets, undercutting U.S. companies and U.S. workers in our backyard. I know there’s an example recently of a Chinese state-owned enterprise which announced it was going to have a $1 billion investment in Louisiana to build a chemical manufacturing facility with promises of new jobs. Typically this company has total financial backing of the Chinese government and use government subsidies. And yet two weeks ago, they said they were reconsidering their investment in Louisiana because of increased costs due to tariffs. They also admitted publicly they were planning to manufacture the chemical facility in China with cheap Chinese labor and cheap Chinese steel and ship it to Louisiana for final assembly. I guess to me this use of cheap Chinese steel and labor is bad for our economy and bad for our workers, especially steel workers in blue collar jobs who are being harmed by unfair Chinese trade practices the last three decades. We know China’s been doing this and bringing their predatory investment practices to our shores. I guess I would like, starting with Mr. Pillsbury, to ask, do you see a distinction between Chinese greenfield investment and investment from other countries? And do you believe the U.S. government should be more stringent on greenfield investment by Chinese SOEs?”

Wanhua was supposed to drop $1.12 billion on a chemical plant here in the state, and last April the Edwards administration put out a glowing press release over those plans. But so far, as best we can tell there isn’t even a site selected for it and the 170 jobs it’s supposed to create are suspect, to say the least.

Again – we’re not going to look a gift horse in the mouth, and after two years of a shrinking state economy we’ll happily take 2.3 percent growth in Q1 2018.

But before Edwards runs across the state dancing his happy dance about how this somehow vindicates his economic record, we’d like to hear him explain three things. First, how this is evidence that Louisiana is actually competitive economically with our neighbors, and particularly Texas and Florida who have been robbing the state blind of jobs and capital in the past several years. Second, how these current numbers are not reflective of a stabilization, if not a rebound, in the state’s oil and gas industry after having lost practically all of its momentum since 2015. And third, how any of it can be said to be sustainable given how much of the current growth appears to be based in the two markets in the state where previously-agreed-upon capital expansions at petrochem plants are happening – and once that construction is finished and the pipeline is empty there doesn’t appear to be much else coming.

Interested in more news from Louisiana? We've got you covered! See More Louisiana News
Previous Article It’s Fair To Say That Jeff Landry Has Fully Called JBE Out On The Death Penalty
Next Article There’s A Simple Solution To This Question About The Death Penalty In Louisiana