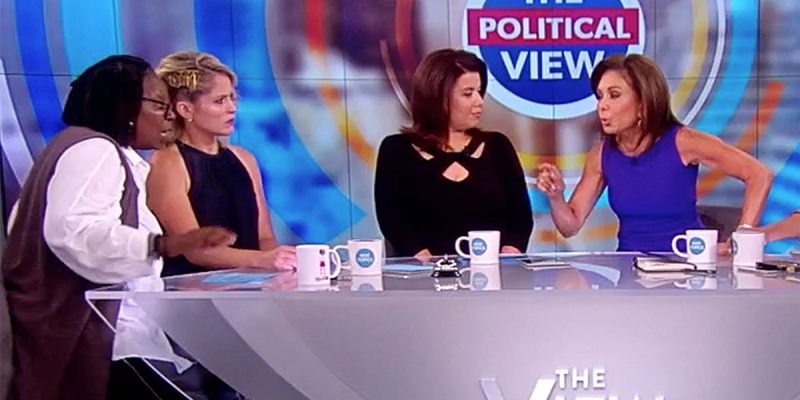 Several weeks ago, ABC made a major public spectacle of firing Roseanne Barr for posting an offensive tweet about former Obama White House Senior Advisor Valerie Jarrett. Within hours of the tweet, Barr was removed from her successful show. Of course, on the program, Barr portrayed a Trump-supporting middle class woman spouting traditional American values. Her show found a huge viewing audience because it was not the usual mix of a leftist agenda with politically correct dialogue. Even though she apologized, ABC had no qualms about removing Barr, and investigating the possibility of continuing the show without Roseanne.

The network did not show the same sense of outrage on Thursday when Whoopi Goldberg, the co-host of their daily talk program The View, verbally abused Fox News TV host Judge Jeanine Pirro both during and after the show.

The Judge was invited on the show to promote her new book, but it soon degenerated into a shouting match with Goldberg, who became upset when Pirro accused her of having “Trump Derangement Syndrome.” Of course, the Judge’s portrayal of Goldberg was completely accurate. On a regular basis, Goldberg and her co-hosts excoriate President Trump on a variety of issues. There is no ideological balance on The View, only left-wing hate.

Instead of admitting her bias, Goldberg attacked the President, claiming “I have never seen anybody whip up such hate” as Donald Trump. In response, Pirro defended the President and noted “You know what’s horrible? When people who shouldn’t be here end up murdering the children of American citizens!” This was too much for Goldberg, who fired back, “What is horrible is when the president of the United States whips up people to beat the hell out of people … Say goodbye. I’m done!”

With that final comment, Goldberg pushed away from the table and the interview was cut short. Sadly, for Judge Pirro, the abuse was not over. After she left the set and attempted to exit the building, Goldberg started yelling at the Judge again, “literally spitting” at her. She fumed, “F**k you, Get the F**k out of this building.”

This type of rude treatment of a Trump supporter is becoming all too commonplace throughout the country. Americans have witnessed Trump supporters being harassed at restaurants, movie theaters and even denied transportation by Uber drivers.

In the past, liberals used to claim they believed in the First Amendment and free speech. Their symbol used to be the peace sign, but, today, it has become the middle finger. They do not want to debate conservatives, they want to prevent conservatives from speaking. As proof, just visit any college campus today.

To treat a respected guest and fellow television host like this is totally unacceptable. Clearly, ABC should have immediately fired Goldberg for her abusive conduct.  Even Goldberg realized that she acted inappropriately. She apologized to the audience in the next segment, “You saw me do something I very rarely do. I very rarely lose my cool and I’m not proud of it. I don’t like it. But I also don’t like being accused of being hysterical because that is one of the things I try not to be on this show.”

Unfortunately, ABC, like every other broadcast network and most cable news outlets, is not fair and balanced. Instead, it is controlled by liberals who advance that ideology in all of their programming. This is the network that fired Roseanne and cancelled Last Man Standing, another show espousing conservative values, even though it was one of the highest rated programs on the network.

Pirro accepted the invitation to appear on the program knowing that she was outnumbered and would be facing tough questions. Sadly, it went much further, into the area of abusive treatment. Pirro admitted the hosts were “gunning for me.” For the Judge, the whole experience was “stunning,” acknowledging she was “shut down in my attempt to answer questions in a place where I was invited on.”

To learn more about the Judge’s experience, listen to my radio interview with her on Friday’s Ringside Politics show on WGSO 990-AM and www.Wgso.com. Here is a link to the podcast.  http://wgso.com/podcast/ringside-politics-july-20-2018/