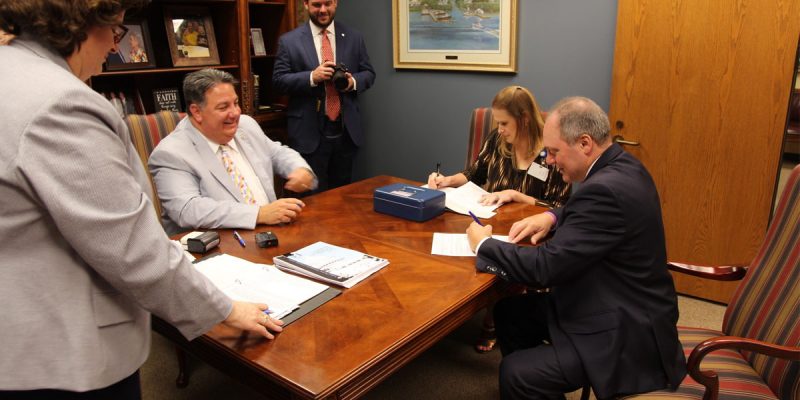 Were there any surprises today, the final day of qualifying for this fall’s elections in Louisiana? Actually, yes – there were.

What we expected, based on all the political buzz around Louisiana and based on what our sources were hearing, was that Louisiana’s 5th District congressman Ralph Abraham was expected to be unopposed for re-election this fall. The grapevine had it that Gov. John Bel Edwards, against whom Abraham is expected to run in the 2019 elections, wanted to deny Abraham a re-election fight which would have given him an opportunity to use federal campaign dollars to run TV ads in the state’s two largest media markets of New Orleans and Baton Rouge. The 5th District is mostly a Monroe-Alexandria district, but it has fingers extending as far as St. Francisville in the environs of Baton Rouge and Bogalusa on the outside edges of the New Orleans metro area.

With a re-election campaign to run, Abraham would be able to tap into those TV markets with ads based on biographical information so as to boost his name recognition for 2019 in the state’s population centers. That’s something he’ll have to do, as South Louisiana has become difficult plowing for candidates north of Alexandria in statewide elections and overcoming that obstacle is Abraham’s chief task if he wants to become a viable gubernatorial candidate.

So it was thought Edwards would keep Democrats out of a race against Abraham and deny him that opportunity for familiarity in the state’s population centers. But without an opponent for re-election Abraham would be able to simply declare early, even as soon as next week, for the 2019 gubernatorial race and begin raising money and traveling the state.

Perhaps that latter possibility motivated the governor, or perhaps somebody just didn’t get the message. Because Friday morning one Jessee Carlton Fleenor of the tiny rural hamlet of Loranger in Tangipahoa Parish, just east of Edwards’ hometown of Amite, jumped in to the LA-05 race. Fleenor, a farmer who said he was a registered Republican who recently switched to the Democrats, is an LSU political science graduate with a bit of a rhetorical flair.

Jessee Carlton Fleenor, D-Loranger, said he entered the race against Abraham because he didn’t think any congressman should be unopposed.

Fleenor, who said he is a vegetable farmer who delivers produce, fresh eggs and homemade jellies to his customers, also had sharp criticism for Abraham.

He called Abraham, who is both a veterinarian and human doctor, “an overpaid horse doctor” whose stance on repealing and replacing the Affordable Care Act and advocating for work requirements for food stamps “is a war on poor people.”

“I want to offer people another option and see if we can shake things up,” he said.

The “overpaid horse doctor” bit is a little more unkind than one would expect, as is Fleenor’s other statement that somehow Abraham violated his hippocratic oath by opposing Obamacare. He also called Abraham “corruptible” and “Wreckin’ Ralph.” And the statement that “A doctor who doesn’t believe in Medicaid is no doctor at all” sounds fishy coming from someone who said he was a Republican until five minutes ago.

The talking points he offered up in his qualifying speech at the Secretary of State’s office sounded very much like they were written by a professional speechwriter even if Fleenor didn’t exactly give off a polished look while giving them.

Fleenor wasn’t actually the only challenger to Abraham qualifying Friday. Billy Burkett, a seafood distributor and FEMA contractor from Pride, north of Baton Rouge, qualified under the “No Party” banner. Here was his qualifying speech…

Upon leaving the building Burkett was apparently arrested for impersonating a police officer, as it seems he’s not the chief of police of the Louisiana Choctaw nation as he claimed. We can safely say that isn’t the best start to a political campaign that we’ve ever seen.

Abraham is all but certain to win in a landslide, likely in the primary. But don’t be surprised if, while Fleenor’s campaign raises little money in its own right, there is a good amount of Democrat PAC money spent in the LA-05 race dirtying up the congressman. Abraham’s fundraising hasn’t been as robust as one would have expected, seeing as though he only had $420,000 in cash on hand as of June 30, and going forward he might have liked to focus his fundraising efforts on the 2019 governor’s race. He’s not going to be able to do that, and there is an expectation in some quarters that while he’ll have no trouble winning this fall he’ll be dodging haymakers from Edwards by way of that PAC money.

Abraham’s opposition wasn’t the biggest surprise on Friday. This was…

Nobody expected Kyle Ardoin, who has served as the First Assistant at the Secretary of State’s office under both Jay Dardenne and Tom Schedler before taking over for Schedler after his resignation as the interim in the job, to mount a campaign. It came out of the blue. And Ardoin’s entry throws the lone statewide race of this fall into full-blown chaos.

Ardoin wasn’t the only late entry, as the race now has no less than nine candidates in it. Those are…

Beyond those announcements, there weren’t any real surprises. Among the other congressional races around the state some are quite crowded, as was expected. For example, there are five challengers to Steve Scalise in the 1st District. Three of them – Lee Ann Dugas, Jim Francis and Tammy Savoie – are Democrats, while Howard Kearney is a Libertarian and Frederick “Ferd” Jones is an independent. Scalise will win easily. It’s likely Clay Higgins will also win easily over a multitude of minor candidates in the 3rd District, including Democrats Rob Anderson, Mimi Methvin, Larry Rader and Verone Thomas, Libertarian Aaron Andrus and Republican Josh Guillory.

Meanwhile, Cedric Richmond has three challengers in the second district, including Beldon “Noonie Man” Batiste, Shawna Rodriguez and Jesse Schmidt. All list themselves as Independent or No Party. None appears capable of mounting much of a challenge to the incumbent.

And in the Sixth District, incumbent Garret Graves will have to fend off Democrats Andie Saizan and Justin DeWitt along with independent Devin Lance Graham.

In the three Louisiana House of Representatives special elections this fall, one has already been decided. That’s the 10th District race to replace Democrat Gene Reynolds, and the seat will flip to Republican…sort of. Wayne McMahen, a recent convert to the GOP backed by Reynolds, will run unopposed after no challenger qualified.

Another seat formerly held by a Democrat will be a three-way race, as in the 33rd District two Democrats – Les Farnum, a Calcasieu Police Juror with a pro-business and conservative record belying his party affiliation, and Calcasieu Federation of Teachers President Teri Johnson – are seeking to keep the seat in “D” hands following Mike Danahay’s resignation to become mayor of Sulphur. The lone Republican in the race is Sulphur city councilman Stuart Moss. It’s thought Moss and Farnum will duel it out in the runoff.

And in the 90th District vacated when Greg Cromer became mayor of Slidell it’s a four-way fracas with three well-regarded Republicans – Mary DuBuisson, who served for eight years as Cromer’s legislative assistant, attorney Brian Glorioso and businessman/pastor John Raymond – slugging it out along with Democrat attorney Sean Morrison.