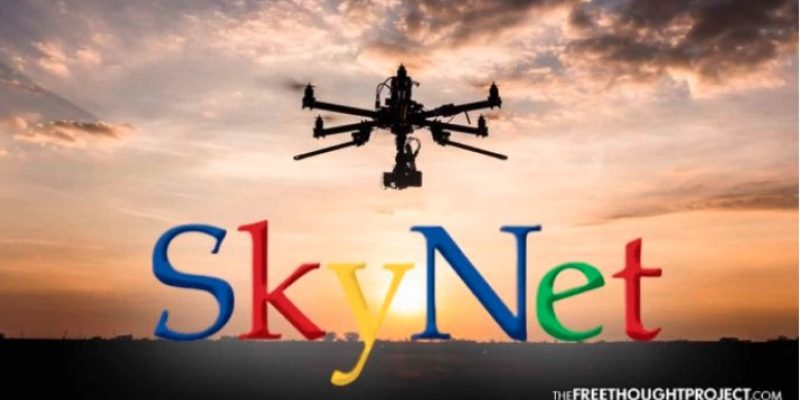 This is scary, and it’s not the movies, or Hollywood. It’s real life.

Google, the social media and search engine giant and censurer of all information on the Internet, has officially partnered with the Pentagon to create drones to spy on everyone.

The Free Thought Project announced: “Google has quietly signed a contract with the Department of Defense to militarize Artificial Intelligence by creating an autonomous drone fleet that will detect faces, images, and behavior patterns.”

Google’s partnership with the Department of Defense is militarizing artificial intelligence and machine learning technologies. It is working to improve the 1,100-strong fleet of drones to detect images, faces, and behavioral patterns, in addition to scouring through massive amounts of video footage in order “to improve bombing accuracy for autonomous drones.”

The stated goal is to “improve combat performance” by automating the decision-making process when locating and targeting an alleged combatant, The Intercept reported. Meaning, an AI drone, thanks to Google would determine who, where, and when to bomb.

According to a Pentagon April 26, 2017 memo, one objective of Project Maven is to accelerate the process of using big data and machine learning during combat situations and to speed up the process of analyzing collected data. It aims to:

The DOD states in “Unmanned Systems Integrated Roadmap” that there are three primary impetuses driving the push towards AI, which are “department budgetary challenges, evolving security requirements, and a changing military environment.” The U.S. Government Accountability Office (GAO) argues that there are problems with human-piloted drones, including fatigue, human error, and demoralization.

And at a 2017 Defense One Tech Summit Marine Corps Colonel Drew Cukor stated,

“People and computers will work symbiotically to increase the ability of weapon systems to detect objects.  Eventually we hope that one analyst will be able to do twice as much work, potentially three times as much, as they’re doing now. That’s our goal.

“We are in an AI arms race […] It’s happening in industry [and] the big five Internet companies are pursuing this heavily. Many of you will have noted that Eric Schmidt […] is calling Google an AI company now, not a data company.”

It’s no surprise that Google would be involved. The former CEO of its parent company Alphabet, Eric Schmidt, chaired the DOD Defense Innovation Board under the Obama administration.

Interested in more national news? We've got you covered! See More National News
Previous Article Here’s Some Good Economic News For Louisiana, But…
Next Article Six robberies in six hours: wouldn’t be a holiday in Houston without crime