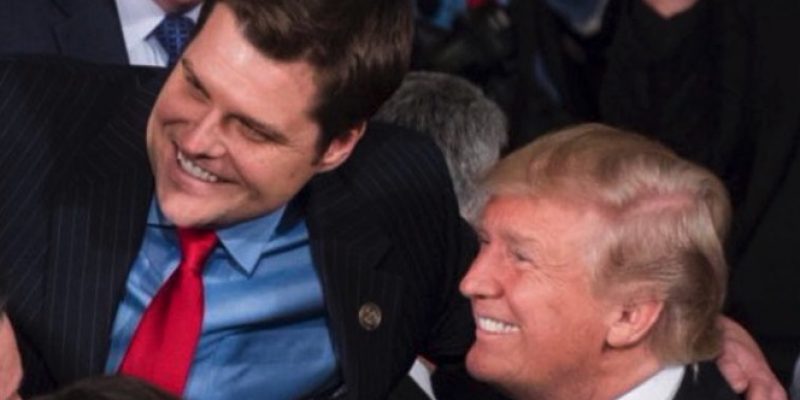 Rep. Matt Gaetz (R-FL)is considering filing a complaint with the Federal Election Commission (FEC) after he learned that Twitter allegedly suppressed his account. He tweeted:

Isn’t it ironic how I spoke with @Twitter senior executives before the House Judiciary Committee last week and now I am being “shadow banned”…this raises a lot of questions. https://t.co/SFHI1dIrCm

A Vice investigation published this week found that Twitter was censoring/shadow banning Republicans, including Gaetz and other members of Congress, the chair of the Republican National Committee, and others.

“Democrats are not being ‘shadow banned’ in the same way,” the report concluded, noting: “Not a single member of the 78-person Progressive Caucus faces the same situation in Twitter’s search.”

Twitter announced in May that the company would rely on “behavior-based signals” to boost the visibility of some accounts and to suppress the visibility of others as part of a step “to improve the health of the public conversation on Twitter,” the Daily Caller reports.

Gaetz, a member of the conservative House Freedom Caucus, said,

“The evidence is piling up that I am being treated differently on Twitter than people on the political Left and I don’t like that because I enjoy the Twitter platform, I enjoy the engagement, I enjoy the candor. I would think that having won my election with 69 percent of the vote to serve in the Congress that the marketplace of ideas could accommodate my views.

So I believe that Twitter may have illegally donated to the campaigns of my opponents by prejudicing against my content.”

Twitter product lead Kayvon Beykpour on Wednesday said the accounts were hidden in error and blamed the “usage of the behavior signals within search” for the fact that conservatives weren’t showing up in search suggestions.

He insisted that suppressing Republicans wasn’t related to politics. In a series of tweets he wrote:

“To be clear, our behavioral ranking doesn’t make judgements based on political views or the substance of tweets. We recently publicly testified to Congress on this topic. Some accounts weren’t being auto-suggested even when people were searching for their specific name. Our usage of the behavior signals within search was causing this to happen and making search results seem inaccurate. We’re making a change today that will improve this.”

Beykpour did not explain why the Vice investigation found that prominent conservative accounts were suppressed more than liberal accounts.

However, Ronna McDaniel, GOP Chairwoman, had this to say:

The notion that social media companies would suppress certain political points of view should concern every American. Twitter owes the public answers to what’s really going on. https://t.co/i9UtbxJrt0

Twitter “SHADOW BANNING” prominent Republicans. Not good. We will look into this discriminatory and illegal practice at once! Many complaints.

People are asking us if we shadow ban. We don't. Read more to get all the facts.https://t.co/UUg6NTPvJK

“Why is it only Republicans that are having this problem?” she asked. Why are the “thought police” of Silicon Valley determining which voices can be heard on social media platforms?

“I want to know: what is your process? Be transparent,” McDaniel said. “You owe that to your users, to let us know our voices will not be suppressed because you don’t like what we think.”