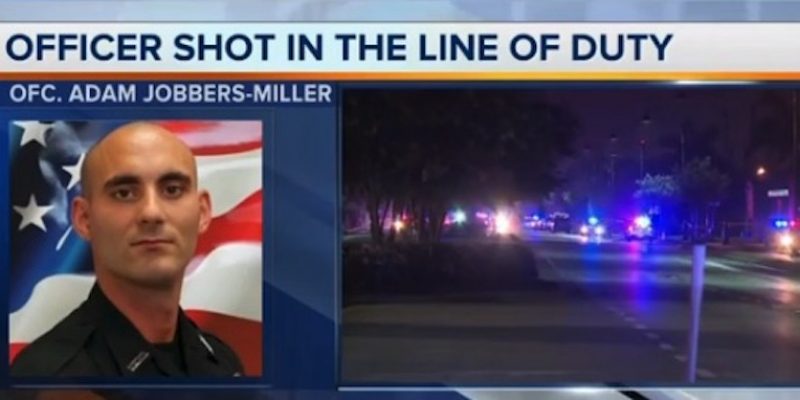 Fort Myers Police Chief Derrick Diggs announced that they have a suspect in custody for shooting Officer Adam Jobbers-Miller in the head.The shooter is 29-year-old Wisner Desmaret, an illegal alien from Haiti. He is facing a minimum of 8 felony charges, including Attempted 1st Degree Murder. He is the only suspect in the case.

“We got our guy, we got our man,” said Chief Diggs.

Officer Jobbers-Miller is in critical but stable condition being treated at Lee Memorial Hospital. Blood donations are needed to help him.

According to Chief Diggs, officers responded to a 911 call at 7:16 p.m. on Saturday from the Marathon gas station on MLK Boulevard in Fort Myers. A person was seen assaulting a group of young men who took a cell phone from their vehicle.

Minutes later, responding officers located the suspect and confronted him on Flint Drive. While he was being taken into custody, Desmaret reportedly fired a shot at the officers. He ran back to the gas station where he was finally apprehended.

A witness, Thomas Chelzer told Four in Your Corner that a man with a gun in his hand ran into the station and tried to jump over the counter. Chelzer says he was inside with the owner when police surrounded the gas station.

Desmaret has several previous arrests on record in Sarasota and Lee counties, including a 2011 arrest following a 4-hour stand-off at a home on Carrell Road in Fort Myers, and most recently a trespassing arrest in Sarasota in March 2017.

On Sunday, roughly 150 people held a prayer vigil outside of the hospital to show support for Officer Adam Jobbers-Miller. Many were officers with Fort Myers Police, Florida Highway Patrol Troopers and Lee County Sheriff’s deputies.

One group, the American Military Veterans Foundation in Cape Coral, told Fox News that they were hopefully optimistic that Jobbers-Miller would recover. “We’ve got a 29-year-old young officer up there that really needs everybody’s prayers to be lifted up, that he gets better and has a speedy recovery and that it doesn’t change his life dramatically for the worst,” said David Souder.