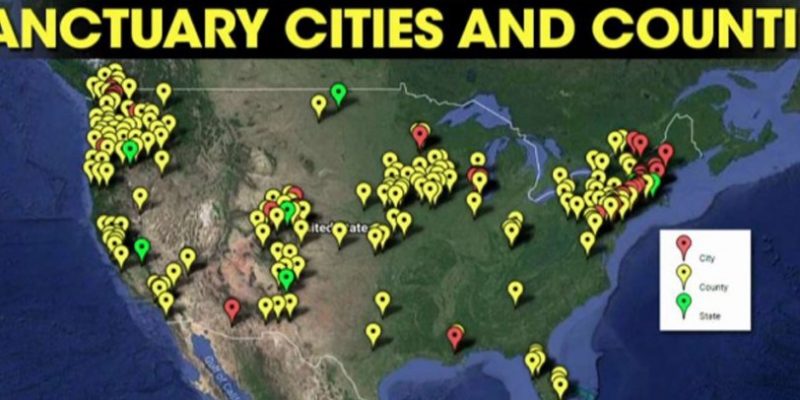 According to the Federation for American Immigration Reform (FAIR), half of America’s population lives in “sanctuary” cities that protect illegal aliens and criminals from prosecution and deportation.

FAIR calculates there were 564 states and municipalities that refuse some level of cooperation with federal immigration authorities as of April 1, and increase of 200 since President Trump took office. There were only 40 “sanctuary” cities when Obama took office.

The list includes entire states like California, Illinois and New York. And, major cities and counties like Fairfax, Montgomery and Prince George’s counties and the District of Columbia in Virginia, Maryland and Washington, D.C. respectively.

“This is just an astounding and a dramatic surge of sanctuary jurisdictions. They’ve doubled in just two years, and if you game that out, if the exponential growth continues, it’s not going to be long before it’s accurate to say the U.S. is a sanctuary country.”

However, FAIR included jurisdictions that ban police or other officials from asking about immigration status, forbids communication with U.S. Immigration and Customs Enforcement (ICE), and refuse to detain illegals for ICE.

The Washington Times reports, “ICE officials say a single deportation officer sitting in a jail checking names could identify and interview perhaps 10 deportable migrants each day. But without access to jails, ICE has to send out entire teams to track down each person — a process that involves time-consuming stakeouts and the danger of an encounter in the community.”

As a result, ICE arrests from jails and prisons have dropped “from more than 85 percent of the total from 2008 to 2011 to less than 70 percent now under the Trump administration,” the Times reported.

Interested in more national news? We've got you covered! See More National News
Previous Article FINALLY: Sex-Ed Sit Out over disgusting curriculum
Next Article The Baton Rouge Democrat Attempt At A Metro Council Power Play Appears To Be Over…