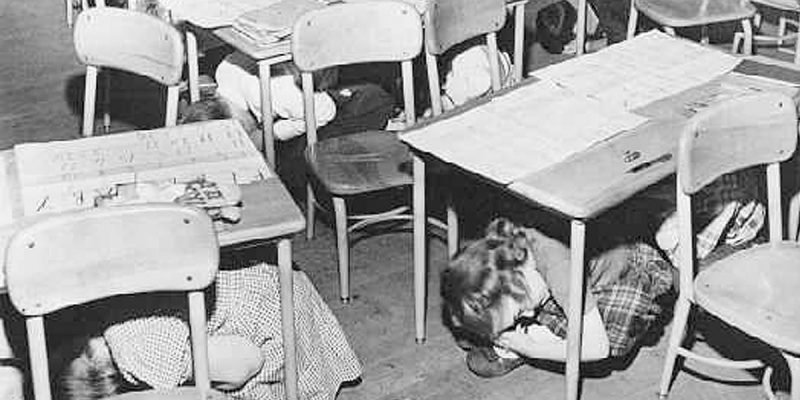 From the amount of coverage Russia has received in the mainstream media, one might think we were in the height of the Cold War. Missiles are heading to Cuba. Duck-and-cover drills are being practiced in the classroom. Citizens are lying awake at night with cold sweats, fearful if the sun will rise on the morrow.

No doubt this crisis left a deep scar on the memory of Americans that had to live through these days. Such a terror is not to be taken lightly and it lasted for decades. Present day attempts at relations with this foreign power are therefore to be exercised with extreme caution. Our grandparents, harboring such memories, would likely not tolerate embracing this once hostile nation with open arms.

The deep psychological impact of the Cold War era on Americans is thus available as a tool if some forces wish to use it as such. How unfortunate it would be if forces within our own nation would psychologically abuse fellow citizens for the sake of some political goal. Surely, we wouldn’t dare treat members of our very own communities this way.

The relentless Russia news segments must then represent some extreme national security risk. Hardly a day has gone by in the 1½ years of the Trump presidency without mentioning the influence of Russia, the national epitome of evil, on our domestic affairs. With such overwhelming coverage, Americans doubtlessly once again are extremely fearful of this Cold War adversary.

Oddly enough, this is not the case. Earlier this month, a Gallup Poll revealed that less than 1% of Americans think the Russia situation is the most important problem facing the country today. The Poll had to insert an asterisk (*) in the column due to sheer absence of Americans who are tormented by fears of present day Russia.

Something is not right here. These puzzle pieces simply just do not fit together. How can wall-to-wall coverage of evil Russia coincide with Americans’ opinion of Russia getting better? How can we explain this bizarre phenomenon?

Maybe Americans just have not yet awakened to the wickedness across the ocean. If this is the case, the coverage can not stop now. Our times are perilous. We cannot stop until “evil Russia” is our babies’ first words.

On the other hand, maybe mainstream news is out of touch with their viewers and Americans in general. But we dare not spare a second to consider this. Trump just met with Lucifer himself! He has even invited him to Washington!

The Helsinki summit has set many brains ablaze. Just the idea of engaging in diplomacy with the leader of the underworld has earned Trump accusations like being “in bed with Putin,” and being “Putin’s apprentice,” by Representative Maxine Waters. With varying rhetoric, these sentiments are largely shared on almost every news network.

Why can’t Americans see what all of these establishment figures see? Maybe these figures just need to speak louder. Bring bullhorns outside the White House. Accuse Trump of treason. Set fire to America – before Putin does, of course. Then Americans will see just how treacherous is our current predicament.

Interested in more national news? We've got you covered! See More National News
Previous Article Papa John’s Founder in hot water over alleged racial slur, Louisville up in arms [video]
Next Article HVEEM: Trump Derangement Syndrome Is All Around Us