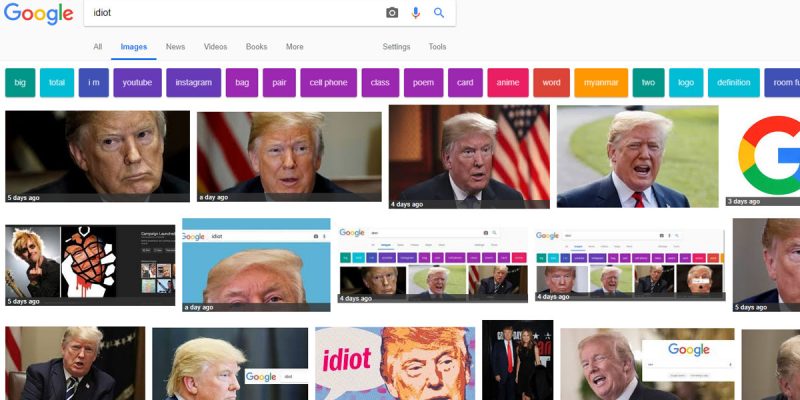 The most widely used online search engine is passively insulting the leader of our country. A simple Google Image Search of the word “idiot” fills the web page with images of President Trump. It is a worthwhile thought to consider if 20th century America would stand for such a depiction of our President. When Americans were once unified, winning two world wars, cultivating the greatest social communities the world has ever seen, would such blatant degradation of our leader even be possible? Is it even conceivable?

America has changed in many ways since these glory years. Even symbolically acknowledging how great we once were by wearing a MAGA hat invites hostile encounters. Admiring certain national qualities of our past is met with resistance that increases by the day. President Trump, acting as the beacon of passionate American nostalgia, is the go-to target of this resistance.

Anti-Trump protesters can be seen across the country acting out their unpatriotic defamation. Look past the green hair, gender confusion and too many piercings to count. Boxing dummies made to look like our President are being used for individuals to release their built-up hatred, or indentitarian frustration.

A recent protest in Portland, Oregon featured a beheading of a figure made out to be our national leader. This was acted out by some people in a group that calls itself Occupy ICE. The name speaks for itself. There exists a faction of citizens that want to get rid of immigration enforcement, thus advocating for open borders, and will guillotine a papier-mache model of the President of the United States in effort to achieve their goals.

In other times and places, such actions would be deemed treasonous. A open rebellion with violent symbolic death’s of one’s leader is historically not treated with kindness. Only in today’s America can such disrespect go without consequences. We do love our freedom. It is thanks to this freedom that the true nature of some questionable characters is revealed.

These anti-Trump fanatics seemingly are not loyal to the idea of a thriving America. The numbers suggest America has benefited greatly since Trump has taken office. Companies are coming back to our shores. Steel plants are reopening from what seemed to be an eternal close. Unemployment rates are at record lows. Labor force participation rates are going up for the first time since the year 2000.

Why are so many among us vehemently opposed to our President? Judge Jeanine Pirro may have said it best when she accused Whoopi Goldberg of having “Trump Derangement Syndrome.” The medical term has thus been identified.

Be aware, this condition may be contagious. The symptoms may only get worse.

Call the psychiatrist. Many leather couches are in order. Trump Derangement Syndrome is sweeping the nation.