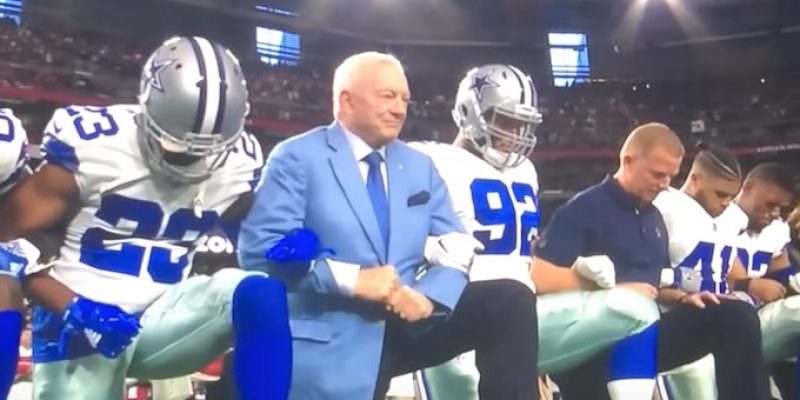 Dallas Cowboys owner Jerry Jones spoke about his players and the national anthem at an annual news conference prior to opening the team’s training camp in California.

He said that he insists that his players stand for the national anthem, and won’t support anyone who stays in the locker room.

When asked by reporters if he would support players staying the locker room, he said “No. Our policy is that you stand at the anthem, toe on the line.”

His announcement comes one week after the NFL and the players’ union agreed to suspend the owners’ rule allowing players to stay in the locker room. The rule also allowed teams to discipline players who kneeled or sat during the anthem.

According to the Associated Press, the Miami Dolphins team policy is to suspend for up to four games every player who protests the anthem. After news of their policy broke, President Trump tweeted: “The $40,000,000 Commissioner must now make a stand,” referring to Roger Goodell.

Last season, Jones was the first owner to declare that he would bench a player for protesting during the anthem. He said, “Our team knows where I stand on the issue.”

The NFL started requiring players to be on the field for the playing of the national anthem in 2009, when it signed a marketing deal with the U.S. military.

Jones owned the team for 20 years when players were both inside and outside of the locker room when the anthem was played.