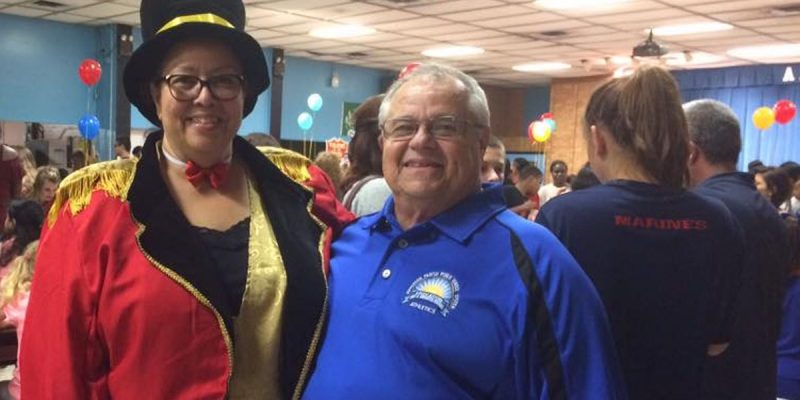 This is an item we come back to every now and then, as it’s something everyone knows about (at least, all the Republicans do) but doesn’t seem to have a good line on fixing – and probably won’t be fixed until party primaries are brought back in Louisiana.

Namely, that since Democrats are no longer particularly competitive in most of the state with the exception of its major urban centers it’s become fashionable for people to slap an “R” next to their names when running for office without any particular commitment to actually represent the values that letter is supposed to signify.

We see it all the time. The Louisiana legislature is filled to the brim with RINO’s who figuratively were Democrats five minutes ago, frustrating voters by making the enactment of conservative policy positions outside of those involving God, guns, gays and abortion irritatingly difficult. Taxes increase, government grows, and it’s a Republican majority, at least in name, which is responsible.

And in seats like the open House District 10, a decidedly conservative area in northwest Louisiana where Donald Trump carried 65 percent of the vote in the 2016 presidential election and where Democrat Gene Reynolds was one of the more mismatched state representatives with the voters from an ideological standpoint, things aren’t getting better – a Republican, Wayne McMahen, who was a Democrat until earlier this year ran unopposed with Reynolds’ backing. It’s fair to say it would be a miracle if McMahen’s voting record was reflective of his newfound party affiliation.

There might be no better example of this than in Jefferson Parish, where RINO’s seem to roam largely unmolested by accountability. We know about some of the more egregious Jeffersonians in the legislature – John Alario, Danny Martiny, Julie Stokes – and it’s little secret the contribution the supposedly Republican former sheriff Newell Normand made to getting John Bel Edwards elected governor in 2015. The Republican brand means little in Jefferson when so many who carry it fail to advance the conservative principles it was founded on.

Or worse, when so many are engaged in, and are supportive of, corrupt and dirty politics.

There’s a school board member in Jefferson who’s a good example of this. Marion Bonura’s name comes up often among the conservative set in Jefferson as perhaps the worst impostor with an “R” by his name, and things went critical earlier this year when Bonura was the only Republican to vote against censuring the race-baiting, sexual-harrassing Cedric Floyd for his multiple disgraces.

“This is a roundabout way to hurt him in his election without saying the word ‘election,’ ” Bonura said at the time. “This is nothing but to divide this board. I’m really disappointed in that.” This after Floyd had cost the taxpayers some $75,000 in legal fees and settlement money for having molested a secretary with the school system. Another plaintiff then came forward with similar allegations against Floyd and Bonura accused her attorney, a former school board member named Michael Delesdernier whom Bonura defeated in 2014, of “having a chain around her.” That added Bonura’s name to the second suit, which is now in federal court.

And then there was the $22,000 in travel costs Bonura rang up from 2015-17 as a member of that board, which didn’t quite rise to the level of abuse Floyd was guilty of but certainly dwarfed the $2,000 or so other members were spending.

Records show that Marion Bonura flew business class several times after he first took office, but he said he stopped the practice when he found out about the added cost. Bonura had the third-highest travel expenses over the period at $22,648.

“My first year, I didn’t know that I could get, I thought it was that we had to take the business flight,” he said. “Come to find out, we didn’t need that. The only (benefit) was getting on the plane before 15 other people. Didn’t make sense. So I tell them when they make my reservation, get me the ‘Wanna Get Away’ rates.”

While Bonura said he looks for ways to save money on trips, he defended going on them.

“I want to be on this board to advance the students. And you can’t do that sitting in Metairie,” he said. “You gotta go out and see the ideas that are out there.”

Bonura also drove reform-minded activists up a wall earlier this year when the school system was working to hire its new superintendent Cade Brumley, seen as a star in the business after a very successful stint running the DeSoto Parish schools. In a highly contentious meeting over Brumley’s salary and expenses the school board would cover, during which Floyd said Brumley was only being offered his $269,000 contract because he is white, Bonura joined Floyd and fellow Democrat Ricky Johnson in voting against the contract (which was approved on a 6-3 vote).

It’s clear he doesn’t meet the GOP standard – not on race-baiting, not on pursuing excellence rather than waste and not even on voting Republican. At the 2:30 mark in this video you’ll see what Bonura is actually about…

That John Bel Edwards’ wife is a teacher is hardly a valid reason to make him governor. This is basic quality control, not even ideology.

And then there is this, from his Facebook, which wouldn’t particularly advertise a conservative political position… 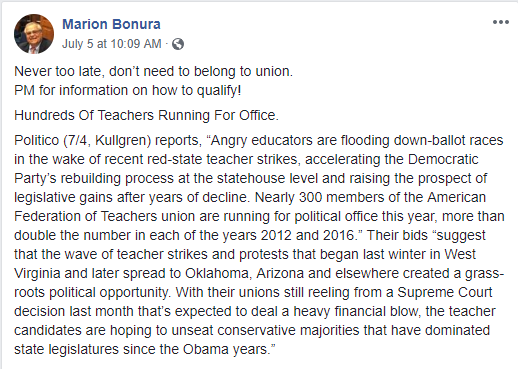 Bonura has some of the Jefferson political crowd backing him so far – sheriff Joe Lopinto and state representative Joe Stagni, for example. That he’s doing so while also enjoying the support of the Louisiana Federation of Teachers and Floyd is hard to process.

Unless you recognize that an “R” next to one’s name doesn’t mean what it’s supposed to. Particularly not in the state’s most heavily-populated and supposedly conservative parish.

This kind of thing will continue until the voters do something about it. If Louisiana had party primaries and candidates like Bonura would first have to face Republican primary voters before setting themselves upon the electorate as a whole, it would be easier to hold them accountable. But in our current jungle primary system it helps to be The Democrats’ Favorite Republican. Little wonder so many Louisiana voters are so cynical about our politics.