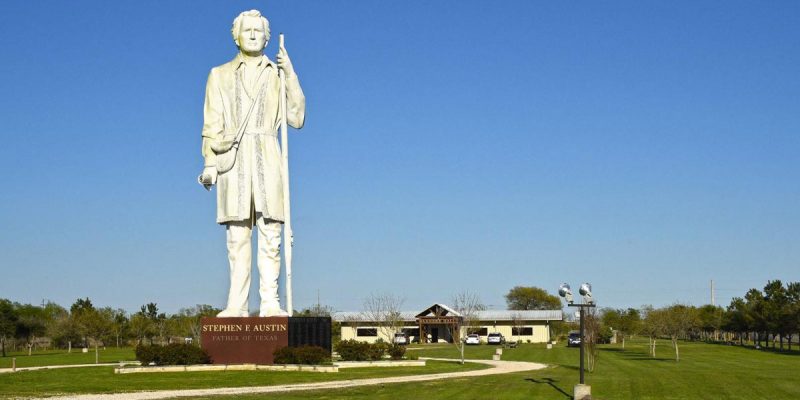 …but the fact that people on the government payroll there are even bringing up such an idiotic idea tells you enough of what you need to know about how far down the road of cultural Marxist lunacy we are in this country.

The suggestion that Austin, Texas should be called something else so as to disassociate the city with the supposed horrors of one of Texas’ brightest historical stars came out of the city’s Equity Office – which released a memorandum last Thursday listing a host of street and park names which should be considered verboten thanks to their connection with “segregation, racism, and/or slavery.”

Brion Oaks, the Chief Equity Officer with the City of Austin, cleared the confusion up.

“I highly doubt that Austin is going to be changing its name, but I know that has been grabbing the headlines,” said Oaks. “But I think for the public, it is really important to look at some of the history behind some of our historic Austin figures.”

Oaks said council asked the Equity Office to do research in a resolution passed in October.

“To conduct research and look at any of our city-owned assets that could potentially be tied to the Confederacy and Civil War and also kind of connected with the history of slavery,” Oaks said.

Oaks said they presented two lists in the memo.

“These were assets that we identified that were directly connected with leaders in the Confederate Army, so they were really close in line with the language in the resolution,” said Oaks.

The second list, which included City of Austin, was a continuation of the research, Oaks said.

“[The second list] was sort of a little bit broader look at historical figures that had more relationships or ties to either slavery or segregation or racism within the area of the city,” Oaks said.

One of the historical figures was Stephen F. Austin.

“He was a slave owner and played a prominent role in helping Texas to preserve slavery during the war with Mexico,” Oaks said.

Oaks laughed when asked if that meant a new name was coming to the city.

Who is Brion Oaks, and how does one get the title of Chief Equity Officer? Well, here’s his bio from the city of Austin’s Equity Office…

Brion Oaks is first Chief Equity Officer for the City of Austin. Brion is responsible for working with City leadership and local communities to create an equity framework and facilitate dialogue and organizational practices that support the development and adoption of equity as a shared value.  He serves as the technical expert in addressing equity as it is applied to city wide policies, programs, practices, and budget decisions with an overall vision to make Austin the most livable city for ALL.

Prior to his arrival to the City of Austin, Brion served as the Vice President of Health Equity for fourteen years at the American Heart Association’s Southwest Affiliate. In this capacity, he oversaw the affiliate’s department that was dedicated to improving cardiovascular health for vulnerable populations and reducing disparities in the prevention and treatment of cardiovascular disease.

Brion earned his Bachelor of Science in Political Science from University of Houston and Master of Public Administration from Texas State University. Prior to his career at the American Heart Association, Oaks worked as a legislative assistant for state Rep. Dora Olivo, D-Rosenberg, and as a project coordinator for the Texas Healthy Kids Corporation and the Texas Medical Foundation.

Throughout his career, Brion has focused on improving health outcomes for minority communities and addressing disparities in access to health care services. Oaks is on the Central Texas Diversity Council, Board of the Austin Chapter of the National Association of Healthcare Executives, and KLRU Community Advisory Board.

Nothing in the resume exactly screams “real job,” does it? In other words, this is somebody who’s made a living out of lumping people into groups based on demography and then squawking about supposedly disparate treatment – as though if you’re black and you have a heart condition what you really care about is how black people are collectively treated by heart surgeons rather than how you yourself will be treated.

And now he’s busy trying to change street names because many of the people who created Texas out of a wilderness happened to have political and lifestyle preferences which are badly out of date.

What does the memorandum say about Stephen F. Austin? That he Believed Things He Shouldn’t Have Believed…

And this is the sum of the man who literally founded Texas?

The truth of Austin’s views on slavery is, by the way, far more complex than Oaks’ memo lays out. Austin said philosophically he found slavery inimical to the American concept of liberty – but he did defend the practice against Mexican attempts to ban it mostly because of the practicalities of doing so in Texas at the time. Austin had brought 300 families to Texas under the empresarial contract his father originally had received from Spain, and those families were engaged in raising cotton and sugar.

In the 1820’s it was more or less impossible to farm cotton or sugar without slaves in a then-remote place like Texas. That’s hardly a moral justification for it by today’s standards, but that doesn’t make it any less the truth. There were no tractors or combines in the 1820’s, and there was no agricultural mechanization available. The only way to harvest cotton or sugar on a scale large enough for commercial viability was through the use of people who could be induced, one way or another, to do exceptionally back-breaking work in nearly-unbearable heat.

The Industrial Revolution, particularly when it reached agriculture, changed all that. Things are better now, and therefore we rightfully look down on the awful practices of the past. But that’s because we have better options than Austin and his Texas settlers had. We have better information than they did, too. We have the benefit of their experience, assuming we’re not too stupid to recognize it and learn from it.

And that’s what this latest idiocy, which is a by-product of Mitch Landrieu’s destructive anti-Confederate crusade in New Orleans, is all about – namely, to whitewash history that the Left in its emotional instability cannot abide and thus denying all the opportunity to understand its lessons. After all Austin, who was a diplomat and a patriot of the fledgling Republic of Texas, was wrong about slavery – and he knew it. But for his efforts, though, Texas would be a very different – and certainly very worse – place.

As an aside, in 50 or 100 years, or less, technology will make abortion positively obsolete – no one should doubt that things like in vitro adoptions or extreme incubations will one day spell a disconnect between terminating a pregnancy and ending a life. And when that day comes, does anyone doubt society will then look upon abortion as a brutal, murderous practice and those who advocate for it to be legal – or those who participate in it as providers or customers – as monsters by people with access to easy technological solutions to today’s moral crises? We notice some of the same people participating in the demonization of our slaveholding ancestors might well fall in that camp, and see rich irony there.

We said it about Robert E. Lee and Mitch Landrieu, but Stephen F. Austin was a far more consequential and moral man than is Brion Oaks. If nothing else Oaks is coloring far outside the lines of his office’s mandate. The Austin Equity Office was formed just two years ago in 2016, to “[Identify] gaps and disparities in services and programs in the city, as well as help create ways for city departments to address those needs. The position will also help community groups work with the city to ensure equal access to city programs and services.”

“Services and programs” have nothing to do with street names. If your majority-minority neighborhood is plagued with unsafe drinking water or streets littered with potholes, or failing schools, those could well be problems one would surmise an Equity Office ought to involve itself in trying to fix – though it’s worth asking why you need an Equity Office for that if those neighborhoods are represented by members of the City Council. After all, one of the traditional functions of a city council member is constituent services – if you have an Equity Office you’re outsourcing a function of an elected official to an unelected one.

And why would you be doing such a thing? Our buddy Adam Cahn, who has fought a running rearguard action against Austin’s loony Left for quite some time, nailed the reason perfectly…

There’s a lot we could say, but it reflects one reality: This is what happens when the government has too much money.

The name change aspect of this current controversy attracted national attention, but obscure government bureaucracies do nonsense like this all the time.  The only difference is that this specific example was easily mockable.  But this is what obscure bureaucracies do.

To purge these bureaucracies, force their parent body to set financial priorities.  We’ve sat through enough C of A budget discussions to know that a spending/revenue cap with teeth will kill many birds with a single stone.  That remains the case.

So we’re less than two years into the life of the so-called “Equity office” and we’re already seeing mission creep.  Once again, this is what the government does when it has too much money.

Bottom Line:  If you want to change behavior, cut off the money.

He’s exactly right. A fiscally balanced local government doesn’t have the funding to employ a Brion Oaks to dream up street and city names which must be changed because he doesn’t like the history behind the letters on a sign. Only a government which is out of control in its waste and agglomeration of power does such a thing.

Experience teaches us that people working together build, rather than destroy. A government looking for something to do will destroy much more often. And that’s what the history-loathing bureaucrats and politicians in Austin are slowly attempting.

Interested in more news from Texas? We've got you covered! See More Texas News
Previous Article Professor who cheered death of Barbara Bush demands white editors ‘hand over positions of power’
Next Article HVEEM: The Era Of The Transgender Superhero Has Begun