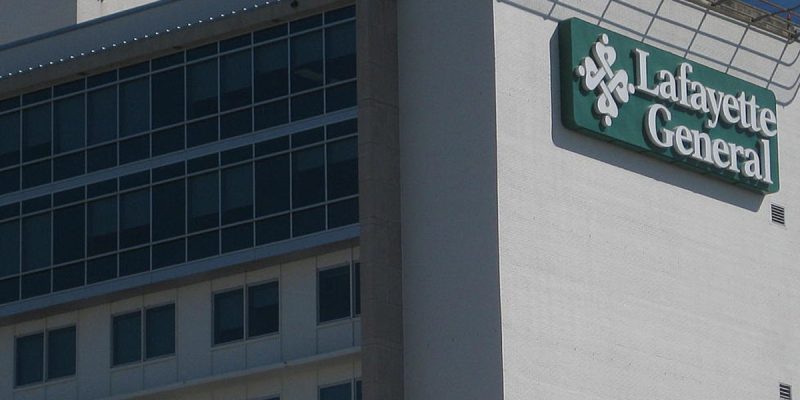 In Acadiana, there is quite a furor developing among the Lafayette-area Republican legislators, and particularly those who voted against the $463 million sales tax increase in last month’s special legislative session, over a letter sent to several of them by David L. Callecod, the chairman of the Louisiana Hospital Association and president of Lafayette General Health.

The letter reads almost as if it were drawn up by Gov. John Bel Edwards’ communications team and sent to Callecod for his signature. It’s polite in form but highly obnoxious in content, and a number of Acadiana-area legislators are quite incensed about it.

Here was a copy of the letter which was delivered to Rep. Blake Miguez (R-Erath)… 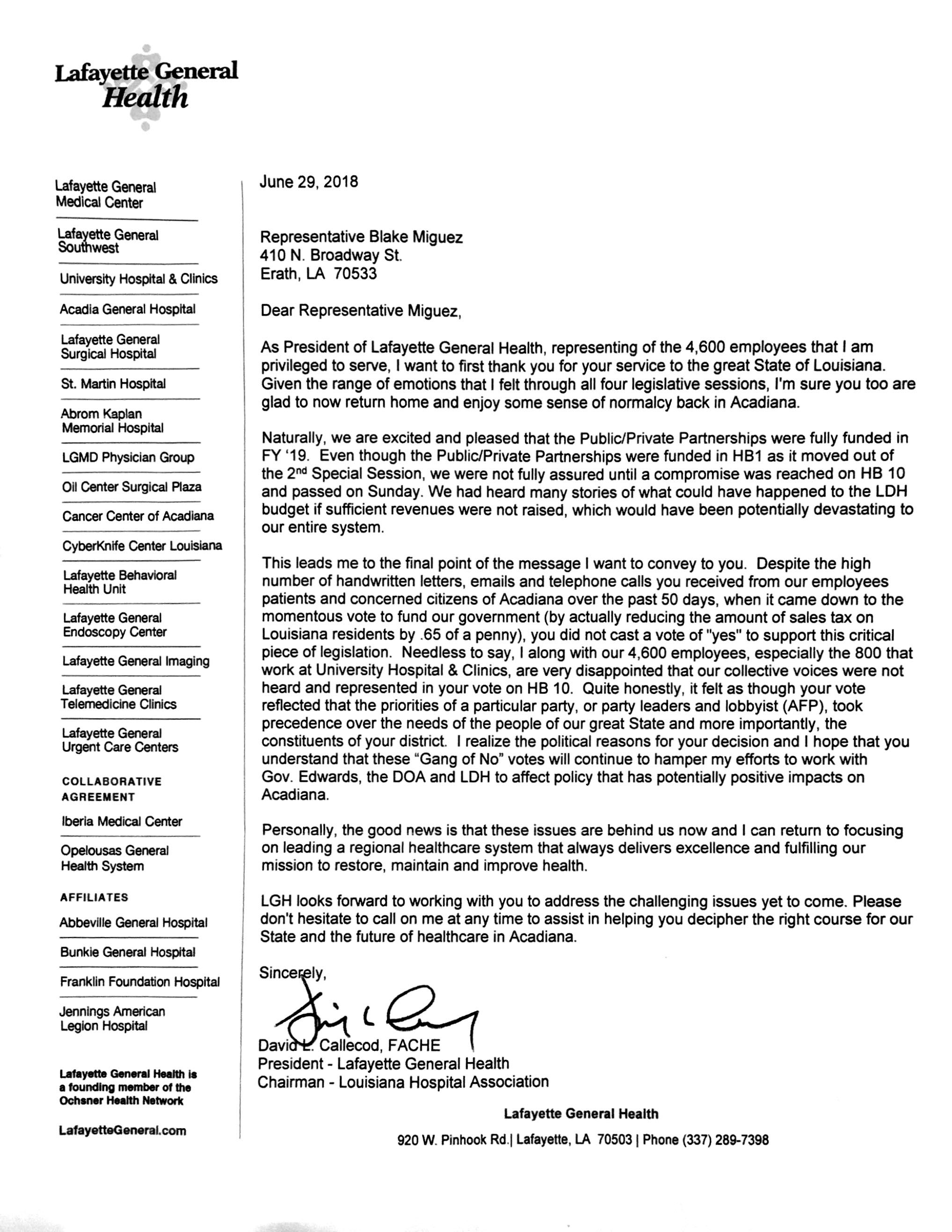 Miguez was on vacation when the letter was delivered, and didn’t see it until earlier this week. On Wednesday Miguez guest-hosted the statewide-syndicated Moon Griffon Show, and Callecod’s letter was a major topic of conversation.

What follows are excerpts of the show transcript by way of Miguez’ response to Callecod. First, though, from Miguez’ note to us…

Apparently this letter was sent out to all of the Acadiana delegation members who voted no on HB10. Many of these legislators interpreted this letter the same as I and were very disappointed. It almost seems as though it was written by Richard Carbo himself and signed by Callecod.

The second paragraph of the letter, the one which talks about the danger that the “public-private partnership” hospitals, which are facilities in the old Charity Hospital system, faced thanks to potential budget cuts, brought this response from Miguez on the air…

Yes, Louisiana Department of Health was fully funded (and then some) at the end of the 2nd Special Session.

LDH’s budget in FY ‘19 has grown to a whopping 14 billion dollars which is nearly double that of 10 years ago. This letter is self-proving that no matter how much money government gets, from you the listeners, it will never be enough and they will always keep asking for more. Mr. Callecod mentions stories, and they were just that! Stories made up by the Edwards administration with an agenda to raise taxes and grow government. Governor Edwards was so eager to raise taxes on the people of Louisiana that he used scare tactics by sending out lay off notices to hospital employees and eviction notices to elderly in nursing homes that they would be kicked out on July 1 if the budget was cut by even a dime. These scare letters concerned many citizens across the State of Louisiana.

But many of us who have been around the Capitol over the past several years knew that these lay offs and evictions were never going to happen. Like when the Governor threatened to end LSU football, this was just another political show.

Mr. Callecod is disappointed because I voted against $3.4 billion worth of sales tax increases over the next 7 years funded by the hardworking taxpayers in my district. It is concerning to me that he believes that this enormous tax increase is instead a sales tax decrease. Does he not remember that two short years ago, immediately after Edwards took office, that he pushed the legislature to raise $1.2 billion in “temporary sales tax?” It was promised to the taxpayers of Louisiana that the tax increase would sunset after 28 months once spending and tax reform measures were put in place. If HB10 would not have passed, the sales tax rate would be much lower than it is today. And Louisiana would no longer have the embarrassing title of having the second highest combined sales tax in the nation.

And a bit more…

Yes, Mr. Callecod, I did receive many letters, emails, and calls from hospital employees, constituents, and patients who wanted us to make nursing homes and hospitals a priority. Some of these were personal friends of mine who are directly affected by this issue. But I received even more calls over the past two years from constituents asking me not to raise their taxes and for state government to learn how to live with the money that it already collects.

Mr. Callecod, don’t you understand that the Acadiana area is suffering from an economic depression and many here are struggling and can not afford to pay increased taxes?

These issues aside, I have a deep appreciation and respect for the 4,500 employees of these hospitals and the patients that they work hard daily to help. Because of this, I voted for a budget in the second special session that used the funds that the state had to prioritize funding to hospitals and nursing homes that help the elderly and needy of our state daily.

Many of us in the House recognized that this was not a perfect budget, but with a Senate that would not agree with us in a last-minute conference committee report, we passed this budget in the final hours of session to serve as a safety net budget for the elderly and needy of our state. The legislature wanted to send a message that hospitals and nursing homes are a priority. Mr. Callecod must have never received that message! In his letter, he is upset because the legislature did this without raising the taxes that Governor Edwards desperately wanted.

Mr. Callecod mentions party politics and special interest in his letter. But the public/private partnership hospitals that Mr. Callecod represents has its own team of lobbyists at the Capitol lobbying legislators daily. It is hypocritical of him to blame party politics or special interest groups as the reason for my vote against increasing taxes. The reason I vote against tax increases is because the hardworking tax payers in my district are struggling in a failing Louisiana economy and can no longer afford to continue funding a bloated state government. They demand accountability and efficiency in how tax dollars are spent. They also recognize that these tax increases without any meaningful spending reform will always lead to more budget issues in the future.

Miguez then defends the House’s “Gang of No,” the anti-tax faction of which he’s a vocal part..

In his letter, Mr. Callecod mentions my voting record and affiliation with the “Gang of No.” This is a “name” the statewide media has given to small group of about 25 House Republicans who stand strong in their votes against tax increases. This group of legislators believes that government spends too much money and raising taxes is not the answer to our budget problems or failing economy.

Mr. Callecod complains that the efforts of the “Gang of No” will continue to hamper his efforts to work with Governor Edwards’ to affect policy that impacts Acadiana. But there lies the problem Mr. Callecod, the majority of the people in Acadiana don’t support raising taxes and growing government at a rate twice that of the private sector. If my strong voting record against tax increases has spoiled those plans, then mission accomplished for the taxpayers of Louisiana!

And then finally, a response to Callecod’s offer to “help” Miguez “decipher” the best course for the state’s future…

I also look forward to working with Lafayette General Hospital because the hospital brings a tremendous value to our local community in the services that it provides. But Mr. Callecod, please stop allowing your loyal employees and the wonderful patients which you serve to be used as political pawns by Governor Edwards in his quest to raise taxes on the hardworking people in my district. If you ever need help understanding the constant struggles and frustrations of the everyday taxpayer, please give me a call because I would be happy to be their voice to you as I have been daily at the Capitol to others who want to grow government spending. Like you Mr. Callecod, I look forward to a brighter future ahead for Louisiana and it’s citizens. God bless the Great State of Louisiana.

Something tells us this story isn’t going to end anytime soon. In fact, it may be just getting started.