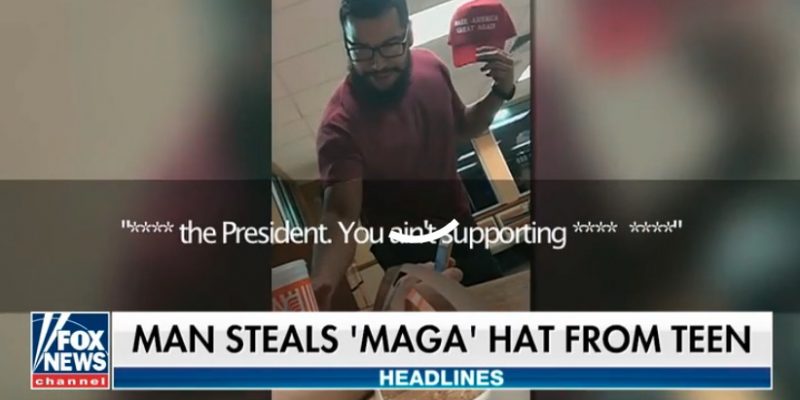 San Antonio 16-year-old Hunter Richard went to get some food at his local Whataburger and got more than expected. He was verbally attacked and assaulted by a man because he was wearing a Make America Great Again hat. The incident was caught on video. The employee was fired and police are investigating the incident. The video posted on YouTube of the incident https://www.youtube.com/watch?v=3llrQD7iLZI was taken down.

The video shows a man throwing a drink at Hunter’s face, who also took his hat from his head, pulled his hair, and left the restaurant with it. Hunter told the local news:

Hunter was out with his friends at the Whataburger off of Nacogdoches and Thousand Oaks roads in San Antonio. They say the attack was unprovoked. He told the local news:

A police report was filed and the suspect was taken into custody. In response, Whataburger released the following statement:

“We were shocked to see this video and certainly don’t condone this type of customer behavior in our restaurants. To be clear, no Whataburger employees were involved or witnessed the incident, and we ask that questions be directed to San Antonio PD as we continue supporting their efforts.” – Whataburger Corporate Communications

The man is heard yelling:
“You ain’t supporting s— n—-!” who then threw a drink towards the person filming the video.

The teens did not engage or respond. The man stole his red MAGA hat and was heard muttering “b—- a– motherf——” as one of the other teens sitting at the table appears stunned.

Video of the incident reportedly was posted on a Facebook page with a request for the public to help identify the “scum bag of the year.” It got more than two million views before being removed or hidden, according to KENS 5.

The man in the video allegedly was fired from his part-time job at a San Antonio bar after the footage began circulating on social media. Rumble bar in San Antonio posted on its Facebook page:

“It came to our attention earlier this evening that a part-time employee was captured on cell phone video assaulting another person at a local eatery. The assault took place, presumably, because this employee did not agree with the other individual’s political stance.”

“We have since terminated this employee, as his actions go against everything that this establishment stands for. THIS BAR IS A SAFE SPACE FOR EVERYONE! No matter your race, creed, ethnicity, sexual identity, and political stance, you are welcomed here!”