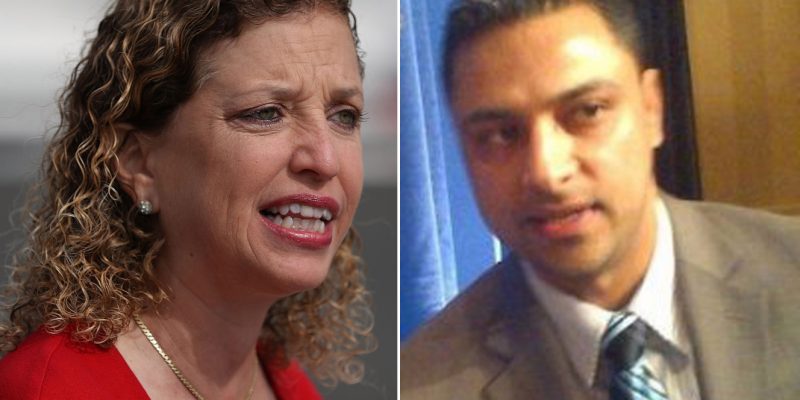 Imran Awan, the former long-time staffer of Congresswoman Debbie Wasserman Schultz, D-Fla., and other congressional Democrats – pled guilty Tuesday to one count of making a false statement on a home equity loan. Which is ridiculous.

He was caught leaking confidential information from the servers of Congress to foreign agents.

The U.S. Attorney’s Office for the District of Columbia issued a press release about Awan’s plea agreement that excluded any mention of his IT work for Congressional Democrats, including Wasserman Schultz. The headline: “Virginia Man Pleads Guilty to Making False Statement on Application for Home Equity Loan,” indicates the DOJ is covering up one of the worst scandals in American history.

Frank Miniter, whose new book, “Spies in Congress,”details the alleged spy ring believed to be led by Awan that may have been operating in the offices of more than 40 Democratic members of Congress.

“If not for my extensive research on this case, I might have assumed the government just couldn’t find enough evidence to make a solid case against Awan on more serious charges than bank fraud.

“When I asked Justice Department prosecutor J.P. Cooney why the government made this odd plea deal he just smiled and waved me away as he told me to ask the Justice Department Office of Public Affairs. The office declined to answer my questions.”

Awan’s is scheduled to be sentenced Aug. 21, with the possibility of no jail time.

“Just like that, the Department of Justice is making an important case go away as if nothing much happened,” Minter says.

Awan’s wife, Hina Alvi, is having all charges against her dismissed as part of the agreement.

The plea deal agreement even exonerates Awan, stating, “the Government agrees that the public allegations that your client (Imran Awan) stole U.S. House of Representatives (‘House’) equipment and engaged in unauthorized or illegal conduct involving House computer systems do not form the basis of any conduct relevant to the determination of the sentence in this case.”

But, what about the theft of government equipment?

One of Awan’s former tenants, a retired U.S. Marine, found in Awan’s property, and turned over to authorities several computers and smart phones with government markings on them.

What about the illegal copying of Democratic members of Congress’ emails?

Internal House Inspector General findings revealed that Awan copied the emails of up to 44 Democratic House members and other personal data and backed them up to a server “that reportedly went missing and to a Dropbox account.”

No charges have been filed against Awan for these alleged thefts, possible espionage and for providing false information (an image of the Democratic House Caucus computer server) to Capitol Police.

Writing a book about this Miniter writes, “was like piecing together an international spy thriller filled with anonymous sources, encrypted conversations, off-the-record meetings, foreign documents and hard facts from various court filings and from internal investigations in the House.”

What became clear to Miniter after interviewing over 100 people, was that “there is a lot of evidence here for investigators, but also a lot of political reasons why they might want this case to go away. Awan was even Wasserman Schultz’s IT aide when she headed the Democratic National Committee (DNC), which incidentally was when the DNC was hacked and the information given to Wikileaks.”