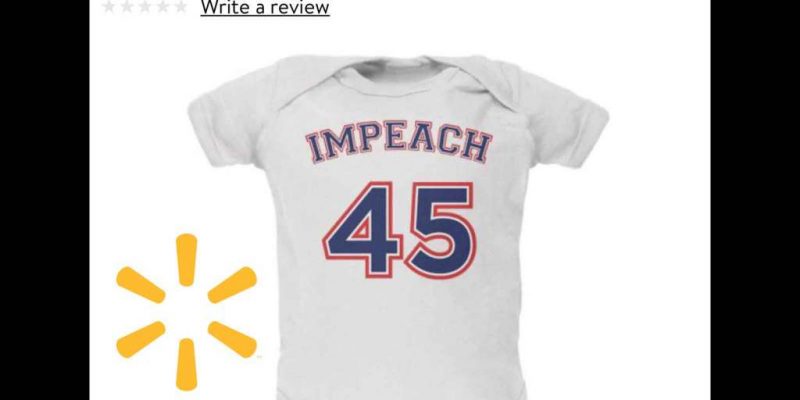 Walmart was slammed on social media after it was revealed that the mega-retailer was selling impeachment baby clothes, appearing to promote the outlandish calls to impeach President Donald Trump (for nothing, no crimes committed, nada.)

Walmart’s “Impeach 45” clothing was responded to by calls for boycotting the company.

.@walmart why are you selling Impeach 45 baby clothes on your website?????

What kind of message are you trying to send? https://t.co/PwI4nCVAZx

Not that I needed another reason to Boycott Walmart, but they just gave me one and solidified it for me.#BoycottWalmart #istandwithtrump pic.twitter.com/WJLPCBIs8u

if they really do, then i have nothing to say. but just seems they are fanning flames of division.

Walmart has reportedly responded to the outrage by taking down any clothing or paraphernalia related to the impeachment of Trump.

The company said in a statement to ABC:

“These items were sold by third party sellers on our open marketplace, and were not offered directly by Walmart. We’re removing these types of items pending review of our marketplace policies.”