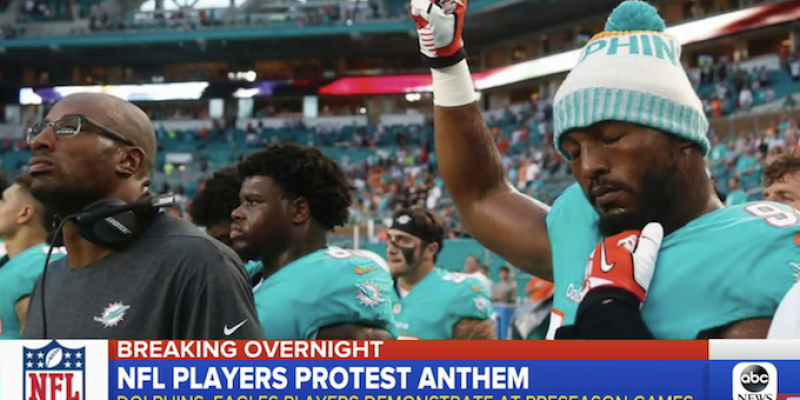 A new NFL season started on Thursday night, and there were more misguided National Anthem protests. Sadly, several players used the opportunity to express their grievances against their country, instead of respecting a great and unifying symbol of the United States of America.

Players who should have been expressing their deep gratitude and support for their country, once again, showed disrespect. President Trump responded by expressing his displeasure, tweeting, “The NFL players are at it again-taking a knee when they should be standing proudly for the National Anthem.”

Last night, two players on the Miami Dolphins team knelt while another one raised his fist in protest. Another two members of the Philadelphia Eagles raised their fists, in a black power salute. In Jacksonville, four members of the Jaguars stayed in the tunnel while the National Anthem was played, while three Seahawks players refused to take the field in Seattle, making a similar protest.

The exact reason for these demonstrations has never been clear. While some players have protested police brutality, others have called for more comprehensive criminal justice reform, such as reducing the incarceration rate among African Americans. Others have decried the poverty rate in the black community and advocated increased government assistance.

The players who have been protesting are not disadvantaged by any means. According to a Forbes 2015 study, the average NFL player earns $2.1 million annually. This is more than forty times the average American salary of approximately $50,000 per year.

Of the $15 billion that the NFL brings in every year, about 48% is dedicated to the players. To many hard-working Americans who spend their money to support the NFL and the players, the protests are infuriating. Without the fans buying the season tickets and the high-priced merchandise, there would be no exorbitant salaries. In fact, there would be no NFL.

This is the same message that President Trump tweeted this morning, “A football game, that fans are paying soooo much money to watch and enjoy, is no place to protest.” Of course, President Trump is right. If players want to protest on their own time, no one would have a problem. However, to do it prior to a game is more than inappropriate. It is injecting politics into an area that should be solely about entertainment.

Currently, there is no official NFL policy on anthem protests. In response to the incidents Thursday night, the NFL issued a statement that “all player and non-player personnel on the field at that time are expected to stand,” Earlier in the year, the NFL announced that all players would be required to stand for the anthem or stay in the locker room. Unfortunately, after criticism from the National Football League Players Association (NFLPA), the league suspended the enactment of the policy. For weeks, league officials have supposedly been working with members of the NFLPA to create an agreement on the issue.

This entire controversy has been exacerbated by the politically correct leadership of the NFL. They are afraid to upset the players but are obviously fine with offending the fans who support the league.

After multiple protests on Thursday night, Colin Kaepernick, the originator of the anthem controversy, tweeted his support for those players who protested “systematic oppression.” He urged the demonstrators to “Stay strong brothers!” Saints Defensive End Cameron Jordan used Twitter to ridicule President Trump for his comments. Jordan tweeted that the President was an “overly insecure prepubescent child…He won’t govern himself, give him a mentor?”

Presumably, the New Orleans Saints coaches and owner Gayle Benson will not reprimand Jordan for his criticism of the President. It was quite a different response from Dallas Cowboys owner Jerry Jones, who declared that his team members will be required to stand for the National Anthem. This position was also supported by NFL legend and Hall of Fame running back Jim Brown, who said “I’ll never kneel, and I will always respect the flag.”

Last year, the anthem protests contributed to the poor ratings and declining revenue for the NFL. Until the league forcefully deals with this issue, the ratings and revenue will continue to suffer as more players decide to disrespect the National Anthem.

There is little doubt about the response of the American people to this controversy. As evidence, the NFL should examine the television ratings for the Hall of Fame game last week. The viewing audience was down significantly from the year below. It should serve as a major wake-up call for the NFL, but not if the league remains beholden to millionaire players instead of the loyal fans who support the league.