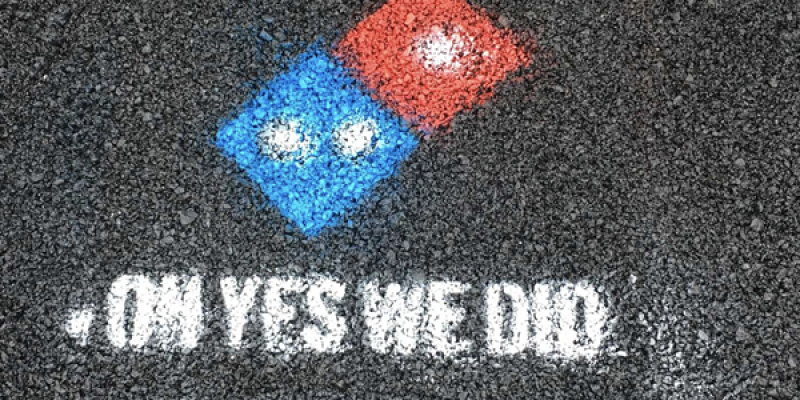 Earlier this year, Domino’s announced a program where they would fix potholes all over the country. Why? Because they want to make sure your pizza arrives intact and undamaged. It also just happens to be good publicity.

Your car isn’t the only thing potholes are ruining.

That’s why Domino’s Pizza has selected New Orleans as a “Paving for Pizza” grant recipient. The company announced that New Orleans is one of 11 cities selected for the $5,000 grant so far.

“Have you ever hit a pothole and instantly cringed?” Russell Weiner, president of Domino’s USA, said in a press release. “We don’t want to lose any great-tasting pizza to a pothole, ruining a wonderful meal.”

So will the repaired potholes really have the Domino’s logo on them?

Have you seen the commercial? It’s really good.

If you read this website for any length of time, you realize that the New Orleans city government is simply unable to provide the basics in making the city livable or safe. New Orleans’s epic pothole problem is just another symptom of that failure of governance.

New Orleans citizens have had to get creative in fixing potholes. Believe it or not, it is illegal for someone other than the city to fill potholes. Violators could face fines of up to $500 per offense.

Nonetheless, it hasn’t stopped one activist from trying to fix the city’s streets. Emma Cool has been fixing potholes illegally and has even collected stories on social media from others.

Start NOLA’s site and social media for Start NOLA, which launched about two weeks ago, have a sardonic sense of humor about the city’s infrastructure. Cool collects stories of would-be pothole cures. There was an attempt to fix a divot in the Bywater with a mixture of quick-drying concrete and Mardi Gras beads (she’s heard reports it didn’t go well), and an account of English artist “Wanksy” who draws male, ahem, genitalia over potholes to force officials to pay attention to them.

Other residents have used Mardi Gras beads alone to fill potholes. Others have planted trees in the potholes and even decorated them for Christmas. One resident was so fed up with potholes on their street he named it General Robert E. Lee.

Domino’s Pizza has revolutionized the fast food industry by more or less inventing pizza delivery. We doubt that even they can tackle the issue of New Orleans’ potholes. But every little bit helps.

Interested in more news from Louisiana? We've got you covered! See More Louisiana News
Previous Article The New Orleans Sewerage & Water Board Is Now Shortchanging Refunds To Customers
Next Article LANDRY: How Louisiana Stood Up To The Anti-Gun Corporate Elite