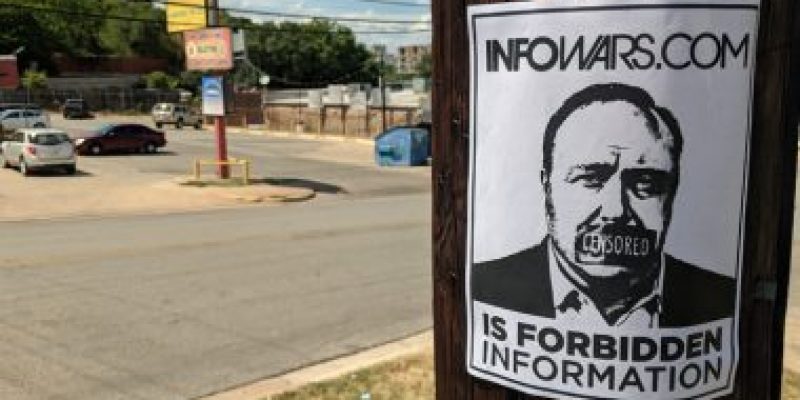 If Americans previously questioned whether Alex Jones was a bit unhinged, the latest events are likely to answer any previous doubt. The man has been deplatformed from Facebook, YouTube, and Apple in a calculated internet scourge. His persona in the past has well emulated a bomb with a fuse cut too short. Such passion is always on the brink of explosion, and these social media giants may have just sparked the fuse.

Jones’ personal platform Infowars declared, “In light of the coordinated blacklisting by big tech monopolies, Infowars is going low-tech and grassroots to circumvent their digital censorship.” Jones has millions of followers across his many online outlets. He has the personality and the power to spark a real cultural movement to combat the growing tech tyranny of America’s online overlords.

Yet, the war on free speech is not even enough to bring conservatives together. Right wing political culture has become infamous for it’s plight of many minds. Supposed conservative Jonathan Last, Editor of the Weekly Standard, recently tweeted, “I’m not even trolling when I say that we need more banning.”

Mr. Last makes a case for the censorship of Alex Jones in an article, suggesting, “All that is happening is that privately owned companies are declining to allow him to use their resources to broadcast his speech.” This is certainly one perspective. Free market principles are the backbone of many respectable political orientations.

Unfortunately, such conviction is often abused when it comes to the game of political chess. For the collective tech giant on the other side of the chess board, this free market position is both well understood and desired. It is strategically advantageous for these social media companies if such ideological foundations prevail in conservative circles. For if this mindset dominates, right wing expression can continue to be snuffed out of the online public square until this grand political voice is reduced to a whisper.

While right-wing infighting ensues, social media outlets continue to censor more political figures and ideas. They started from the fringes, under the guise of “hate speech,” and found little real resistance. Now, these efforts have gone unrebuked for so long that censorship includes shadow banning of elected officials on twitter.

It is a tragedy of Republican dogma that some men, like Editor Jonathan Last, are entirely content to dig their own political grave. For others, being buried in the past with their principles is not paired with the headstone R.I.P. “No arm of government touches this case in any way,” says Mr. Last. Maybe this is a key part of the issue.

Whether or not one sees government intervention as a plausible solution, the power of unifieded public disapproval is a capable force all on it’s own. So when Alex Jones declares war on censorship, this is much more than a self conceited act of personal preservation. He is now an acting symbolic warrior for the sake of American culture and the 1st Amendment to the U.S. Constitution.

Censorship did not start and will not end with Alex Jones. America is on the brink of having half the country labeled as a threat to the future of “democracy.” Donald Trump Jr. recognized this in a recent tweet.

How long before Big Tech and their Democrat friends move to censor and purge @BreitbartNews, @DailyCaller and other conservatives voices from their platforms? https://t.co/sFS7mr8Pco

The culture war is raging forward. As long as conservative ranks remain divided, ground will continue to be ceded to the collective tyrannical movements from the left. If blatant restrictions on the voice of Americans cannot bind patriots together, defeat may already be written in stone.

Interested in more national news? We've got you covered! See More National News
Previous Article HILARIOUS”: Should Maxine Waters be in a nursing home? Or prison? [video]
Next Article Atlanta School: No Pledge of Allegiance in Mornings This Year