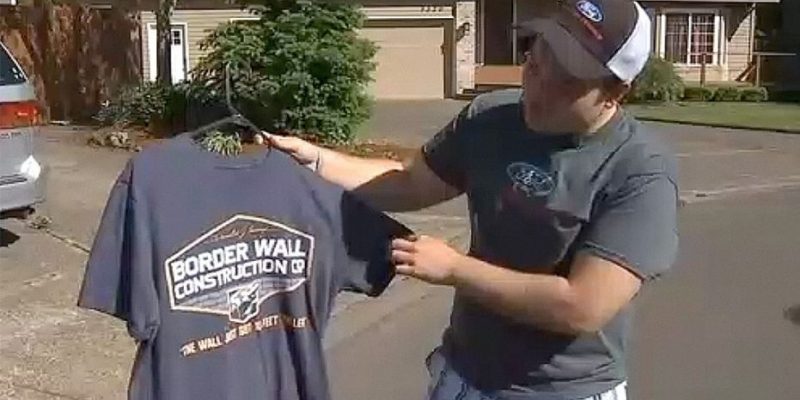 Liberty High School, within the Hillsboro School District, is located in a suburb west of Portland. The settlement requires the district to pay 18-year-old Addison Barnes $25,000 for attorney fees. Greg Timmons, the principal of Liberty High School, which Barnes attended, is also required to write Barnes an apology, USA Today reported.

Last January, Barnes, who was at the time an 18-year-old senior at Liberty High, was suspended for wearing a t-shirt that supports President Trump’s plan to build the border wall– to a class discussion about immigration. The shirt also reads, “The wall just got 10 feet higher.”

According to his lawsuit, which was filed in May, wearing the shirt offended at least one teacher and one student. The assistant principal asked him to cover up the shirt, which he initially did. But then he changed his mind.

“I thought to myself, ‘You know, this isn’t right, this is my First Amendment right to be able to wear this shirt,’” Barnes told KGW 8 News. “So I took off the jacket and the assistant principal had seen that and sent for a security guard to escort me out of class.”

Next, he was given an ultimatum—remove the shirt or leave the school. He left and his departure was marked as a suspension, which was later rescinded.

Barnes argued that the school violated his First Amendment right.

“Everyone knows that if a student wears an anti-Trump shirt to school, the teachers won’t think twice about it,” he said. “But when I wore a pro-Trump shirt, I got suspended. That’s not right.”

But the district told the outlet it responded the way it did to avoid racially motivated tension at the school—where one-third of the students are Latino and some have family members who have been deported.

“Liberty High School administration believed they could reasonably forecast that Mr. Barnes’ shirt might cause other students to feel unsafe and could potentially lead to walkouts, altercations, or other disruptive actions,” the district said in a statement. It said school administrators “acted out of an abundance of caution on behalf of the student body to ensure safety.”

In a statement, Barnes said he brought the lawsuit to “stand up for myself and other students who might be afraid to express their right-of-center views.”

Ironic that there is no freedom to wear a t-shirt in a school named “Liberty.”

Interested in more national news? We've got you covered! See More National News
Previous Article What Every Christian Needs to Know About Islam
Next Article Clinton circumvented law for abortion pill, which has killed 22 women, thousands hospitalized for adverse effects