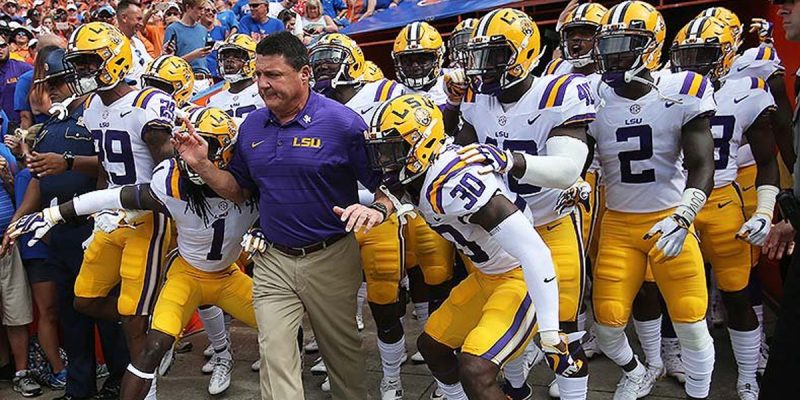 Here’s the final installment of our series previewing the 2018 LSU football season as a SWOT (Strengths, Weaknesses, Opportunities and Threats) analysis. On Tuesday, we covered Strengths, on Wednesday it was Weaknesses, and yesterday was Opportunities.

And now for Threats.

1. We don’t know what’s going to happen next week when the suspensions are announced.

What suspensions, you ask? Well, remember back to this time last year, when shortly before LSU’s season opener against BYU some 13 players were shelved for at least one game for a “violation of team rules” – which in the majority of cases meant a failed drug test. Per the school policy, a first failed drug test in a 12-month period means a one-game suspension and a second means a six-game suspension. The latter hit defensive end Frank Herron, wiping him out of action for the first half of the season – and Herron’s absence was a major factor in a blowout loss to Mississippi State and a disastrous upset by Troy before he was able to come back.

LSU beat BYU fairly convincingly in the opener last year even without those 13 players. This year the Tigers are going against No. 8 Miami, a team surely better than the 4-9 train wreck the Cougars were. So anything even remotely close to 13 suspensions for the tilt against the Hurricanes in Dallas next Sunday will doom Ed Orgeron’s team to a season-opening loss.

LSU will already be without guard Edward Ingram, linebacker Tyler Taylor and wide receiver Drake Davis for their well-publicized brushes with the law. If the “violation of team rules” bug should bite next week and anything more than a couple of bench-warmers fall victim to it – and heaven forbid anybody important to this team should have a second failed drug test – the results could be terrifying.

We know these are college kids, and college kids experiment with cannabis. Still, it’s disheartening to see that at a place like LSU where football is such an obsession and the standards are so high, you still have such a large number of players who would rather smoke weed than win a championship. Here’s hoping Orgeron has taken more control over the program than he had this time last year and the suspensions are at a minimum.

2. The transfers at quarterback aren’t a big deal, but they’re limiting.

Orgeron did what he could to put that off, though, and in so doing he allowed the quarterback competition to be a four-way battle for the first two weeks of camp. But after the first scrimmage, when it became pretty clear that Burrow was going to be the starter, Orgeron and offensive coordinator Steve Ensminger sat the quarterbacks down and gave them an evaluation of where they were in the pecking order. McMillan, who had perhaps nosed ahead of Myles Brennan and Lowell Narcisse in the spring but had not locked the quarterback job down by any stretch, found out he was behind Burrow and Brennan and that was it for him. The reps he got in the first part of fall camp were thus wasted in terms of developing quarterbacks and offensive chemistry. That perhaps couldn’t be helped.

What really hurt, though, was that not only did McMillan leave but so did Narcisse, who’ll be playing at Mississippi Gulf Coast Junior College this season. And while Narcisse was also behind Burrow and Brennan, the coaches were planning on using him as a short-yardage and goal-line specialist to run some zone read and option packages. When he left, those went more or less out the window – LSU doesn’t have a quarterback who can specialize in running them, and would have to convert someone from another position to take that package over.

Worse, even though Burrow can certainly run the ball effectively he can’t really do any of those things either. Because now that LSU is down to just two scholarship quarterbacks Orgeron and Ensminger can’t afford to get Burrow hurt. So his running is going to have to be limited to scrambles to avoid the rush.

The plan for Brennan, had things worked out the way the coaches wanted, was to get him live action in four games this year under the NCAA’s new redshirt rule and then use that redshirt on him. This, for two reasons – first, Brennnan is listed on LSU’s roster at 6-5 and 183 pounds, which is alarmingly skinny for an SEC quarterback. How somebody in South Louisiana can’t gain weight despite actively trying is a question for the ages, but Brennan is going to need more time for his body to fill out. And second, a redshirt year would put Brennan two years behind Burrow, which would put him in line to start in 2020 and 2021 after Burrow exhausts his eligibility.

It still might be possible to redshirt Brennan – but doing that depends completely on Burrow staying healthy, and that means this offense won’t have any option, zone reads or bootlegs to it for fear of getting the starter hurt. Had Narcisse stuck around, none of this would be much of a problem.

LSU has other quarterbacks. They’re walkons. One of them, sophomore Andre Sale, started about half the season at FCS Tennessee Tech last year; he put up so-so numbers on a terrible team, but his film isn’t horrible at watch. The NCAA gave Sale a waiver so he’d be eligible this year, and he’s the third string quarterback. The other three are true freshmen who aren’t going to play this year, but having said that Jordan Loving, A.J. Aycock and Alex Aucoin really don’t look all that bad for walkons. They’re just not good enough to risk Burrow getting hurt.

3. Steve Ensminger’s offense is going to have to pull its weight early in the season.

This isn’t fair, we know, but here’s the major problem for Orgeron going into the season – LSU opens with Miami, and then plays at Auburn in Week 3, at Florida Week 6 and Georgia at home Week 7. Those are going to be difficult games and the Tigers are going to have to win probably half of them or else the fans will be restive; maybe even more restive than they were last year when LSU struggled out of the gate.

Orgeron can’t have that. He has to put the naysayers to bed this year, and gain a firm handle on his program. If he’s 3-4 or 4-3 after seven games, that won’t be possible. It might even be that if he’s within a game of .500 at that point in the season Joe Alleva, the athletic director who hired Orgeron whose own job was the subject of lots of offseason rumors, could fall victim to the ax. And Alleva’s replacement is going to be looking at Orgeron as the top item to address.

It seems quite apparent, and we’ve done what we can this week to convey it, that LSU’s defense is plenty good enough to win in every game – including those four in the first seven. It would be a surprise to see the Tigers get blown out in any of them. But what we don’t know is whether the offense will be good enough to win against those opponents. After all, your offensive line is suspect and so are your running backs, you have two true freshmen (albeit the fact they’re five-star recruits) among your top four wide receivers and your quarterback only arrived in June and has never started a college game – and should he get hurt the season might immediately become a nightmare. Furthermore, your offensive coordinator hasn’t had that job on a full-time basis since he was fired at Clemson in 1998, and when he was hired after Matt Canada was let go the general fan reaction was one of groaning.

Frankly, we’re optimistic things will work out and the offense will be a pleasant surprise. We think Burrow will be the best quarterback LSU has had since Matt Flynn led the Tigers to the 2007 national title, and what we’ve heard and seen of Ensminger’s offense seems to us to be what LSU should have been running for the last decade. For all the holes in his resume, Ensminger definitely has lots of defenders among coaches who know what they’re talking about who say he’s an outstanding X’s and O’s man. And the reports from the practice field indicating the offense has gotten killed daily might well just be a function of how good that defense really is. If nothing else, getting the ball to Jonathan Giles alone should be enough to make this an interesting offense.

But if LSU can’t move the ball against Miami and Auburn and loses both games, and things don’t get better against Louisiana Tech, Ole Miss, Florida and Georgia, the fans are going to turn on Orgeron and a negative vibe is going to pervade Baton Rouge. Somehow that has to be avoided starting a week from Sunday.

Interested in more news from Louisiana? We've got you covered! See More Louisiana News
Previous Article SCHMIDT: The Voting Machine Bid-Rigging Accusations Color The Secretary Of State Race
Next Article The New ‘Freedom In The 50 States’ Survey Is Out. Where Does Louisiana Rank?