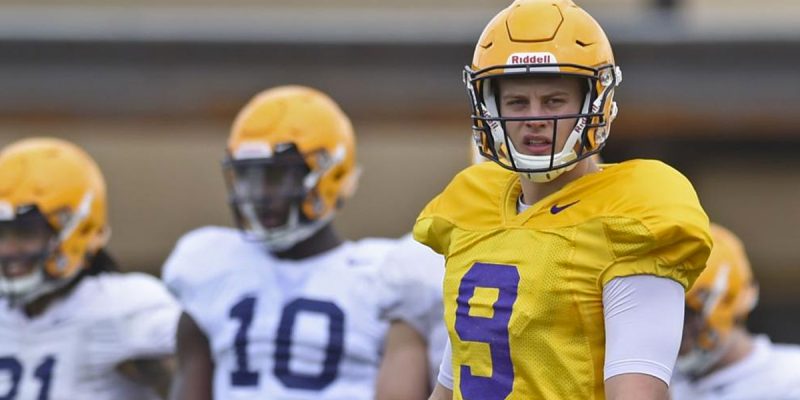 This is the third in a four-post series this week previewing the 2018 LSU football season by way of a SWOT (Strengths, Weaknesses, Opportunities and Threats) analysis. On Tuesday we debuted the series with Strengths and yesterday came the post on Weaknesses.

So today’s the day for Opportunities, and here goes…

1. Joe Burrow’s arrival gives LSU a chance to be a quality passing offense for the first time since 2013.

Burrow, a redshirt junior who narrowly missed out on the starting job at Ohio State this spring and chose to transfer after he graduated from there, is a potential game-changer for an LSU offense which has been embarrassingly incompetent throwing the football for most of this decade. From 2014 to 2017, the Tigers averaged more than 200 yards per game passing only once (203 yards per game last year, good enough for 84th-best out of 130 FBS teams), and in 2013 LSU’s passing offense hit its high-water mark with 251 yards per game. That placed the Tigers 46th out of 128 FCS teams that year.

And to get 251 passing yards per game LSU had to have a quarterback in Zach Mettenberger who at least had a cup of coffee in the NFL throwing to arguably the two most productive receivers in the league in Odell Beckham, Jr. and Jarvis Landry. With that array of talent LSU was 46th in the country in passing offense.

Given that the passing game has ruled college football for the last 15 years, it’s quite shocking how behind the times this program is.

But head coach Ed Orgeron and offensive coordinator Steve Ensminger have sworn to join the 21st century, and by all indications LSU will look like the rest of college football this year with a spread offense. Having a legitimate quarterback who can operate one could well make this a sleeper team on the national stage. LSU has always had a tough defense and the running game has always been good (though as we noted yesterday it looks like a weakness this year); if you have somebody capable of throwing accurately you might just be better than #25 in the country as the preseason poll suggests.

2. Even without Kristian Fulton being available we really like LSU at cornerback.

As good as the Tiger defense was last year, the fact was that the play of the secondary wasn’t anything to write home about. Two of the three cornerbacks who saw most of the action, Kevin Tolliver and Donte Jackson, turned pro after having so-so seasons – Jackson parlayed a terrific NFL combine into a second-round selection by Carolina, and it’s true that The Sporting News named him a second-team All-American last year, but the reality was Jackson dropped entirely too many interceptions and it was Jackson who was beaten by Notre Dame’s Miles Boykin for the game-winning touchdown in the Citrus Bowl. As for Tolliver, he wasn’t even drafted following a season in which he essentially lost his starting job to Freshman All-American Greedy Williams.

But with Jackson and Tolliver leaving, heading into spring practice there was consternation that unless the NCAA would allow Kristian Fulton to avoid the second year of his suspension for attempting to cheat on a drug test (for performance-enhancing drugs Fulton wasn’t even using, as an indication of just how stupid the whole mess was), LSU wouldn’t have a stud cornerback to pair with Williams. On National Signing Day, when Orgeron was left at the altar by high school phenom Patrick Surtain, the corner opposite Williams started to look like a problem.

But even with Fulton’s appeal being turned down, things are looking up at that spot. Freshman Kelvin Joseph, we’re hearing, is really, really good – he pairs Williams’ excellent ball skills with a next-level physical presence, and Joseph is beginning to look like a strong possibility to win the second cornerback job. But not without competition, because senior transfer Terrance Alexander, a John Curtis product who comes to LSU after graduating from Stanford, where he was a part-time starter before missing most of his junior year with an injury, and sophomore speedster Kary Vincent are both top-quality players as well. Add a pair of capable backups in sophomores Jontre Kirklin and Mannie Netherly, and there is a little bit of depth at a position thought to be a problem area.

LSU has a chance to put two or three quality cornerbacks on the field this year and, combined with what should be better safety play as Grant Delpit possibly puts together a breakout sophomore season and senior John Battle shakes off the injury-plagued season he had last year, LSU’s secondary might be capable of creating a lot more turnovers than they’ve done the past two years.

UPDATE: No sooner did we publish this post but the NCAA reversed its decision and reinstated Fulton for this year. That is, of course, a huge development – Fulton is seen by players and coaches alike as LSU’s best cornerback and he should nail down that spot opposite Williams. Which would mean LSU has gone from having one cornerback with whom defensive backs coach Corey Raymond was comfortable with heading into spring practice, to now having five. That presents the opportunity to put a hell of a defense on the field this fall.

3. The kickers are so much better this year, it could actually make the difference in more than one game.

Let’s face it, the kicking game was an Achilles heel for LSU in 2017. Two of the team’s four losses can be directly traced to poor play by the kickers. The loss to Troy in September, which nearly sent the entire program into a tailspin, was the product of a terrible effort by everybody in the building, to be sure, but it was a missed 35-yard field goal attempt in the second quarter of that game which set the tone. LSU was playing from behind all game long, and increasingly desperate as a result. The fact that the missed field goal was the difference in a 24-21 loss can’t be overlooked.

And the 21-17 Citrus Bowl loss to Notre Dame came thanks to two missed field goals of 22 and 37 yards by two different kickers.

In all, LSU was just 16 of 27 kicking field goals last year, and that inefficiency was arguably the difference between the 9-4 record LSU posted and the 11-2 mark the Tigers probably should have had.

So to Orgeron’s credit, he went out and signed senior transfer Cole Tracy, who was 27 of 29 kicking field goals in an All-American year at Division II Assumption College in Massachusetts. There are people who will tell you Tracy is the best kicker in college football this year, though we’ll see if his leg holds up against the pressure of 100,000 fans in the stands. But since his arrival on LSU’s campus, the reports have been nothing short of glowing with respect to his consistency, accuracy and the strength of his leg. We’re told he’s virtually automatic out to 55 yards. If that holds up it’s a big deal, especially if LSU’s running game isn’t able to punch the ball in at the goal line. If you’ve got a sure thing as a field goal kicker you can take on a little more risk throwing the ball in the red zone, and that makes Tracy fairly valuable.

But that’s not all. After three years of watching Cameron Gamble spray kickoffs more or less everywhere but the back of the end zone, Orgeron brought in preferred walkon Avery Atkins to take over that job, and Atkins’ kickoffs in camp have regularly gone beyond the end line. LSU’s kickoff coverage has been spotty at times, but with Atkins it might become far less of an issue this year.