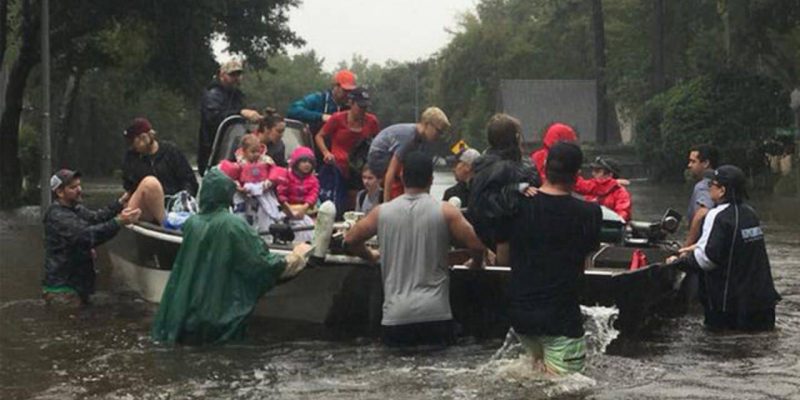 Gov. Abbott posted a timeline today commemorating the incredible effort made by state and local governments, individuals, relief groups, and others, to help in the aftermath of the greatest flooding event in U.S. history. 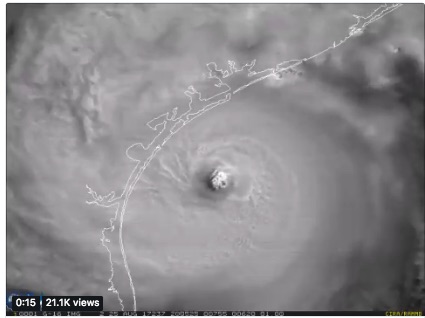 One year ago, #Hurricane Harvey's relentless, record-setting rains produced historic flooding in Houston and Southeast Texas. Here's a view of the storm from #GOES16 before it made landfall on August 25, 2017. More: https://t.co/ml0nmVCBa3 pic.twitter.com/Cv4pEFslFg

One year ago today, Hurricane Harvey made landfall in Rockport, Texas as a Cat. 4. More than $125 billion worth of damage was caused and 1/3 of Houston’s population was displaced. Out of that came the city’s strength and ‘coming together’ spirit. 💪🏽 pic.twitter.com/6sk0WLslMZ

Hurricane Harvey touched down in the Houston area, pouring down rain for four days and nights straight.

Dark skies, constant thunder and lightening, it threatened nearly 50,000 square miles of Texas land and more than 8.8 million residents. It broke records for rainfall, flooding, and other records that the state and federal government have tracked for more than 100 years.

Harvey threatened nearly 50,000 square miles of Texas & more than 8.8 million Texans in the region. In total, 60 counties were to be included in the State Disaster Declaration & 53 counties in the Presidential Disaster Declaration. 08/25/17 https://t.co/azoeMWoVG9 pic.twitter.com/f7PLnEMltg

It generated one of the largest relief efforts in history.

Just read that @JJWatt Hurricane Harvey relief efforts are “the largest crowdsourced fundraiser in world history”. $41.6 mil- built over 600 homes and 420 childcare centers, and distributed 26 million meals. It’s hard to even wrap your brain around that. That’s beyond impressive 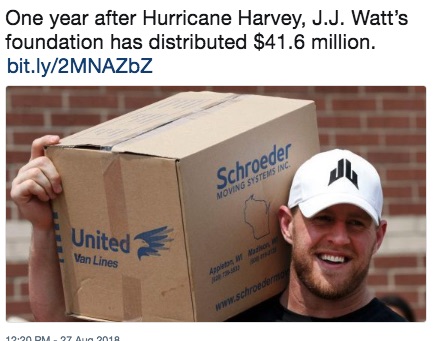 Other groups shared people’s stories in “10,000 words” about surviving the greatest flooding event in U.S. history. 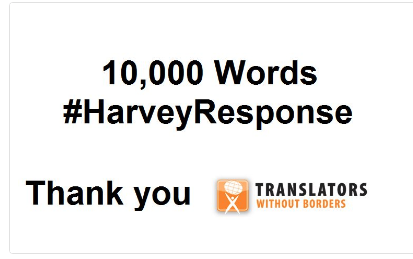 “It felt like we were in a war zone,” survivors said.

Kingwood wasn’t initially flooded when the rain from Hurricane Harvey started coming down. But after the San Jacinto River Authority made the decision to open the floodgates at Lake Conroe — a wave of water traveling at 80,000-cubic-feet-per-second poured into the community, according to KPRC.

News organizations are posting the most telling photos from one year ago: 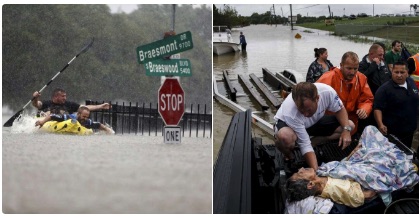 Many animals and pets were displaced too. Rescue efforts were underway to save them.

Looking back, people tell their stories:

When Hurricane Harvey left Houston there was one thing it didn't destroy — compassion. Thanks to the help of more than 120 animal welfare groups and 2,800 volunteers, nearly 3,000 cats and dogs were rescued. Take a look back at the relief efforts: https://t.co/5CEDRDsvrK. #2025 pic.twitter.com/UPS2ifQvEJ

Thanks to everyone for helping keep #HoustonStrong:

"I think I speak for all of Houston when I say thank you to the whole world for supporting and backing us during such a difficult time."@JJWatt on Hurricane Harvey, the $41.6 million raised, the progress to date and what's to come. pic.twitter.com/G5gEDKZAnj

“One thing Harvey could not destroy is the spirit of Texas,” Gov. Abbott said.

One thing Hurricane Harvey could not destroy was the spirit of Texans, and that is truly inspiring. Thanks to the city of Rockport for their resiliency, selflessness, and inspiring perseverance. https://t.co/NDoqBGg7Jg pic.twitter.com/j79LMgZkKB