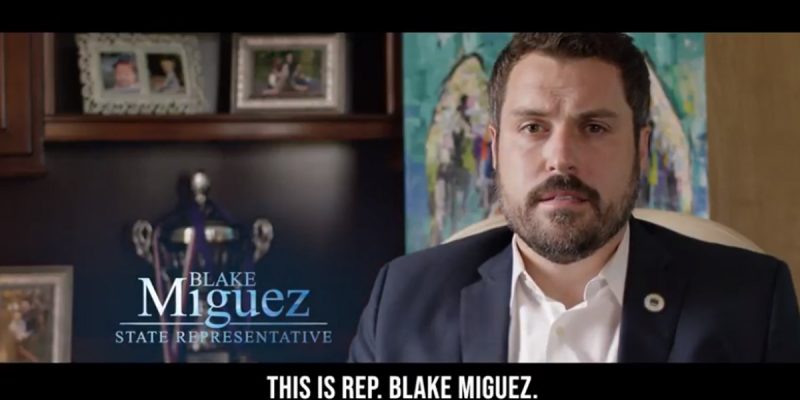 This might seem a little out of the way, seeing as though it’s just a promo video coming out of a story which was a relatively minor blip earlier this month. But since it’s late August and we’re literally in a dead period politically, and since we see this as prelude to things which could well become significant later, we’re going to discuss the video state representative Blake Miguez’ budding political operation put together yesterday.

As our readers know, Miguez was one of the ringleaders among the conservatives on the Louisiana Bond Commission who successfully voted to bar Bank of America and Citigroup from participating in financing the state’s bonded debt in the future, so long as those two Wall Street banks continue to implement policies discriminating against gun owners and gun sellers. B of A and Citigroup earlier this year announced a series of virtue-signaling dictates along those lines. Citigroup won’t do business with retailers selling firearms to customers under the age of 21, with the exception of those who have passed gun or hunter safety courses or are in the military or law enforcement. And Bank of America won’t do business with retailers and manufacturers that sell “military-style weapons” like AR-15’s – despite the fact the AR-15 platform is the most popular rifle in America, and despite the fact no military on the planet uses an AR-15 as a service weapon.

Those two banks promulgated those policies so as to make the New York and Washington pressrooms happy and to gain positive press from the social justice warriors who increasingly populate the financial media. More often than not, pandering to the left from the corporate boardroom is an easy and consequence-free action; it’s usually lefty activists who engineer boycotts of Chik-Fil-A and Hobby Lobby, rather than the folks on the right. But the Bond Commission’s vote two weeks ago was significant in that it represents a $600 million slap of the glove across the face of two institutions representing about a quarter of the public finance market, and that’s a potential game-changer – especially if other states follow suit, which hasn’t yet happened.

Which is the first reason why Miguez’ new video might be significant. Getting the word out about what the Bond Commission did might generate a few copycats out there.

Before we get into the others, let’s show you the video…

Reason Two why this thing could be potentially significant is what it might mean for Miguez. Our readers know he’s on the roster as a speaker for our event Sept. 12 in Lake Charles, and that’s one of a number of engagements he’s putting together around the state. Miguez is also doing business with some of the most high-profile political consultants in Louisiana – this video was put together by LR3 Consulting, which is Lionel Rainey’s shop, and he’s also worked with Jason Hebert and Scott Hobbs at The Political Firm.

Don’t be surprised to see Miguez begin taking a much more prominent role as a conservative standard-bearer as the 2019 statewide election cycle begins. He’s the most prominent detractor of Lt. Governor Billy Nungesser’s, as Miguez tore into Nungesser for his accomodationist appearances as a Republican pal of Gov John Bel Edwards’ tax increase proposals, and Miguez was one of the ringleaders among the tax opponents during this year’s special sessions. It’s expected he might build on that to do one of two things – either going around the state assisting conservative candidates for the state legislature, something which isn’t often done in Louisiana, at least in recent years (especially since Bobby Jindal made a practice of declining to stump for candidates in legislative and congressional races), or maybe even running against Nungesser himself, which he’s said he would do if nobody else does.

If it’s the former, it might be good for Miguez’ ambitions if he wants to run for House Speaker in January 2020. As of right now there is no particular frontrunner for that position, which will be vacant thanks to Taylor Barras being term-limited. At one point it was thought Stuart Bishop (R-Lafayette) had an inside track on the job but insiders tell us he’s falling from favor. Sherman Mack (R-Denham Springs) is another possibility, but Mack is a personal injury lawyer who appears on a billboard on I-12 and that might not be the look a Republican-majority House will want. Miguez is only a freshman at present, so were he to successfully challenge Bishop, Mack and whoever else would be in the running he’d be at a seniority disadvantage. But he would also be in a position to serve for eight years as House Speaker, and that might be quite attractive to a new Republican governor looking for two terms of continuity within the legislative leadership. For that to work, though, Miguez would need to be a prominent figure among the huge freshman class (thanks to term limits) in the House in 2020, and to get a lion’s share of their votes.

Finally, the 30,000-foot view on this. There is a lively debate going on among Louisiana conservatives as to how the Republican Party ought to present itself in next year’s elections – some of this coming from the rocky beginning of the implementation of the criminal justice reform package passed with bipartisan support last year. There are lots of Republican and conservative policy operators – including our friends at LABI and the Pelican Institute, for example – who are supportive of the criminal justice reforms (or perhaps better put were supportive of the package which passed) and are also insistent on moving Louisiana toward real change in areas like occupational licensing, tax reform, pension reform, tort reform, undedicating state revenue and other crucial policy areas. The policy crowd wants Louisiana to have a real debate on those issues in 2019, and to elect people committed to reforming what is clearly a dysfunctional state government apparatus.

On the other side of that debate are the Republican political consultants, who say that you can’t win elections with that stuff no matter how badly it’s needed. They say Louisiana’s voters don’t really believe any of those reforms will work, and each one of those reforms will antagonize a special interest willing to spend millions of dollars on a scorched-earth campaign to annihilate anyone who brings them forward. Run on tort reform, which polls say 70 percent of Louisianans are for, and watch the trial lawyers come out with millions of dollars in TV spots burying you on something that has nothing to do with tort reform (which is precisely what happened to David Vitter in 2015). Run on occupational licensing reform and the unions and entrenched incumbents – plumbers, florists, river pilots, whoever – will likewise attack.

What you can win elections on, they say, is God and guns and abortion. Those issues enjoy virtually unanimous support in Louisiana, and voters use them as stand-ins for conservative positions on more policy-oriented items. You can win on that stuff – which is why you see John Kennedy and Jeff Landry so often making public statements on cultural issues like those rather than the policy nuts and bolts where Louisiana is concerned.

But here’s the problem – while voters might see God and guns as a stand-in for a full-spectrum conservative position, it doesn’t often work out that way. A John Milkovich, whose LABI score this year was a pitiful 42 percent, gets elected as a Democrat despite serving a Senate district which is conservative (it went 57 percent for Trump and 60 percent for Kennedy in 2016) because he speaks incessantly about God and guns. John Bel Edwards himself did the same thing, and despite an unquestionably left-wing record as Louisiana’s governor – just look at the size of the state budget – he’s still talked about as a “conservative” Democrat.

What a Miguez brings to the table is that he can sell the cultural piece on Election Day while delivering the policy reform piece while the legislature is in session. And how to square the circle, if you’re LABI and you’re going to have a large war chest for legislative races next year you’d like to spend on people who will stand up for tort reform, tax reform and even a new state constitution, is to find people like Miguez who can sell you on their dedication to the policy reform agenda while then selling the state’s voters on the cultural stuff which wins elections.

Miguez is showing he can do that. The utility of this video is that it might serve as a pathway for others to do the same thing. Because the 2019 cycle is just around the corner and candidate recruitment is very much underway.

Interested in more national news? We've got you covered! See More National News
Previous Article Republican Will Hurd, Representing A District That Includes 1/3 Of The U.S.-Mexico Border, Doesn’t Want A Border Wall
Next Article A Reminder on why John McCain was never a war hero, but a criminal [audio, video]