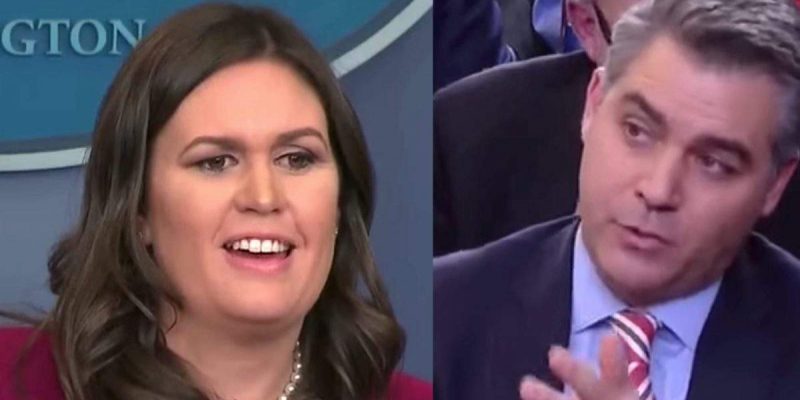 A real news organization would have become embarrassed by Jim Acosta and fired him, or at least removed him from the White House beat, a long time before his current spate of disgraceful and unprofessional trolling began. CNN, who does employ some talented people, is nevertheless not a real news organization. It is more or less a Democrat Party propaganda shop, and its constant promotion of Acosta, who is known solely at this point for his poor attempts at Sascha Baron Cohen-style harangues against officials of the Trump administration, only furthers the argument of the president that it represents Fake News.

At issue today is some overheated rhetoric by President Trump that “the media” is the enemy of the people. That’s not as well-constructed a statement as it could be, of course, and we can all agree that it would be better if no one believed the president’s statement to be true.

The problem is that by any objective judgement Trump’s statement can’t be dismissed as false. How would the media be the enemy of the American people? Well, if media reports conveyed information which is patently inaccurate, in such a way as to promote a specific agenda or to suppress an agenda, that might cast doubt on the media as an asset to society. If the media were engaged, with malicious intent, on stoking outrage and division in order to tear at shared culture and commonly agreed upon principles and realities, that would go further.

And one could make a quite sound argument that major media organs such as CNN, the New York Times, the Washington Post and others have been doing precisely that for years. One might argue this problem has existed, and has been growing, since Walter Cronkite went on national television and pronounced the Vietnam War lost when militarily that was demonstrably not a fact.

To assess the truth of Trump’s claim fully is not to give it credit on a word-for-word basis. Jim Acosta is not Benedict Arnold or Julius Rosenberg. Rather, he’s a partisan propagandist who’s terrible at his job and shouldn’t be paid to do it by CNN. But anyone who has seen the 90-plus percent negative coverage the Trump administration has endured, the laughably, unspeakably slanted reports on things like Russian collusion and the supposed children’s crisis at the border, the recent attempts at destroying Supreme Court nominee Brett Kavanaugh by going after his wife, and so on, can’t be asked to totally dismiss Trump’s rhetoric. The legacy media is without question Trump’s enemy – they declare themselves to be his enemy every day without fail. And by extension they would be the enemy of the scores of millions of Americans who voted for and/or support the president.

In other words, it’s overheated rhetoric which isn’t worth stroking out over. And yet that’s precisely what Acosta, who has anointed himself The Avenger of the White House press corps, has proceeded to do – first stoking the derision of the crowds at pro-Trump rallies and then acting as though it’s Kristallnacht when those rallygoers heckle him in return, and now seizing on Trump’s “enemies” statement to immolate himself atop a pyre of sanctimony.

Here’s the video of him demanding Trump’s spokeswoman Sarah Sanders disclaim the president’s “enemies” statement, and her having none of that…

“I walked out of the end of that briefing because I am totally saddened by what just happened. Sarah Sanders was repeatedly given a chance to say the press is not the enemy and she wouldn’t do it. Shameful.”

CNN's @Acosta on contentious WH press conference: "Honestly Brooke, I'm tired of this …. It is not right, it is not fair, it is not just, it is un-American to come out here and call the press the enemy of the people"https://t.co/1oGZa7f57j pic.twitter.com/sqEkOE89SM

All of this does little to nothing to solve the problem for CNN and the other legacy media organs, which are losing their audiences and, increasingly, their credibility with half the country. Acosta’s partisanship and grandstanding might make him a hero of the American left, but if he wants to be taken seriously as a journalist he’s clearly doing it wrong. So is his employer and so is the media as a whole.

He’s making Trump’s point for him and he isn’t even aware of that fact.