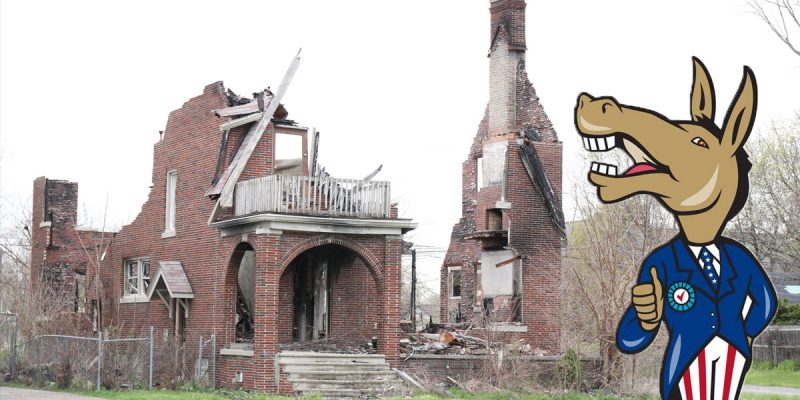 While correlation does not always imply causation, it begs the question, nevertheless: Why are the vast majority of the most powerless and impoverished citizens concentrated in cities run almost exclusively by Democrats? I mean, why is it that 80% of the FBI’s “Top 10” most violent cities – the real urban disaster areas in the country – are those run by Democrat mayors and city councils?

Or that 90 percent of the poorest cities are run by Democrats? Or that 90 percent of the cities in the U.S. with the highest unemployment are run by Democrats? Or that Democrats are more likely to be involved in scandals regarding extramarital affairs, or scandalous affairs, otherwise? Whether all this is a result of ineffective policies, bad luck, or a genuine disinterest in the welfare of anyone else (other than themselves and their cronies), it still remains unclear. What is clear is governance in all too many American cities is a disaster, and one party is overwhelmingly in charge.

Statistically, Democrat-led cities outnumber those Republican-led ones by a ratio of 3 to 1, when looking at the 100 largest cities in our nation. And in all fairness, any Democrat missteps or misdeeds in office would obviously make headlines 3 times as much as it would for Republicans (just based on the numbers).

But why are there so many Democrat-led cities, especially when there is generally more parity in the number of Democrats and Republicans serving in Congress? And again, why the high correlation between Democrat-led cities with the highest rates of poverty, violence, and scandal?

It could be just the number of registered Democrat voters outnumber Republican voters by 40% nationally, and with local turnout generally so low, a Republican (or “No Party”) candidate just has the odds of stacked against them, from the beginning. This is magnified here at home.

In Shreveport, for example, the number of registered Democrat voters is more than double the number of registered Republicans voters. With those numbers, many would say a Republican candidate (city-wide) doesn’t even have a chance at winning. And therein may lie the answer to our question of why there’s so many Democrat mayors and city councils across the country that have presided over the economic and social decline of so many, once-thriving, American cities (like Shreveport).

You see, there are many voters who may simply be reluctant to “throw their vote away” on a “longshot” Republican or No Party candidate, and instead look only for the “D” behind someone’s name, instead of their qualifications, and then pull the lever.

Whether that is the answer or not, what you end up with is single-party politics at City Hall, and that is not so good for representing so many competing interests in our city. The checks and balances we have, as part of the elections process, only work when there are competing political parties, and with twice as many of us registering as “no party” voters in Louisiana, than Democrat or Republican combined, the checks and balances system has, in fact, become “un-checked and un-balanced.”

The result is larger and larger Democrat majorities in the cities they run, and the numbers on poverty, crime, and corruption, across the country, tell the tale.

And unless voters hold elected officials accountable on election day (by actually showing up to the polls), the incumbents become less and less responsive to the voters, and as time marches on, they are more likely to be re-elected, and less likely to be removed, whether by the voters or prosecutors, or their own resignation.

By the time they do get removed, though, or even investigated, it’s almost always too late. Remember New Orleans Mayor Ray Nagin who was convicted on corruption charges for accepting bribes, free trips and other gratuities from contractors right after Hurricane Katrina? Or the mayor of Birmingham, Alabama who was convicted of accepting bribes in exchange for giving millions in sewer-bond business to a friend. Then there’s Nashville’s mayor who recently resigned amid a sex scandal involving her former head of security.

Up in Allentown, Pennsylvania, the entrenched one-party politics was so bad that the mayor was re-elected to a fourth term, even after being indicted on 47 charges of trading contributions to his campaigns for favorable treatment to donors getting work from the city.

Besides malfeasance in office, and dishonesty, what these mayors all have in common is that they have a “D” behind their name, and from the conviction rate and the indictments, there’s not much else worth noting. Of course, voters in those cities above probably didn’t think, at the time, they were “throwing their vote away” on those (soon to be) corrupted officials. They thought they were making it count by voting for who they thought would win (but that’s not the same as the best candidate for the job). In reality, they were throwing away more than a vote – it’s the future of their community.

And no, this isn’t about tearing down one political party, or uplifting another (although it sure sounds like it). It’s just worth noting the remarkable correlation of Democrat-led cities with increased poverty, violent crime, and unmitigated corruption – and understanding the psychology of why voters keep voting for the same “brand” of candidate – because they didn’t want to “throw away” their vote – even after years and years of having nothing to show for it.

Either voters a) don’t realize the consequences, b) their “give-a-damn” is broken, or c) it’s both. While this may mean we’re getting the government we deserve, this disaster is definitely not the government any of us need – no matter what letter you put behind your name.