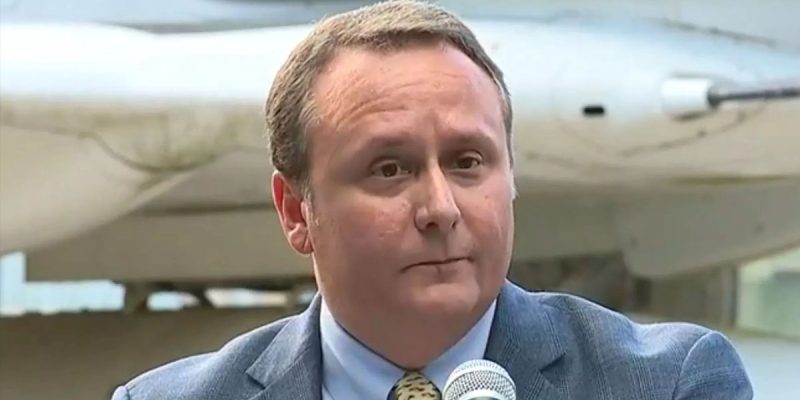 In case you haven’t heard, yesterday Kenner mayor Ben Zahn, who made himself a national figure for having sent out a memorandum imposing a ban on Nike products at that city’s playgrounds and other venues and setting off a blistering reaction from Democrats and the black community in New Orleans, announced he was backing down from his stance.

Kenner mayor Ben Zahn has reversed his ban on the purchase of Nike products.

“Acting upon advice from the city attorney, I have rescinded my memorandum of September 5, 2018,” Zahn said at an afternoon press conference. “That memorandum divided our city, and placed Kenner in a false, unflattering light on a national stage.”

Zahn sent out the controversial memo on September 5 with a directive banning all booster clubs from purchasing Nike products, a day after Nike made headlines by introducing Colin Kaepernick as one of the faces of its “Just Do It” 30th anniversary ad campaign.

Zahn said his overwhelming sense of patriotism was behind his decision, something he said he refuses to apologize for.

“I am passionate about my country and the brave men and women who put themselves on the front line every day,” he said. “In the name of protecting us all, members of the armed forces, our fire departments, our police departments, actually sacrificed everything – their very lives. It is because of those sacrifices that my patriotism will not waver, but my focus needs to be on the city of Kenner and the many great projects we have in store for our city. Nothing can be allowed to distract us from that very important endeavor.”

Hours before Zahn’s announcement of the reversal of the ban, the ACLU of Louisiana issued a statement calling the ban unconstitutional.

“We’re pleased the mayor reconsidered his divisive stance and rescinded this unconstitutional policy,” ACLU of Louisiana executive director Alanah Odoms Hebert said. “The reversal of this ban is good news for the people of Kenner and all Louisianans, who have a constitutional right to express their political views free from government censorship or discrimination. Officials across the state should remember: they took an oath to serve all their constituents, regardless of what brand they wear or what political views they hold.”

As we said earlier in the week, the ban was a dumb idea because it went too far. Had Zahn put out a statement castigating Nike for taking Colin Kaepernick on as a product spokesman and aligning itself with the fraudulent and violent Black Lives Matter movement, and then saying he wouldn’t allow the city of Kenner to spend any public dollars on Nike products as a result, he would have been on solid ground. Where he went wrong was to try to tell booster clubs at the city’s playgrounds what gear they could buy – that’s why the ACLU went after him, and while the ACLU is at least semi-discredited for their newly selective defense of the First Amendment they’re correct in this case.

But reversing the ban isn’t going to work at this point, because Zahn now appears radioactive…

On Wednesday, Zahn said rumors that businesses and developers had threatened to leave the city because of the controversy were not true. He added that it was simply his love for the “country and the brave men and women who put themselves on the front line every day” that led him to create the policy.

Jill Johnson, a lifelong Kenner resident, attended the press conference with her brother and two others, toting a sign calling for Zahn to step down.

Johnson said any positive impact from Zahn’s decision to rescind the policy was tempered by the fact that he seemed to have done so because he got boxed in, legally and politically.

“I was always told, the first thing a person speaks is how they truly feel,” she said. “So what he said (Wednesday) is not going to change the hurt, the anger or anything within the residents of Kenner.”

Johnson said she feels the expressions of patriotism often used to counter the protests started by Kaepernick miss the point and often aren’t necessarily about supporting the troops.

She thinks the damage extends beyond Kenner.

“Right now, friends out of town think we’re a joke and we have a racist mayor,” she said.

We’re also told that Zahn and Jefferson Parish President Mike Yenni (who certainly has his own problems), once allies, are now at each other’s throats, and moreover the Kenner City Council is completely swearing him off; they won’t even appear in public with him anymore.

All of which is (1) mind-numbingly stupid, and (2) evidence of something quite perplexing, which is that somehow Nike is now the symbol of black identity, at least in New Orleans, and to criticize Nike now becomes a racial thing. That seems like a rather significant leap to us, but that’s where we are.

Zahn probably should have had a better idea what he was doing before inserting himself into this meatgrinder, but one sympathizes with his amazement at how ugly things have gotten so fast.

All over a marketing campaign by a sneaker company. Good grief.