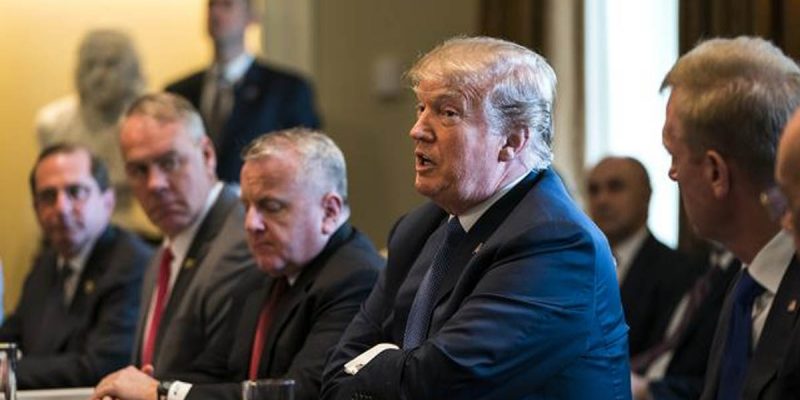 President Trump, it has been a rough few weeks. The “Deep State” has literally thrown everything including the kitchen sink at you, but, thankfully, you are still standing.

First it was the betrayal from a woman who you made into a reality TV star, Omarosa Manigault Newman. Then it was the dual blow of the Michael Cohen guilty plea and allegations that you directed him to supposedly make illegal payments to women alleging affairs. Simultaneously, your former campaign manager Paul Manafort was found guilty on eight counts and might face the prospect of spending the rest of his life in prison.

Last weekend, the nation was subjected to continuous coverage of the funeral of U.S. Senator John McCain (R-AZ) and the eulogists who inappropriately used the spotlight to condemn you. This was coupled with a heaping dose of media bashing of your presidency and unflattering comparisons to McCain, their new nominee for sainthood.

This week, there was the hyperventilating media promotion of the Bob Woodward book Fear about your administration and the frequent use of anonymous sources to disparage you. It was immediately followed by the New York Times anonymous editorial purportedly written by a senior administration official which led some of your political enemies such as U.S. Senator Elizabeth Warren (D-MA) to ludicrously recommend your removal by use of the 25th amendment.

Undoubtedly, your many political opponents want to drive you from office and invalidate an Electoral College landslide and the votes of 63 million Americans. They will use impeachment, a Special Counsel investigation or the absurdity of invoking the 25th amendment to separate you from the office who are holding.

As you know, they hate you personally, your agenda and your base, the “deplorables.” While you have done incredibly well over the last 19 months, I am taking this opportunity to offer some suggestions to deal with this unprecedented political threat and the uncontrollable level of hatred that you are facing.

With two months until the crucial mid-term elections, it is imperative that these ideas be followed, otherwise we risk the horror of the Democrats taking control of the U.S. Congress and completely sidetracking your powerful plan to “Make America Great Again.”

Here is my “Top Ten To-Do List” to navigate the chaotic environment you face:

1)    Declassify. Turn the tables on your enemies within the media, the Democratic Party and the Justice Department and declassify all the documents requested by House Republicans. This includes the complete application used to apply for FISA court approval to spy on your campaign aide, Carter Page.

2)    “You’re Fired.” Time to dust off the old phrase from your hit TV show and clean house by firing the “Deep State” operatives in your administration. This includes the ones who are leaking to the press and the ones who are actively trying to thwart your agenda. U.S. Senator Rand Paul (R-KY) has a good suggestion, start using lie detectors. This also includes the feckless U.S. Attorney General Jeff Sessions and the untrustworthy Deputy Attorney General Rod Rosenstein.

3)    Border Wall. Stand firm on this most vital issue. If the money is not allocated for this project, the government must be shut down. We desperately need a border wall to stop the flow of illegal immigrants. You campaigned on this issue, it was a major part of your platform and being firm on this issue will motivate your base to vote in huge numbers in the mid-term elections.

4)    Media Blackout. It is time to stop giving interviews to hostile media entities like Reuters, Bloomberg, etc. These liberal “news” organizations are completely antagonistic toward your agenda and attempt in every way to harm you.

5)  Reward Conservative Media. In return, there are many conservative commentators and hosts who would be happy to interview you. It is good that you appear on Fox News, but there are other outlets that you should support.  In fact, I’ll gladly make my radio and TV program, Ringside Politics, available to you at any time. On our programs, you will not be subjected to hostility and will be treated fairly.

6)   End White House Press Conferences.  Free your hard-working Press Secretary from the drudgery of dealing with mean spirited, nasty liberals in the White House Press Corps who only try to pose gotcha questions and harm your administration. These attack dogs should not be assisted in any way.

7)    Keep Tweeting. This is best way for you to communicate an unfiltered message directly to the American people without the bias of the hopelessly liberal mainstream news media. This sidesteps a corrupt press that provides 90% negative coverage of your administration.

8)    More Rallies. Keep scheduling these popular events all over the country. It motivates the base, draws tremendous crowds, provides an opportunity for you to speak to the American people and helps candidates in tough mid-term elections.

9)   No Special Counsel Interview. Under no circumstances should you be interviewed by Robert Mueller or his team of attack dog Democrat attorneys. This is a perjury trap, an attempt to end your presidency. Whether the questions are in writing or not, there should be no cooperation with a team of illegitimate and probably illegal investigators who are solely focused on your political destruction.

10)       Reward Loyal Supporters. Stop reaching out to Democrats, they are trying to remove you. Also, stop filling your administration with “Never Trump” and establishment Republicans. These people are not committed to your presidency and your agenda and certainly do not care about the “deplorables.”

Mr. President, if you implement these suggestions, not only will the Republicans win the mid-term elections, but you will be re-elected in 2020. The stakes are high, and the future of your presidency and the country is at stake, so it is essential that you take such advice from people like me who have your interests at heart as well as the interests of the American people, Otherwise, the toxic “swamp” will win once again, and the consequences will be devastating.