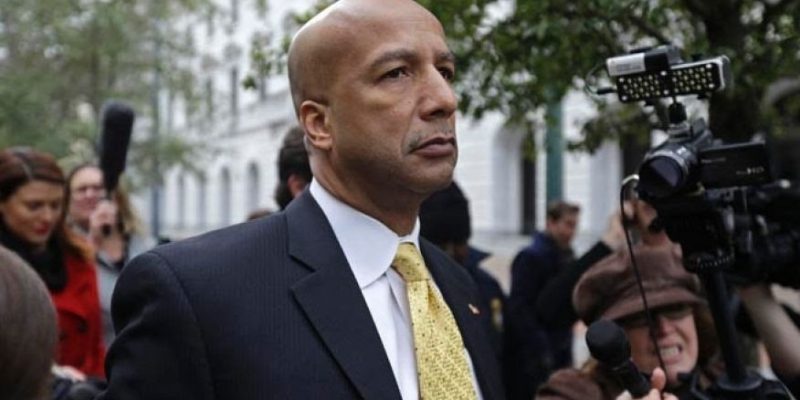 Former New Orleans Mayor Ray Nagin was sentenced to 10 years in prison for bribery, money laundering and other corruption that spanned his two terms as mayor — including the chaotic years after Hurricane Katrina hit in 2005, the Associated Press reports.

Nagin was convicted Feb. 12 and sentenced to ten years, less than half of the time prescribed by the law, by U.S. District Judge Helen Berrigan last week. He was convicted for accepting hundreds of thousands of dollars from businessmen in return for being granted work from the city or Nagin’s support for various projects. Nagan’s bribes allegedly involved $500,000 in cash, free vacations, and free truckloads of granite for his family business.

The 58-year-old Democrat defiantly denied any wrongdoing after his 2013 indictment and during his February trial.

Nagan made no apologies in court before or after the sentence. Instead, he said, “I trust that God’s going to work all this out.”

Nagin is scheduled to report to federal prison in Oakdale in September.

Judge Berrigan noted the serious nature of the crimes, but cited several factors that contributed to her decision to depart from sentencing guidelines that could have put Nagin away for up to 20 years. She noted character references showing Nagin to be a devoted son, husband and father. She said, despite his crimes, Nagin displayed “a genuine if all too infrequent” desire to help New Orleans and its residents after the 2005 catastrophe.

Nagin was first elected in 2002, casting himself as a reformer who hoped to crackdown on the city’s corruption. But this didn’t take very long to change, according to federal prosecutors, who argue that corruption began in his administration during Nagin’s first term– and flourished in his second.

Nagin was first indicted in 2013. According to court documents, prosecutors were pushing for a sentence of more than 20 years under federal sentencing guidelines.

Defense attorney Robert Jenkins said that was tantamount to “a virtual life sentence” for Nagin.

Prosecutors said the schemes that led to Nagin’s conviction included two family members: His two grown sons were never charged with a crime, but they were part of the family business that received free granite from a contractor. They also said that what Jenkins calls an “aberration” from Nagin’s “model behavior” included behavior that spanned six years and involved multiple contractors.