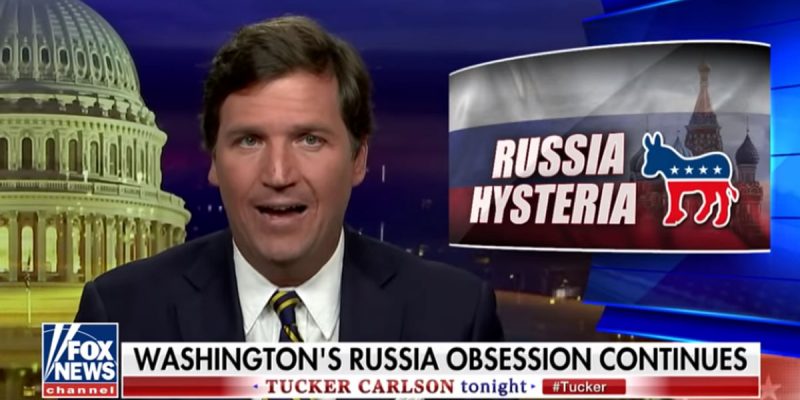 If we’re going to continue with the partisan charade that is the Robert Mueller investigation of the baseless allegation that somehow Donald Trump colluded with the Russians to steal the 2016 investigation, perhaps, for fairness’ sake, we should also launch an investigation of the collusion that the monopolistic multinational leftist organization known as Google engaged in with Trump’s 2016 opponent Hillary Clinton.

We should do this, because earlier this week Fox News’ Tucker Carlson exposed an e-mail from a Google vice president of “multicultural marketing” named Eliana Murillo which shows that Google went to some pretty fair depths to put its thumb on the 2016 electoral scales. The e-mail by Murillo, sent the day after the election and distributed throughout the company, describes multi-faceted efforts made by Google to boost Hispanic turnout in the swing states of Florida, Nevada and Arizona working with the leftist pressure group Voto Latino, and expresses horror at a 29 percent share of the Latino vote going to Donald Trump, which was enough to help Trump win the election.

It’s likely that Carlson obtained this e-mail due to his relationship with Harmeet Dhillon, who is the attorney for former Google engineer James Damore – Damore is the newly-famous conservative who was fired last year from Google after circulating a memo inside the company complaining about its political monoculture and offering a common-sense rebuttal to the cultural Marxist bent of so much of the company. Dhillon has appeared as a guest on Carlson’s program multiple times, and the Murillo e-mail is just the sort of thing that discovery in Damore’s lawsuit against his former employer could be expected to turn up.

Needless to say, a bright-line admission that it engaged in electioneering on behalf of the Clinton campaign – Murillo goes so far as to call the Hispanic turnout efforts a “silent donation” to the Clinton campaign never disclosed to the Federal Election Commission – should be cause for a major investigation. Congress has been quite involved in the topic of bias and censorship within the platforms run by America’s tech giants already, but Google’s efforts look like a clear violation of federal campaign laws which should arouse the interest of a U.S. Attorney – or several.

We’ll be interested to see if anything comes of this. The facts don’t appear to be in any significant dispute.