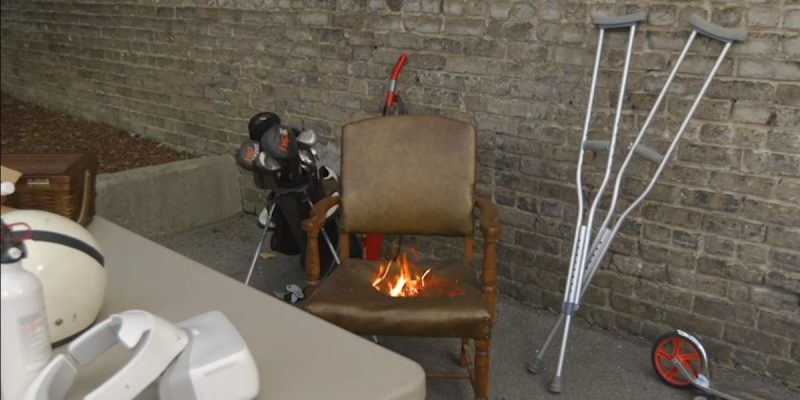 If you haven’t seen this, get ready for a treat – it’s a new installment of the delightfully funny SEC Shorts video series. Turns out an LSU fan is having a garage sale, and one of his surplus possessions available to a willing buyer is the proverbial “hot seat” that Ed Orgeron no longer needs to occupy thanks to his team’s impressive 3-0 start…

Orgeron is now 34-33 as a head coach following Saturday’s dramatic 22-21 win at Auburn, including a 9-2 mark in his last 11 games. Both of those losses, to eventual national champion and to Notre Dame, who finished last season No. 11, were to highly-ranked teams – and Orgeron now has three Top 10 wins in that span – over Auburn last season and over Miami and Auburn this season. And Orgeron can boast of coaching the current No. 6 team in the nation, which is the highest ranking LSU has possessed since Nov. 1 of 2015, when the Tigers checked in at No. 4 in advance of a loss to Alabama which sent the program into a tailspin that ultimately cost Les Miles his job.

This doesn’t mean Orgeron is completely out of danger as LSU’s head coach. He has to make sure the Tigers don’t collapse the rest of the way this season – and with road games at Florida and Texas A&M and home games against Georgia, Mississippi State and Alabama Orgeron still has to navigate a schedule which includes five current ranked opponents. Things could still turn sour.

But one doesn’t get that impression from watching Orgeron’s team in its first three games. This is a team with a dominant defense and excellent special teams, and while the LSU offense is still very much a work in progress there is evidence quarterback Joe Burrow is right when he says it’s going to be very good when it all comes together. Burrow’s sub-50 percent completion rate is a glaring problem which likely has much to do with his receivers’ inconsistent ability to get open, not to mention the still-developing chemistry between the new quarterback and his largely-new skill position colleagues, and the offensive line isn’t a finished product either.

But Saturday against Louisiana Tech should be the first time all season LSU will start the same five linemen in back-to-back weeks, and that ought to help solidify a running game which was better than expected against a rock-solid Auburn front. It should also help create a clean pocket for Burrow going forward, with games against Tech and Ole Miss in the next two weeks. Time to throw and more experience with his receivers against secondaries not quite as good as those Miami and Auburn offered should help to bring the passing game around; there is clearly talent on the other end of Burrow’s passes.

Interestingly, Tech’s defense is likely a tougher test than Ole Miss will offer in two weeks – and not just because the Rebels gave up 41 points to Southern Illinois and 62 to Alabama in their last two games. What Tech offers is a pair of defensive ends in potential 2020 high draft pick Jaylen Ferguson, a senior, and sophomore Willie Baker – plus cornerback Amik Robertson, a player with whom LSU flirted in the 2016 recruiting class who has gone on to become one of Conference USA’s best defensive backs.

For now, though, Orgeron is riding high and deserves to be. If nothing else he’s certainly transcended his poor reputation as a head coach coming off his 10-25 mark in three seasons at Ole Miss from 2005-07. Since that time, about which the coach has said he made lots of mistakes he’s learned from, Orgeron is 24-8, which is a .750 winning percentage only 10 coaches of Power 5 schools can match or exceed.

He’s not that 10-25 coach anymore. It’s too soon to say Orgeron has proven himself to rank among the SEC’s highest-profile names, but Orgeron is earning the right to be considered as one of the better SEC coaches, and this might be his breakout season.

If nothing else, he does appear to be off the hot seat. At least for now.