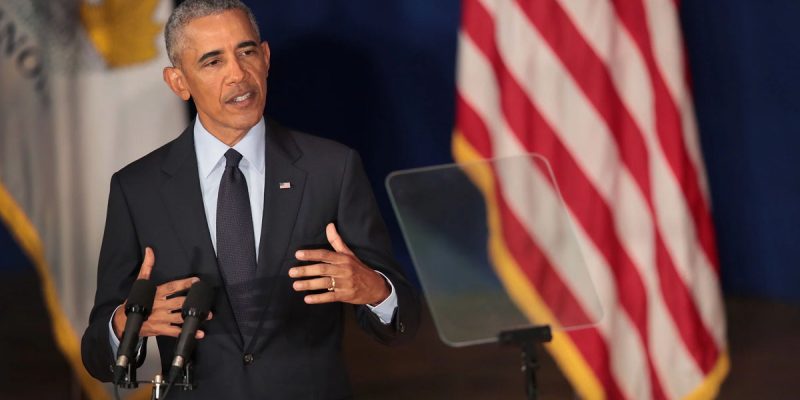 On Friday September 7, the so-called “mainstream” media celebrated the return of Barack Obama to the national discourse with his speech at the University of Illinois.

In many ways this was a return to the Obama of old, the Obama who oversaw the decline of the Democrat party on every level—local, state and national—and ushered in a new era of “Democratic Socialism” in which the party became dominated by an increasingly unhinged group of radical Leftists. During what can only be referred to as a 64-minute tirade, Obama referred to himself 102 times. In other words, this was classic Obama.

Obama is the only person I know that is asked to give eulogies at funerals and proceeds to talk about himself.

But enough about Obama’s overrated “style.”

The substance of Obama’s speech was outrageously specious. The media fawns over his every word and purposely fails to fact check what he says. And when you fact check Obama you end up realizing that, not only is the guy a huge egomaniac, but he’s a hypocrite and a liar too.

Obama referred to a rise of “white nationalism and racial division” and blamed the Republican party. Blaming the Republican party ignores the role of violent groups like the Black Panthers and Black Lives Matter, both of which gained substantially during the Obama years.

Who can forget the refusal of the Obama Justice Department to pursue voter intimidation charges against the Black Panthers who were on TV intimidating voters outside polling places on Election Day 2008?

And who can forget the display in Ferguson, Missouri in which black nationalists displayed pro-ISIS signs? For those with a bad memory, Obama himself fanned the flamed of racial division there by personally perpetuating a false narrative about the shooting death of Michael Brown.

Obama is at it again, issuing a ridiculous warning about “white nationalism.” The fact is, the white nationalist movement is a tiny fringe element with no following to speak of. In reality, it’s main side-effect has been to whip up paranoia by the likes of Barack Obama and his radical Leftist followers.

It’s quite instructive to note that, in his Illinois speech, Obama decried “the politics of division, resentment and paranoia” in the Republican party but made no mention of Antifa and all the truly crazy activity we have seen on the Left to tear down our institutions and disrupt our constitutional republic.

The fact is, political violence has been more of a hallmark of the Left than the Right in recent years. Just ask Steve Scalise.

Obama’s hypocrisy reached a climax in the speech when he accused the Republicans of “cozying up to the KGB” and Vladimir Putin…The fact is the Trump administration has ramped up sanctions on Russia far beyond what Obama was willing to do and who can forget Obama’s cryptic subservience to Putin caught on a hot mic?

Obama accused President Trump of “capitalizing on resentments that politicians have been fanning for years.” Clearly, Obama should know all about that.

Obama displays a deluded view of history, most clearly illustrated when he takes “credit” for winding “down the wars in Iraq.” Let’s be clear: what Barack Obama did, by any objective measure, was prematurely withdraw US forces from Iraq at a time when there was hardly any combat left there. The direct result of his feckless Iraq policy was the rise of ISIS and a Jihadist bloodbath that is still being battled back against to this day—all unnecessary and all because Obama was CLUELESS (or perhaps worse) about the threat from Jihad.

Adding to Obama’s outright lies on national security in the speech, was his repeated claim that he “got Iran to halt its nuclear program,” a verifiable lie—the JCPOA did nothing of the sort. What his “deal” with Iran DID accomplish was to hand over billions of dollars to the genocidal ayatollahs and the regime that has been described as the world’s foremost state sponsor of terrorism.

“It should not be a partisan issue to say that we do not pressure the Attorney General of FBI to use the criminal justice system as a cudgel to punish our political opponents.”

“I complained plenty about Fox News—but you never heard me threaten to shut them down, or call them enemies of the people.”

Actually, what the Obama administration did to critical journalists was much worse than that. Did Obama just forget that his administration secretly monitored Fox News reporter James Rosen. Even Leftist journalists admitted at the time that “for the first time ever, a presidential administration is treating news reporting like a crime.”

Then there’s the case of Sheryl Attkisson, who was similarly targeted, but faced stonewalling by the Department of Justice and the FBI.

The problem was, no one held anyone accountable for these activities. Now we know how Obama was able to get away with all this: he had scoundrels like Andrew McCabe and Peter Strzok carrying his water and running cover for him.

So Barack Obama can take his righteous indignation and sanctimony and go back to where ever he was before he resurfaced in Illinois. We’ve heard it all before and we aren’t buying his baloney anymore.

Interested in more national news? We've got you covered! See More National News
Previous Article VENABLE: Time To Turn Up The Heat On Lawsuit Abuse In Louisiana
Next Article Hollywood Star Invites An Assassination Of The President